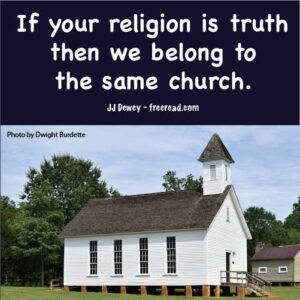 DK says this: “Their (disciples) task is to develop “the mind that is in Christ” and as they do so, they will help make clear the way for “the coming of His feet,” as the Bible puts it (Heb. XII.13). Seeing life and events in the light of the spiritual values, as He does, will facilitate the giving out of the new teaching and will provide the skeleton structure of the new world religion, thus giving us a fresh view of divine intention and a living insight into the minds of Those Who implement the divine will and are the engineers of humanity’s future. Let us, therefore, try and appreciate not only the opportunity which Christ has to help us (which is the usual presentation), but let us look also at the crises and problems with which He is confronted as He faces the work which He must do.” Reappearance of the Christ, Page 67

DK often talks about a universal religion that will emerge out of the many religions. Here he tells us that it is the duty of disciples to think as the Christ and provide a skeleton structure for this new world religion.

Now whenever someone talks about a world religion many conspiracy people conjure up images of the Beast forcing some particular religion upon the whole world. This is a far cry from that which DK is speaking. What those concerned about one world government and religion overlook is this.

A one world religion (as well as government) is inevitable, is a part of social evolution and there is nothing we can do to prevent it.

The question is not, will it happen, but how it will happen? In other worlds, is the one world going to be controlled by the forces of light or dark, by freedom or force?

Because of the principle of dominating good, domination by evil is temporary, but it can control for an uncomfortable period of time. The chances are that the one world we have will be a world dominated by Christ and the kings and priests (disciples) under his dominion.

Question: What do you suppose will be the ingredients of the one world religion? How long do you suppose it will take to materialize? What will happen to other religions? What can we do as disciples to help?

DK pointed out that the new religion will take the best out of the old. He says:

“To sum up: Because of the divergences of the many exoteric faiths, the multiplicity of the sects and cults in both the Orient and Occident, and the quarrels of theologians over words, phrases and interpretations, the sons of God-in process of development-are left without the needed help to contact the Christ and His great group of disciples, the spiritual leaders of humanity; the way to Christ, the living, loving Expression of God, is not made clear to the seeker. Together, the two great Sons of God present to mankind-the One in the East and the Other in the West-a complete and perfect representation of Deity; by Their lives and words They guarantee to man the possibilities always latent in the human spirit.

“Today the Christ and the Buddha wait until the hour strikes. Then Their united effort, plus the invocative appeal of all who truly know and truly love, will bring humanity the new revelation for which they wait.

“The new world religion must be based upon those truths which have stood the test of the ages. This I said elsewhere and enumerated four of those truths:

“The Fact of God Man’s Relationship to God

“The Fact of Immortality and Eternal Persistence The Continuity of Revelation and the Divine Approaches.

“These four facts are basic realities and truths which have conditioned the masses of men for aeons. Human unhappiness is founded primarily upon man’s inability to live fully in the consciousness of these four fundamental realisations. But they are steadily taking shape in human thinking, and for them the United Nations fights.

“Two more great and foundational facts are also part of the human state of awareness.

“The fact of our relationship with each other. This is as much a foundational spiritual fact as is God Himself, because it is linked with our knowledge of Him as Father.

“This relationship we call brotherhood and it expresses itself (or should I say, it will eventually express itself?) through human fellowship and right human relations. For this we work, and humanity is moving towards that relationship-and that in spite of the fact of war.

“The fact of the Path to God. Awareness of this has been preserved for us down the ages by those who knew God and whom the world called mystics, occultists and saints. Opening out before aspiring men stretches the Way. The history of the human soul is the history of the search for that Way and its discovery by the persistent.

“In every race and nation, in every climate and part of the world, and throughout the endless reaches of time itself, back into the limitless past, men have found the Path to God; they have trodden it and accepted its conditions, endured its disciplines, rested back in confidence upon its realities, received its rewards and found their goal. Arrived there, they have entered into the joy of the Lord, participated in the mysteries of the kingdom of heaven, dwelt in the glory of the divine Presence, and then returned to the ways of men, to serve. The testimony to the existence of this Path is the priceless treasure of all the great religions and its witnesses are those who have transcended all forms and all theologies, and have penetrated into the world of meaning which all symbols veil.” Externalization of the Hierarchy, Pages 403-405

Secondly, he tells us of three teachings which will exist in the future religion:

“As we look ahead into the world of tomorrow and begin to question what structure the faith of humanity should assume and what building the skill of the knowers will erect to house the religious spirit of man, three more fundamental truths appear to be emerging as necessary adjuncts to the revealed body of truth:

“[1] The demonstrated existence of a Spiritual Hierarchy, the life-purpose of which is the good of humanity. The Members of the Hierarchy are seen to be the Custodians of the divine Plan and expressions of the Love of God.

“[2] The development of the Science of Invocation and Evocation as a means and method of approach to divinity. This will grow out of the ancient habits of prayer as used by the masses, and the practice of meditation as developed by the mystics and occultists. Prayer and meditation are the preliminary steps to this emerging science, and what is vaguely called “worship” is the group effort to establish some form of united approach to the spiritual Hierarchy, functioning under the guidance and control of the Christ and related to the highest spiritual centre, Shamballa, through its most advanced individuals, just as humanity is related to the Hierarchy by its spiritually minded people.

“[3] The realisation that the starry heavens, the solar system and the planetary spheres are all of them the manifestations of great spiritual Lives and that the interrelation between these embodied Lives is as real and effectual as is the relation between members of the human family.” Externalization of the Hierarchy, Pages 415-416

Finally, he talks about three festivals which will be celebrated:

“Let me indicate the possibilities of such spiritual events, and prophesy the nature of the coming world-wide Festivals. There will be three such major Festivals each year, concentrated in three consecutive months, and leading therefore to a prolonged spiritual effort which will affect the remainder of the year. These will be:

“[1] The Festival of Easter. This is the festival of the risen, living Christ, the Teacher of all men and the Head of the Spiritual Hierarchy. He is the Expression of the Love of God. On this day the Spiritual Hierarchy which He guides and directs will be recognised, and the nature of God’s love will be emphasised. This festival is determined always by the date of the first Full Moon of spring, and is the great Western and Christian festival.

“[2] The Festival of Wesak. This is the festival of the Buddha, the spiritual Intermediary between the highest spiritual centre, Shamballa, and the Hierarchy. The Buddha is the Expression of the Wisdom of God, the Embodiment of Light, and the Indicator of the divine Purpose. This will be fixed annually in relation to the Full Moon of May, as is at present the case. It is the great Eastern festival.

“[3] The Festival of Goodwill. This will be the festival of the spirit of humanity-aspiring towards God, seeking conformity with the Will of God and dedicated to the expression of right human relation. This will be fixed annually in relation to the Full Moon of June. It will be a day whereon the spiritual and divine nature of mankind will be recognised. On this festival, for two thousand years, the Christ has represented humanity and has stood before the Hierarchy and in the sight of Shamballa as the God-Man, the Leader of His people and “the Eldest in a great family of brothers” (Romans VIII:29). Each year at that time He has preached the last sermon of the Buddha before the assembled Hierarchy. This will therefore be a festival of deep invocation and appeal, of a basic aspiration towards fellowship, of human and spiritual unity, and will represent the effect in the human consciousness of the work of the Buddha and of the Christ.

“These three festivals are already being kept throughout the world, though they are not as yet related to each other, and as part of the unified spiritual Approach of humanity. The time is coming when all three festivals will be kept simultaneously throughout the world, and by their means a great spiritual unity will be achieved and the effects of the great Approach so close to us at this time will be stabilised by the united invocation of humanity throughout the planet.” See Externalization of the Hierarchy, Pages 420-421

“It is useless for the sheep to pass resolutions in favour of vegetarianism while the wolf remains of a different opinion.” William Ralph Inge (1860 – 1954)