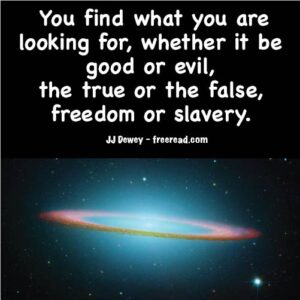 On hindsight a handful of possible UFO sightings were made before 1947, but after the first one was nationally reported in 1947 (by Kenneth Arnold from Idaho) then the number of such sightings increased a hundred-fold. In other words, when people’s imaginations were stimulated, their imaginations created more sightings.

A while back there was a group in Boise who would meet weekly and always see UFOs. I was curious so one week I went along with them. We all looked up in the sky for a while until one of the group said “there’s one,” pointing her finger at the sky.

I looked up and said, “That’s not a UFO, that the planet Venus.”

The group seemed downcast after I spoiled this sighting and saw nothing while I was there. When I left I felt that if I did not correct the lady that the whole group’s imagination would have been triggered and they would have seen all kinds of things as they usually did.

Then another time there was a guy who led a group to UFO sightings who claimed to be able to call them down and talk with the captain of the ships telepathically in the process. I never did get in on this bunch.

Reader: You say that people from other planets fold their bodies up into the spiritual in order to transcend the speed of light, but they can only do this with their own bodies. They can’t transport other things like seeds and animals for which they would need ships. Well that explains why the Avatar of Synthesis can’t manifest physically- we’ve been visualizing him with clothes on! lol 🙂

They have the technology to do this with their ships also and all that is within them.

What makes us so special that, out of all the trillions of planets in the universe, advanced lives would want to pay attention to us for the purpose of stimulating our growth? What’d they do, draw from a lottery and it just so happened to be earth’s lucky day?

JJ: I never said that we are one out of trillions. I said that planets with advanced technological life is fairly rare. There are still quite a few in the galaxy, but it will take a lot of searching for the SETO program to find another like earth. The ones that do exist will eventually populate the neighbor worlds. We will cross the ocean of space and find new worlds occupied by natives just as we crossed the ocean on the earth and found what we saw as primitive people.

Reader: What was so special about the year 1947 that people started reporting seeing UFOs at that time but not previous? Why not 1847?

JJ: This was shortly after the development of the atomic bomb. Neighboring lives are paying more attention to us, but the sightings also stimulate the imagination creating many false sightings and contacts. Many are also deceitful, looking for attention.

Reader: What would be the purpose for etheric beings visiting humans while they’re in a quasi-dream state?

JJ: Most of these instances are imaginary, but the ones that are not are probably for research of some kind.

Reader: Do crop circles have anything to do with the UFO phenomenon? If not, what causes them (the unexplained kind, not the man-made kind)?

JJ: I’ve not sought the answer to this, as it is a low point of interest to me. If I had to guess I would say they have nothing to do with UFOs.

If ETs are using these to communicate with us they are doing a poor job for no one I know has received a usable message from them.

Reader: If humanity blows itself up before this coming cycle of flooding or where the oceans rise, then what’s the difference, when the Earth will inevitably be changing through the coming ice age anyway, and if we are not prepared for it, then we are history?

JJ: An ice age would not destroy all life on earth just as it did not last time, but it would surely make life uncomfortable for some. In fact there are many parts of the earth that would remain tropical. It is estimated that in the United States most places north of about where I live in Boise would be covered with Ice.

This would include cities such as Seattle, Chicago, New York as well as most of England. The interesting thing is that global warming caused by human intervention may actually make the ice age a little more palatable or possibly negate it.

There are lesser and greater ice ages. Some have come so quickly that it has frozen mammoths so fast that they have undigested food still in their mouths.

I do not expect the big earth changes in our lifetime, but we must prepare so the lights of the not-so-distant future can be salvaged.

The big advantage of the gathering in our time is that we have an opportunity to lay a foundation for a system that emphasizes the spiritual while maintaining maximum individual and group freedom.