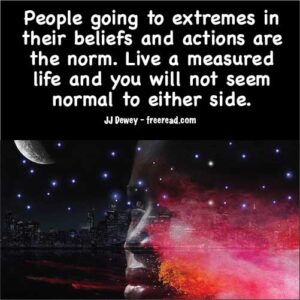 A reader comments: “If our awareness of our visiting ET neighbors can help solicit their mediation in keeping us from blowing ourselves off this planet, then an understanding of who they are theologically is invaluable. Furthermore, if some of the ET neighbors hanging around have malevolent designs on us, viewing us as mere chattel for harvesting and slave labor, using our world governments to exercise such control over us, then soliciting the assistance of the benevolent faction would be appropriate, to level the playing field.”

JJ: I do not see any physical ETs as being in on a conspiracy to control the earth and they are not in cahoots with the government, but the Dark Brotherhood is in this system and some are cooperating from other systems. These operate through subtle communications and influence and not as ETs, except as impersonating them if it serves their purpose.

Reader (written 2004): “If our planet is slated for wipe-out in 2012, by an asteroid on a fixed course, for example, and life will be as impossible here thereafter as it is on mars now, and an escape is necessary, then it seems that soliciting benevolent ET assistance in preparing for some sort of exodus would be prudent.”

JJ: Our planet will still exist as is after 2012 though there will be points of tension. The main thing we have to fear is ourselves and disciples need to work with solving problems more than expecting the end of the world, or being saved by ETs.

Reader: “My theology does not see the earth becoming permanently uninhabitable after 2012. I do believe that the earth will be transformed, and that 2012 could be a purging event that does the trick.”

JJ: The transformation will be one of slow and steady progress (with a few spurts forward and backward) rather than a giant purging that leaves only the spiritual minded left.

JJ: The real baptism of fire is very far into the future, but we could have a minor one before the new age.

One of the problems with prophesy is that the visionary will often see far into the future as if it is the present and write about it as if it will happen tomorrow. When seeing through the cycles of time it is difficult to predict in real time when events will manifest. The visionary must descend to his concrete mind anchored in time and put everything together.

JJ: Of much greater concern (in the category of natural calamities) for the immediate future is the coming ice age – though the release of excess CO2 may reduce its effect. The earth has one about every 11,000 years and one is due soon. Some think it will begin anytime. I think it will start within 150-200 years. This gives us some time to prepare for gathering the lights into floating (as well as possible airborne) cities on the oceans where they will be out of harm’s way of this and other earth changes.

Reader: “So also, I would think that there will be an escape vehicle humungous in scope, to repopulate the earth after its baptism by fire. Some individuals may be spirited elsewhere, transplanted. But I would think that the ideal fate of our group evolution would be to stick around here and repopulate Earth. I cannot fathom that such a feat could be accomplished without the assistance of advanced ET races willing to assist.”

JJ: It is up to the Hierarchy of the earth to guide and save us. If we destroy ourselves then we will have to start over. It is unlikely all human life will be destroyed even if we do our worst. If this were to happen we could then be reseeded or stimulated by the Brotherhood from other systems.

Reader: “What about the cities that were taken up – Enoch, Salem, Melchizedek – with a return slated after the earth is cleansed? Was the purely a function of a divine miracle moving people and soil? Where did they go? Or were there ET races involved in those transplantations, moving a whole society from this planet because they had transformed high enough spiritually?”

JJ: I believe the city of Enoch was not physically taken into heaven. The truth is indicated in this scripture: “And he beheld, and lo, Zion, in the process of time, was taken up into heaven. And the Lord said unto Enoch: Behold mine abode forever.” Moses 7:21

Notice that it was through “a process of time” that the city was taken into heaven. If a large land mass were merely removed and translated this would have been a quick occurrence. Why did the ascension of Zion take a process of time and why is it called God’s “abode forever” if it is only a terrestrial order?

The answer is that the people who resided there achieved spiritual liberation and either died or ascended to the spiritual city of the New Jerusalem which John tells us in Revelation is God’s abode. Those who find the Heavenly Jerusalem have found the city of Enoch.

After a period of time when all the lights of the city died or ascended then it seemed that Zion was no more or it had fled and only the telestial order of the dark and dreary world remained.

Reader: “Did they (Ets) have a Jesus Christ in their past history? Did they have a Moses? Did they have a Noah? An Adam? A Joseph Smith? A latter-day David? An anti-Christ? 666? How ubiquitous are these motifs in the progression of civilizations elsewhere in the universe?”

JJ: Each Earth-like planet with intelligent physical life will have inhabitants going through a similar process of evolution to ourselves. A handful in the galaxy are ahead of us in technology and consciousness, many are behind us. In saying this, one needs to keep in mind that there have been past universes, galaxies and solar systems where previous humans achieved relative perfection and mastery of the physical worlds. However, in this round of creation human evolution is yet young in the universe. Our Elder Brothers from a past round are now our Gods and tutors.

The earth is one of the few physical planets which has received extra stimulation from liberated masters of past creations.

The inhabitants of each planet eventually receive soul contact and one in particular will master Soul and Spirit to become an example to all of the Christ consciousness and thus attain the position of Christ on the various worlds. Many humans have similar experiences and also different ones in the course of their evolution, even so, do the races of the various planets. In the end (of their evolution) they all learn the same lessons and come to the same conclusions.

Reader: On a general progression chart, how far along are we in relation to the Extraterrestrials involved heavily with our planet? 1st grade? 5th?

JJ: If, by Extraterrestrials you mean all people living on the various planets whether they fly in spaceships or not the answer would be we are in the top 95%.

If you are only talking about ETs in ships which include those in the etheric matter then our state of progression is much lower by comparison.

Reader: “What sort of technologies can they bring to us as we engage them? Health remedies, energy solutions, transportation solutions, pollution remedies, spiritual teachings?”

JJ: “Virtually none. The progress we have made is due to our own efforts and the efforts of the Masters to assist us. The current crop of Masters have all come from this earth or been here for some time.

An exception to this is after times of great destruction there will be assistance in seeding the earth for renewed growth and there may be some truth to the idea in circulation that we have recovered some crashed UFO’s.

There is one great truth from the Star Trek series and that is the Prime Directive. The great lives in the universe have learned that the less they help the better is the end result and the more profound is the learning of the various people on the varied planets.

One of the dangers we face on earth, because of the little assistance we have received, is that we now have the capacity to blow ourselves back into the stone age but not the maturity to insure we will exercise the proper self-control move safely into the new age.

With a little luck we hope to move into a new age of peace and avoid an end of the world scenario that so many accept as our fate.

“Perhaps the most valuable result of all education is the ability to make yourself do the things you have to do, when it ought to be done, whether you like it or not. It is the first lesson that ought to be learned.”