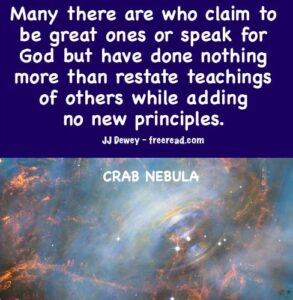 A reader noted that a self-proclaimed prophet has published a new version of the Sealed Plates of the Book of Mormon and wanted to know what I thought of it.

I always find it interesting to check out the claims of the various messiahs, mighty and strongs, prophets, and now there seems to be a competition to be the one who reveals the sealed plates of the Book of Mormon.

There are at least three others with versions of the Sealed Plates, with more to come I am sure.

This latest claim is by an individual named Christopher Nemelka who was once a janitor at church headquarters as well as a member of a Fundamentalist sect. He has a polygamist past and makes the most fantastic claim of any of these prophets so far, stating that Joseph Smith actually gave him the golden plates and he currently has them in his possession and claims to have shown them to a number of friends, though none have come forward to verify seeing them.

Now on many visionary claims one can dismiss them as possible astral deceptions, but in this case, where he claims to have the physical golden plates in his hands available to the touch, there seems to be only two possible conclusions. Either he has the plates (or some semblance of plates) or he is outright lying.

How do we know for sure?

The answer, as always, is to look to the soul to verify any principles that are taught. If there are no principles which are taught then the writing becomes highly suspect for the Brotherhood of Light largely communicates in principles.

I have read a few things in the book, but of course, haven’t had the time to read a lot. So far I haven’t found any new principle expounded upon.

Secondly, I haven’t read anything so far which has registered with my soul as light.

Thirdly, I have found some odd teachings that are difficult to swallow such as:

(1) Gay men are attracted to other gay men because they are possessed by female spirits who follow Lucifer who give them a desire for those of their own sex.

(2) God is a polygamist who impregnates his wives with a command from his body to the female body. So much for a continuation of regular sex to which the Mormons are looking forward. He doesn’t explain how one individual and a couple wives created many billions of spirit children or how each one could have time to know his Father.

(3) He seems to present a similar doctrine to the Aryan Nations that Adam was a real human whereas other humanoid animal men existed who were blacks and other non-white races.

(4) Everyone knew before they were born if they were going to the Celestial, Terrestrial or Telestial; kingdoms and will dwell in those kingdoms for all eternity with no chance for advancement.

(5) Our sun provides the source of light to all the other stars.

(6) The earth was created at the edge of the universe, beyond which was only darkness.

(7) The planets all rotate in the same direction (not true)

(8) Mercury is the Celestial kingdom, Venus is the Terrestrial and Earth is the Telestial.

(9) He apparently has a year in mind for the return of Christ, but I couldn’t find it.

(10) The United States is the most evil nation in the world. He calls it “the seat of Satan.” Sounds a lot like a Taliban left over. (11) The rich nations, especially the U.S., are responsible for the tsunami catastrophe in Indonesia.

(12) Almost all technology is evil, the use of oil is evil, space exploration is evil, business is evil, cosmetic surgery is evil, and the use of the earth’s resources is evil. It appears that he wants us to live in a much more primitive state than the Amish. He claims God will destroy all our universities and institutions of higher learning.

These are a few items I have discovered through reading just a few pages. Heaven only knows what I would come across if I read the whole thing.

If good is moving forward in evolution and evil is to move backwards it sounds like this guy is on the side of moving backwards.