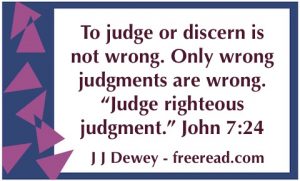 The Right to Judge

Question: If it creates bad karma to murder wouldn’t it also produce a similar bad karma to sentence a killer to death?

If it were to produce negative karma to administer justice through judges then this would mean that all the judges of all the nations are in a precarious situation indeed and all judges should be dismissed and no punishments administered.

Actually the truth is the other way around. If the judge is just he creates positive karma because he helps society and aids in protecting the innocent. But if the judge judges badly either too harsh or too soft then he may incur bad karma. For instance, the guy in Florida named Joseph P. Smith had many arrests and just received a slap on the wrist before he killed the little girl in the news. Several judges may incur some karma here because they did not do their job in protecting the innocent.

A judge who administers fair justice does not incur negative karma, but the opposite because of the good outcome.

Question: Aren’t we guilty of murder if we agree to the death penalty?

JJ: Where do you get this idea? If we follow this reasoning then we must also be guilty of having slaves if we support sending someone into the slavery of prison or even fine him and make him work like a slave to repay his debt.

Logic alone tells us this is not the case.

Any time true justice is administered there is no negative karma and nothing to feel guilty about.

In the commandments of the Bible where we are told “thou shalt not kill…” The word kill comes from the Hebrew RATSACH which is more literally translated as “murder.” The word kill in relation to war or administering justice uses other words that mean kill, which is different from a criminal murder.

Melody: What would you say, if somebody drives under the influence of alcohol and kills one or more people in a car crash, should we agree on the death penalty?

JJ: The person is responsible for the death, but did not commit the crime intentionally. A death by accident is much different than first degree murder. Therefore, the death penalty would be overkill. Society does need to be protected from him and he should be forced to pay recompense to the victim. If he doesn’t learn his lesson he will suffer the loss of a loved one in some future time through criminal neglect. Then he will understand his crime.

Question: Do we have the right to judge others?

JJ: Definitely in situations regarding civil law. This is why every nation, city and state has judges. This idea of judging criminals has universal support. If society is not protected from criminal civilization would fall apart. This will continue until a much greater portion of humanity become enlightened.

Question: What about someone who is sentenced to more than 20 years who is not a murderer? Who perhaps is in prison for fraud or kidnapping where no life has been taken.

I am assuming that the 20 years = a life principle would stand and you would advocate capital punishment for anyone sentenced to more than 20 years? Or would it be judged on a case by case basis?

JJ: I think it should be judged case by case. There are some crimes that may be as bad a murder such as rape, child molestation and abuse. I wouldn’t feel it injustice to administer the death penalty to some of the worst of these, but whatever the case, society needs protection from them one way or another until they become harmless.

One of the problems with long prison sentences are the conditions within them. Sure these guys have made mistakes, but there is much more we can do to aid them on the course of true rehabilitation. Such a course would in the end be best for all of society, the criminals and the victims as well.

But this is another topic and we’ll have to cover it later.

Since we have been speaking of prisoners I thought I would include a touching letter I just received from one here in Boise. This prisoner has read most of the archives and just finished Book III.

I have donated quite a few books to prisoners as anything which will redirect their attention is a good investment indeed.

The Immortal series is going to be to illusion what the atomic bomb is to World War II! What a mind blowing experience I had reading Book III. The book was pure electricity – wow! I am beginning to visualize the significance of the Keys. After reading Book III I can see that each Key is a single part to a greater mechanism. A mechanism that if an individual accepts each key and applies a working practice to it, will become something incredible. Each Key needs to be understood and grafted into the belief system and strengthened with exercise. When all 12 Keys have been assembled into the belief system it is my guess that that individual will have the instrument in place that will enable him to manifest the fullness of the light, love and power of God to the sons and daughters of mankind.

How bitter sweet it has become for me to read your teachings. Tears come to my eyes when I ponder the vast amount of truth I have received from you, and the possibility of my positive development as a result. But my heart weeps that I have rendered myself useless to you. I truly wish I could be helping you right now… I often feel like my team is going to the superbowl and I have removed myself from play. I am so sorry for my part in the mess I am in, and sorry I’ve become a deficit for my team.

I will continue to implement the Keys into my belief system. I will continue to battle to get out of here. I feel I have a couple touchdowns in me and I’m hoping that circumstances will bend to my will so that I can contribute.

I am no longer a victim – I accept full responsibility for my situation in life. I’ve dug myself into a deep pit and I’m going to have to climb out myself – I feel strongly that I can get it done.

This reminds me of something else. Some time last summer I went to the New Jerusalem in meditation and asked the question: “What past life deed was responsible for this life’s prison experience?”

The scene I was shown was an army. I was one of the leaders. We were all on horses. I had a large red cape. We rode our horses full speed into battle. At this point I remember being surprised that I felt absolutely no fear but an anticipating excitement, sort of like pre-sex excitement. I did not see the battle but I saw myself in the midst of a ruined city rummaging through rubble looking for a box. I looked in every direction – the city was reduced to rubble and every man, woman and child had been killed. Then I had the horrible feeling that in some way I was responsible.

So, if I saw this correctly this means that much like yourself I’ve got some serious debt to pay. I must have selected to make a partial payment when I designed this prison experience for this life. I’m not interested in trying to get out of paying my debt. What I’ve decided to do is take your lead .. I’ve decided that I will change (adjust) my life plan. I’ve decided to switch my form of payment from sitting in prison to service to the Brotherhood.

I think that whenever this decision can be made with sincerity and right intention that it becomes a blessing for all involved. So I’m deciding to make it so. I feel good about it.

JJ: Comment: One can surely sympathize with him here. He has discovered truths which has changed his life and which he wishes to share with the world, but is confined to prison where he is very limited in what he can do.

He is one of the few who is indeed making the best of an awkward situation so when he is released there is a strong possibility that he will take the lessons learned and be of great service to the world.

His crime didn’t cause any permanent harm to anyone and was influenced somewhat from a bi-polar disorder that was not taken into consideration at the trial. He wound up with a much longer sentence than one with his temperament deserves. The possible answer to this was in the vision he saw.

“Greatness does not have to be explained.” John Stolworth