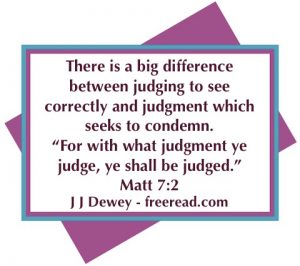 Reader Comment: The way you live your life in this time is based on your actions. The law of karma does not judge or punish it is the law of cause and effect.

Whether the effect is seen as punishment or reward depends on how we define our terms.

If someone murders (cause) then he will generally pay though being murdered (effect). 99% would probably interpret this as a punishment of some type.

Comment: Each incarnation you decide what part of yourself you want to work on in order to choose the setting of your life.

JJ: This is true of disciples. However many average people have karma that they are reluctant to work on and are guided into the correct situation through their souls. The thief rarely wants to volunteer to be stolen from, so his higher self makes the arrangements so he can learn his lesson. Sometimes this plays out within the lifetime of the crime contrary to the will of the criminal.

Comment: Now if a murderer chose this part of him/her to work on are we not taking his/her opportunity away to do so by putting him/her to death?

JJ: How can he work on it in a prison cell? The effects in prison do nor harmonize with the crime of murder unless he is killed by fellow prisoners. Sitting in a cell, meditating, sleeping reading and watching TV does not pay the debt for the crime of murder. A life in prison usually delays his progress because he has to wait longer for his next life where he can be placed in the appropriate situation by his soul to learn his lesson.

Comment: I don’t understand how we have the right to kill the killer?

JJ: If the state acts as an agent of karma and carries out an effect equal to the cause there is no additional karma created. The two forces are neutralized.

Common sense and logic in examining cause and effect is the final judge.

Question: Would it not be better to put somebody in jail and have him/her generate positive karmic credits so that a person can atone for his/her crimes by good works. Just like the person I know is adding good to mankind by saving a lot of life’s!

JJ: The vast majority add to their negative karma serving long prison terms whereas most improve their situation with karma through death and rebirth. Which makes the most sense?

Even if a person does good works in prison he will do little to pay for the crime of murder. He may pay off other debts from karma if is he is in that fortunate minority. In rare cases, if he saves a life by risking his own he can pay some of the debt for murder.

This is an emotional issue and many just feel that the state does not have the right to give the death penalty – just because… But feeling does not make it so. To find the truth we must rise to the plane of the mind and using the powers of logic, reeason and understanding examine cause and effect for how it plays out in real life.

Another hurdle that makes it difficult to surmount emotional feeling in looking at this is that many see death as the absolute worst thing that can happen to a human being. This illusion causes many to go to extremes to surmount the death penalty. In addition, this illusion also causes many to seek to preserve life even though the person is in great pain with no hope of recovery.

If we realize that there are many things that are worse than death then it ceases to be the boogieman that scares us into clinging to life at all costs.

Even Jesus, when he decided he did not want to suffer anymore, decreed: “Father receive my Spirit” and voluntarily “gave up the ghost.”

DK tells us that we will all eventually learn how to do this – that when any further physical existence is no longer useful we will just will ourselves to pass on to greener pastures.

Here’s a couple quotes from DK

“They make a horror out of death, whereas death is a beneficent friend.” Esoteric Healing, Page 42

“Through death, a great at-one-ing process is carried forward. In the “fall of a leaf” and its consequent identification with the soil on which it falls, we have a tiny illustration of this great and eternal process of at-one-ing, through becoming and dying as a result of becoming.” Esoteric Psychology, Vol 2, Page 173

Those who are against the death penalty make the argument that life is sacred and should be respected no matter what.

The question to ask, however, is what is life?

Much of the world sees life as only an existence within the physical body and apart from the body is only death. This is misleading. Death is not no existence, but merely a separation. In fact, the best definition of death “to be separated from” a body.

Thus at physical death we are merely separated from the physical body and our focus of attention is upon another body – what is called the causal body in esoteric writings..

“Nothing can take or touch the life” as DK says.

This lack of a physical vehicle is definitely a hindrance, especially if it was to aid you in the performance of a designated service, but is this the worst thing that can happen to a human being?

No there are a number of things that are worse.

To be deprived of liberty is worse than death as was realized by many reformers of the past such as Patrick Henry who stated: “Give me liberty or give me death.”

Secondly, to be in a situation where the entity is descending away from the soul with no turnaround in sight is much worse than death.

Many of those in prison are in this second state and definitely the first. There are a few who increase in spirituality, but there are far too many who receive a negative influence from the people who surround them. The average person will be strongly influenced by those around him and if all he has for company are criminals who see themselves as victims that need to get even then this produces a downward spiraling force that is difficult to resist.

Question for consideration: Does this mean that if one finds himself in an awkward situation in life that he should commit suicide then? Is suicide ever justified?