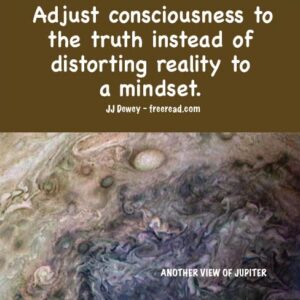 Question: DK says “the counterfeit always guarantees the true.” He was saying this in relation to the coming of Christ, but consider that he is touching on a true principle here.

What counterfeits exist in our present world that foreshadows the good, the beautiful and the true?

We received a variety of answers on this. Some of the answers concentrated on illusions rather than counterfeits. It is important to make the distinction. All illusions are not counterfeits, but all counterfeits have some illusion in them.

A counterfeit is a distorted replica of a real thing of value. On the other hand, many illusions represent nothing of value, but just lead us on a wayward path.

In pointing out the counterfeit principle DK was talking about the problematic counterfeit of Second Coming of Christ. Many there are who either believe or proclaim themselves to be Christ come again.

In my opinion we really haven’t had a good counterfeit of Christ yet. None of these false Christs have been able to speak eternal words or display the spiritual power that Christ did 2000 years ago. This fact will not prevent more false Christs from appearing however.

So, what are some more counterfeits?

A reader mentioned “The One Mighty and Strong” expected by many LDS people. The orthodox Mormons pretty much ignore the prophesies about this entity, but the fringe element look forward to this person perhaps more than Christ himself and people are coming out of the woodwork claiming to be this being.

The trouble is that all these people claiming to be Mighty and Strong are showing neither might nor strength. Many of them cannot even take care of their own needs. Even so, according to DK, these counterfeits are a testimony that the real thing will arrive at some time.

If they (Christ and the One Mighty and Strong) came together and announced who they are, the thinking part of society would merely say, “Oh, no, more crackpots.” The real thing will not have to wave his hands and say “look at me and see my greatness.” Instead, he will demonstrate greatness through his works and his words.

When Jesus was here the thought in the mind of those who saw him was not, “Here is the man who claims to be the Christ.” Instead, it was, “Who is this man of mighty works and wonderful words? Could he be the Christ?”

The idea of the utopian society where true equality exists has been in the mind of man from the beginning. Yet each one we see in recorded history had flaws and fell apart, thus making them counterfeits. Even so, all these counterfeits guarantee to us that the real thing will materialize sooner or later. Let us hope it is sooner.

Artificially flavored foods are counterfeits of the delicious foods that are also good for you.

If we see artificial maple syrup on the stands it bears a witness that somewhere there is a real maple syrup.

Indeed, we have artificial flavors of almost every food showing up these days?

Could this be a symbol that the food we feed our souls is also artificial in many cases? I think so.

Drug highs are counterfeits of being high on the spirit. This is a good point and something I have believed for many years.

Back in the Sixties many people were taking drugs thinking that it gave them a spiritual high. The feeling they had was a counterfeit, but it was a testimony that the real thing does exist.

Another says, “Perhaps humanity through free will, chose to become counterfeit of its true self.”

Question: Didn’t God counterfeit (imitate) Himself through His own reflections?

No. If you take a bar of gold and make an exact duplicate it is not counterfeit but the real thing with the same value as the original. A counterfeit would be lead covered with gold paint or plating. The counterfeit does not have the value of the real thing.

God originated from a point, a monad, And so did we. This is why Jesus said, “Ye are Gods.” That point is beyond time and space and never had a beginning for either of us. We are not counterfeits, but an extension of the real and true life of the One God.

A reader says, “A counterfeit is a copy of the real thing made with an intent to defraud. Let’s not forget the definition of the word – INTENT is a key part of it.”

The true counterfeits of God are the dark brothers who defraud us by setting themselves and their pawns up as unearned authorities demanding our reverence.