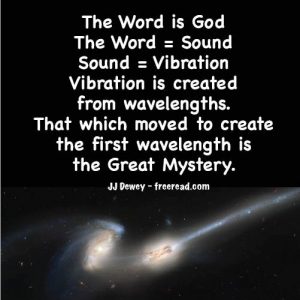 The Name of God

Reader Comment: What you have quoted from JJ Dewey is a derivation of the translations of M. Buber who suggested that “ehyeh aser ehyeh” should be translated as “I will be as I will be” and expounds it as a promise of God’s power and enduring presence with them in the process of deliverance. However, when Moses addressed God, with some reluctance, he asked “When .. the children of Israel .. shall say What is his name ..”, “mah” is used to express “what” wheras in normal usage, the pronoun used is “mi”. The use of “mah” is to invite an answer which goes further, and gives the meaning “what” or substance of the name. It is in this context that the translation is accepted to be “I AM THAT I AM”, and He said “Thus shall you say unto the children of Israel I AM has sent me unto you”. By this, Moses would not think that God was announcing a new name, nor is it called “a name”; it is the inner meaning of the name Moses knew. What follows adds weight to this .. “Yahweh, the God of your fathers, the God of Abraham, the God of Isaac, and the God of Jacob hath sent me unto you: this is my name forever”. (Dr) Aiden O’Leary Onetime Lecturer in Ancient and Modern Hebrew.

JJ: If you are indeed an expert in ancient and modern Hebrew you will be aware that most scholars do not agree with what you say here. Whereas I AM THAT I AM is the traditional rendering most knowledgeable translators see this as a simplistic inaccurate wording.

You say The use of MAH is to invite an answer which goes further, and gives the meaning “what” or substance of the name.

I would say that since MAH invites a meaning with substance then the translation I AM BECOMING fills the bill much more than I AM.

Let us quote the verses using the Concordant Version which I deem to be the most accurate English translation available:

“Yet Moses said to the One, Elohim (God): Who am I that I should go to Pharaoh and that I should bring forth the sons of Israel from Egypt?

Some manuscripts use the word EHYEH here so this verse could read:

“Then he said I AM BECOMING with you…”

Now this is an interesting thought. God not only becomes that which he decides to become within his own being, but he is BECOMING with and through Moses.

In other words, Moses was told to not fear because part of God’s BECOMING was to take place through the oneness of Moses and God working together with one purpose as one being. This is also true for us. God works through each of us and BECOMES who He decides to be through us so long as we follow the Spirit of God within each of our inner selves.

Let us continue with the Concordant translation:

“Now Moses said to the One, Elohim: Behold! When I am coming to the sons of Israel, and I say to them, The Elohim of your fathers sends me to you, then they will say to me, What about His name? What shall I say to them?

“Then Elohim spoke to Moses: I shall come to be just as I am coming to be. And he said thus shall you say to the sons of Israel, I-Shall-Come-to-Be has sent me to you.”

Then in the footnote alternative renderings are given. Let me quote:

“I shall come…coming to be. Literally: I AM BECOMING, or as traditionally rendered, I am that I am.”

Scholars agree that Yahweh is a more correct rendering of the Tetragrammaton (YAV HE VAV HE) than is Jehovah. So keep in mind that Jehovah and Yahweh are one and the same.

Now when God says “this is my name,” was he talking about Yahweh or I AM BECOMING?

An interesting note here is that even though the name Yahweh (or Jehovah) seems to be a new revelation to Moses it is a fact that the name was mentioned over 160 times in the book of Genesis (before the birth of Moses) But then, the Bible seems to contradict itself in Exodus 6:3

“And I appeared unto Abraham, unto Isaac, and unto Jacob, by the name of God Almighty, but by my name JEHOVAH was I not known to them.”

So why did God say this when Jehovah was written over 160 times in the book of Genesis?

So why was this revelation of the name to Moses such a big deal when the Israelites already seemed to have the name?

Perhaps this quote from my book will clarify:

John pulled out his old Bible again and opened it to Exodus chapter three and asked me to read verse 14. I read the words: And God said unto Moses, I AM THAT I AM: and he said, Thus shalt thou say unto the children of Israel, I AM hath sent me unto you.

“This is pretty much the standard translation in most Bibles, but it is a very bad one and most honest Hebrew scholars know this. In the Hebrew it reads: I Am Becoming that which I Am Becoming. Go say to the children of Israel that He who Is Becoming has sent you.

“The ancient Hebrew is much different from the English you are used to. It always had gaps in it that were to be filled by either the obvious or by the intuition. Now let me tell you plainly the answer that Moses heard. As you remember, Moses asked God what His name was. To this question God said: You ask for my name so you will know who or what I am. This I cannot give you because I Am Becoming that which I decide to Become. Go tell the children of Israel that He who is Becoming has sent you. John paused a moment. “Now tell me how you think Moses understood this answer.”

“I think you’ve turned on a light in my head,” I said excitedly. “Here’s the way I see it. As you said, in that age, a name revealed the core essence of who the individual was and Moses was expecting an answer like this from God. In other words, he thought he might get an answer like I am the great and powerful one, or something like that. Instead, God told him that He cannot give Moses a standard name because He is in the process of becoming whatever it is that He wants to become. Thus any name given to Him at one time may not apply at a future time.” From The Immortal

I AM BECOMING THAT WHICH I DECIDE TO BECOME (EHYEH ASER EHYEH) was a long name and considered sacred and beyond the understanding of many so it was shortened to Yahweh, Jehovah or YHWY.

Now it is true that the word “decide” is not literally in the Hebrew as we know it but this meaning is implied in numerous ways. Many scholars see the implication of cause in the sacred name. In other words, the Hebrew indicates that something is creating causation or initiating. Those who see this would translate it as something like “I will cause to be that which will be.”

Now consider this – is there any cause without decision? No. Decision is cause – BE-CAUSE.

God told Moses that he would BECOME in him and cause a deliverance for the Israelites. Essentially God BECOMING in His servants to create cause is God causing to be that which he decides to be.

It is written that “ye are gods” and we are in the “image of God.” If this is true and we are true to our destiny then we should wisely make decisions and cause them to come into being. In other words – become an initiate. This thought is also in very close alignment with the Greek word for faith (PISTIS).

No wonder it is written: “For without faith it is impossible to please God.” Faith brings decision into being and through faith we manifest the name of God becoming in

Question: “I just recently read the Aquarian Gospel of Jesus the Christ by Levi and found myself contemplating on several versus. One of them has to do with God’s name. You mentioned that a more accurate translation from the Hebrew writings regarding the name of God is: I AM BECOMING THAT WHICH I DECIDE TO BECOME (EHYEH ASER EHYEH). I understand this but what did Levi mean in 96:17 “The name of God man may not speak with carnal lips; with Holy Breath alone can man pronounce the name.”

Also, it is mentioned several times within the book that Jesus always spoke “the Word” before he performed a healing/miracle. In this book, Jesus mentions that the “Word” is only revealed to those who are one with the Holy Breath. Is this “Word” the name of God?

JJ: You cannot pronounce the name of God by merely being taught the letters or normal sounds that you commit to memory and repeat.

The name of God must be spoken on four levels. These levels are the physical, emotional, mental and the soul, or spiritual.

The essence of the name is realized when the speaker understands that he is to BECOME as he decides to become when that decision is in harmony with the will of God. If we are one with God then all decisions will align automatically with that Will for our vision of the perfected future will be seen through eyes of higher understanding.

The name of God includes more than your own becoming for in the end all souls are one. Becoming, or evolving toward ultimate perfection within the various spheres, is the destiny of all the sons and daughters of mankind. Therefore, when you see a brother in need and you see him as becoming perfect with you, you are speaking the name.

The four levels it must be spoken are as follows:

This has been physically represented in a number of different ways – Yahweh, Jesus Christ, Allah, Krishna etc. In addition to this there have been special sounds given to initiates and methods of intoning them. But there is another way to physically sound the name of God. In the midst of healing you will be given a mystic phrase corresponding to the BECOMING that is to transpire. This phrase is usually spoken and communicated by the healer to the mind and soul of the person for whom it is intended.

One (of many) of these phrases spoken by Jesus, for example, was: “thy sins are forgiven you.”

This was what this person needed to hear to BECOME well.

This was given through the soul, at this particular time, to Jesus as a name of God to be spoken as intoned by the Holy Spirit.

The name the initiate speaks must be sent forth with a fullness of feeling and love as it is understood on the emotional plane.

The mind must see the name BECOMING perfectly manifest. If a healing is being performed then the vision of wholeness (holiness) must be seen.

“Perfection brings imperfection to the surface. Good drives evil from the form of man in time and space.” Djwhal Khul

What I present here is only a seed thought in the direction of understanding the name of God, but if one allows the seed to be planted, nurtured and grown to fruition then such a one will go forward and do “even greater works” than did Jesus as he predicted.