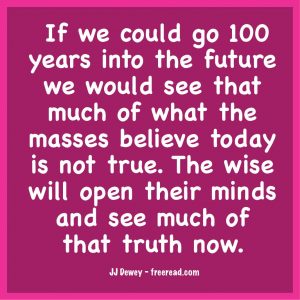 The Masters, Devachan and Harmlessness

Question: why did DK channel through AAB, when a Master like Jesus could have? Can only Masters who vibrate on certain rays come through to an earth person?

DK is one of the younger masters, only about 300 years in the same body. He received this time consuming job for three reasons.

(1) To free up the time of the senior members of the Hierarchy so they can do their lines of work. The work of the Hierarchy is much more extensive than is realized by disciples. They not only work with human affairs but with all the kingdoms of the earth. This ranges from contact with Shamballa to working with the animal, vegetable and mineral kingdoms, not to mention the deva.

(2) Even though he is a young master he has done much more extensive personal research on the rays and initiations than have some other Masters. Thus he was well qualified to release the needed information.

(3) He needed this assignment to complete his fifth initiation so he can move on to the sixth.

Question: How do the Masters know everything that happens here on Earth?

They do not know everything that is happening. They have the capacity to tune into a person or situation, or even see a picture of the whole, but there are many things they do not see.

The Ancient of Days is the only one here of evolution high enough to be aware of all earth lives at the same moment. This is because we are all esoterically a part of his one body.

A Master may be in close communion with maybe a dozen disciples and then the disciple is in contact with his various students. The Masters are not God, but are more advanced than us humans.

It is not the job of the Masters to work with average humanity. This is the work of the solar angel and its reflections in the material world.

Everyone who is seeking receives all they can handle whether they realize it or not.

I was asked how much time we spend in the after life between lives. The time between lives once averaged 1000-1500 years, but not any more with the current population explosion. DK says there are 60 billion monads designated for this planet, but some of these are not incarnating at present, waiting instead for a period of peace and relative enlightenment.

From my personal research I would say the current time between lives is around 200 years on the average.

Question: How do we know we aren’t already in Devachan right now on Earth when all this could be just part of the whole illusion?

I think almost everyone has asked themselves a question like this including average people who have never heard of the devachan. I think I first had a thought like this as a small child. I would ask myself something like:

“How do I know I am really here and not just dreaming? Wouldn’t it be something if I woke up and found I was really someone or something else?”

The philosopher Descartes asked himself questions like this and he concluded that there was only one thing he knew for sure. He expressed it in the famous phrase: “I think therefore, I am.”

I think that many of us sometimes wonder if life is a dream because all of us have progressed through numerous lives and each time we die it is a little like waking up from a dream and upon crossing over (before entering devachan) physical life will have seemed like a dream.

I’ll bet life seemed like a dream to Marylin (a Keys member) when she was faced with entering that light during her recent heart surgery. We are glad though that she stayed in touch enough to come back to us.

Here is the Key to a happy existence:

No matter where you find yourself accept your circumstances until you have knowledge to produce better circumstances. Having made that acceptance move ahead following the highest you know. When you find “the good the beautiful and the true” incorporate it into your life and continue onward.

Actually, one difference between earth life and devachan is that every project there ends with wonderful success, but here one has more failure than success. This is the lone a dreary world on the outside. Devachan is a bright and glorious world where all our dreams come true.

In devachan we rest and if we labor, even work seems to be a rest.

On earth we labor by the sweat of our brow and undergo great struggle.

We know for sure we are here on the earth and not dreaming, or in devachan because there is struggle, pain, disappointment followed by a little joy and accomplishment now and then. Here is where we build our spiritual muscles. I say this with the realization that from a higher reality this is also a dream.

Question: Why practice harmlessness? Are we supposed to let negative people just walk all over us?

Good question. When we are living in rough surroundings with others who may not believe in, or even understand, harmlessness it may seem almost futile to practice it for some benefit in some far future life.

There are several corrections to this attitude which is helpful.

(1) Harmlessness is not negative passivity, but a positive approach. DK makes this clear also in his writings.

Sometimes it is right to turn the other cheek, but no rule applies in all circumstances.

What would have happened if we just sat around and sang Kumbaya as Hitler was taking over the world? Would our passive approach had been a harmless one?

The fact is this. More often than not the harmless path requires the disciple to take some type of positive action with a view of creating the most beneficial, least harmful results. In the case of World War II the most harmless path was to defeat Hitler.

Consider the life of Christ, the most harmless of us all.

Did he make people angry?

Yes. But it was not his fault. Instead, it was the fault of the emotionally based people who resisted his teachings.

Now remember the Pendulum Principle and the Middle Way. Just because the harmless path sometimes creates conflict do not get the idea that this will be the normal result of harmlessness.

More often than not harmlessness will create peaceful surroundings, but there are exceptions with results going to the other extreme. True harmlessness requires great power of judgment.

(2) Harmlessness has benefits in the here and now.

The first benefit will be an inner peace that filters down from your soul because you have made the correct choice. This benefit alone is well worth the cultivation of this principle.

The second benefit comes in the realization that many benefits of karma come within the current life. Some of the biggies are delayed to a future life because the circumstances to even things out completely are not available in the present one. Even so, we reap much of what we have sowed in the present life. I am 58 (in 2003) and the older I get the more I realize this is true. Again and again I see that people reap in later life that which they have sowed earlier.

Then too often there are often immediate results. This principle is illustrated in the scriptures:

Quite often the harmless approach will keep the budding disciple out of a lot of trouble. He will not run from trouble but he will not react with harmful words just to be gutsy or prove a point.

(3) It is true that to perfect harmlessness one must learn the art of detachment from the ego and lower desire nature. One must see himself as the observer and make decisions based on what is best for the whole rather than the individual self. This is difficult, but in the end it works out best for the whole as well as the parts.

Someone asked about Steven Wright whom I quote. He is a famous comic and my favorite.

Here is his most famous quote:

“I bought some powdered water, but I don’t know what to add to it.”