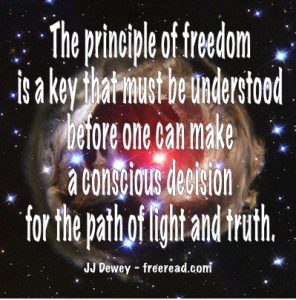 Earlier we talked about the great decision where the advanced disciple clearly sees the dividing points between the path of light and the dark. We mentioned three things he can do to make himself ready.

(2) Seek to become pure in heart and become he who has pure intent.

Question: Is the putting of Self first taught anywhere in new age philosophies as well as old time religion? Give examples.

Both old time and new time religion seems to be telling us to put the self first. This is partially the result of us passing out of the age of sacrifice?

The truth is both extreme views of dealing with self are destructive. If we put our self on a lower footing than others then the principle of equal rights goes out the window and we set ourselves up to become victims.

For instance, if there are four pieces of pizza and five individuals, including yourself and you sacrifice by giving up your piece then you have become a victim and done yourself as much of a disservice as if you had denied a piece to another.

On the other extreme let us say you need two pieces of pizza to be satisfied and you take more than your share so self can be gratified at the expense of others. This is the selfishness that, if persisted in, leads to the temptation of the dark side.

They key to correct direction of self is to seek the good of the group to which you are a part.

In relations with the family one must seek the good of the whole in areas where actions of self and family are interlinked. This applies to civic, religious and national groups with which the person identifies.

Some teachings in circulation push us in the wrong direction by telling us that only by putting self first can we be of use to others. It is true that the self must be taken care of, but the attitude in so doing is one of the dividing points between light and dark.

Serving self for the purpose of self is the dark path. But serving self to maintain vital strength to serve is the path of light.

This applies to true seekers, for average humanity serves self for the sake of self. A person has to reach a certain degree of evolution before he can have an understanding of true service to the group. Only when this understanding comes can he make unselfish decisions in preparation for the great decision.

There is a principle that the disciple must understand and learn to apply before the great decision toward the path of light can be made. I am talking about the principle of freedom. The Brotherhood of Light seeks to amplify this principle in others, whereas the Dark Brothers believe that self can only be exalted by restricting freedom in subordinates..

Both the conservatives and liberals, old age and new age religions have their pet freedoms that they wish to restrict.

Can you name some freedoms on both sides of the pendulum that those in illusion wish to restrict? What is the only reason that freedom should ever be restricted?