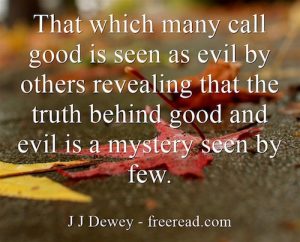 One who makes a reversal and takes the dark path is not in denial but does so motivated by selfishness and knows what he is doing. On the other hand, such a one encourages the denial in others to accomplish his objectives. He will also use denial when it suits his ends even though he knows the denial is a lie.

Those caught in the loop of denial and suppression are usually sincere people who are deceived into thinking that not facing friction and life’s problems head on is for the best at the moment. This lessens the soul energy, but the person usually turns around after enough pain if caused by this error.

A reader claimed that a focus on good creates evil.

This idea that any focus or recognition of good is through fear of evil or lack makes no sense.

If I am driving down the road the good is to drive down the road to my destination. The evil is to not steer correctly and drive off the road. As I put my attention on the good (staying on the road) I have no sense of any lack of ability to steer or anything else. I also have no fear of driving off the road because I feel competent. By keeping my attention on the good the opposite of what you say occurs. I have no sense of lack and no fear.

There is no denial on my part. I realize the possibility of driving off the road, but have no fear because of the knowledge of driving I have that allows me to avoid this possibility.

Good and evil and the dualities are not created by our thoughts but exist independently. Night and day will continue to exist whether we are here to think about them or not.

If this is true then why doesn’t it work out as you say in real life??? I have focused on good all my life and my fears have become less not greater. This is also the case with everyone I know who focuses on the good.

Reader: “So long as there is judgment involved as to right and wrong, good and evil, where ever there is a conscious attention, there will always be an unconscious attention which will create the opposite of the perceived need or focus.”

I have judged what is good and evil all my life and where my point of focus is, is what has been drawn to me. Again my experience testifies to the opposite of what you say.

In fact one of the most important lessons I have learned in my life is to keep my focus on the good and the desired goal without wavering if I wish to achieve. This has also worked well for Bill Gates but in as different area than my attention dwells.

I see a thread of truth in what you are saying in the fact that many deny their fears and illusions as they seek to progress toward the good. This indeed does create many problems, but it is the denial and suppression that is the problem – not any attention one has toward the good.

A reader pointed out that the Christmas season represents the longest days of the year in the southern hemisphere and the shortest in the North.

North in the Biblical Hebrew is TSAPHON which is associated with mystery and literally means “hidden” or “occult.” This backs up the symbolism that behind the fact that the celebration of the birth of Christ is at the time of the least physical light has a hidden significance. It is like the Cliché says: “It is always darkest before the dawn.”

On the other hand, the fact that Christmas is at the time of greatest light in the South also carries much meaning as Christ came as a “light to the world.”

Comment: “The Practice of handing out brightly wrapped gifts from underneath the Christmas Tree on December 25 designed to spread “Good Cheer” originated from the Northern European practice of the sharing of fluorescent red and white hallucinogenic mushrooms of the variety Amanita muscaria ..”

Very interesting; as far as words from ancient languages being translated into modern vernacular goes – many are correctly not translated literally. For instance, as you examine the passages in which TSAPHON was translated North you can see that they are indeed referring to the direction of North as opposed to South or an ancient city. But you can also see why they used the word TSAPHON for that particular direction. It means “dark” or “hidden” and the further north you go the darker it gets. Thus the ancients associated TSAPHON with North.

Many words in ancient languages are like this and it is much better to translate them with the best current word than the source word. Using source words only will often give a misleading translation.

What Concordant people do is first examine the source word. Then they examine the context of the word in all ancient passages they can find and attempt to find the word that fits the best in all the writings. When they decide upon the word, they will use that word consistently unless some type of obvious exception occurs. By using this method I have found their translation is far superior than any other I have examined.

You can find a link to the Concordant Bible HERE

A reader was arguing with me that 2+2 is not always four and presented different numbering systems and nomenclature to prove his point.

I am familiar with the binary system and in this or any other numbering system 2+2=4, but is merely written differently.

For instance if you write 2+2 =4 in Spanish this does not change the mathematics.

Let me put this challenge before you.

If you take two apples and add two additional apples you will get four apples. Let me challenge anyone to use the binary or any other system and cause any other sum to appear than four apples.

What I find interesting is that this reasoning is very simple to a child. It takes adults to complicate truth to the extent that it becomes as perplexing as counting rabbits running around in a fog.

Let me end with this question:

Two people have the same question and receive the answer through intuition yet explain it a little differently to others. What causes this different description of the truth? Did they receive two conflicting truths or was it something else?