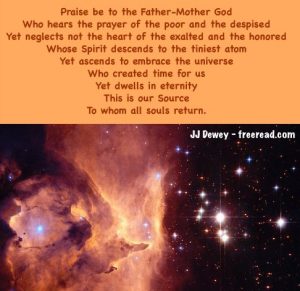 The Fall of a Sparrow

In answer to this statement:

“The main point of God’s attention in this universe (we are talking about the physical universe) is humankind.”

To this a reader objects saying that all creation has God’s attention.

Perhaps it would be helpful to expand on my comment. Notice that I said that mankind is the “main” point of God’s attention in this physical universe. Gods does have some attention several measures above and below man, but the main focus is humanity as it exists in it variations throughout the universe.

Let me enhance this through the Law of Correspondences again. When we see light we see the colors of the rainbow which are seven colors and combinations thereof. Now in addition to these seven colors there are many more vibrations of light that we cannot see. On the higher frequency side we have the ultraviolet lights and in the lower frequency we have the infra red. Now even though these are invisible to us as we use our normal focus of attention, the higher and lower spectrums are still there doing their job and are accessible to our eyes with special instruments.

Now since we are reflections of God what does this correspondingly tell us about the attention of God?

It tells us that He has access to all kingdoms, but his attention or vision is focused on seven kingdoms corresponding to the seven colors.

These seven kingdoms are (1) the mineral, (2) the plant, (3) the animal, (4) the human, (5) the Masters or Hierarchy, (7) Shamballa and a mysterious sixth kingdom of intermediaries. This sixth kingdom corresponds to indigo in the spectrum and just as it is difficult to detect in the rainbow even so this kingdom does not have an isolated location.

It is composed of three groups:

(1) Disciples and initiates incarnated in the human kingdom as transmitters of energy and wisdom from the higher kingdoms.

(2) Nirmanakayas who are sixth and seventh degree initiates and are channels of energy and intelligence between the Masters and Shamballa. This is a higher correspondent of the disciple in mortal flesh.

(3) The third group are very high entities called the “Knowers of Purpose.” And are transmitters of intelligence from extra planetary non physical intelligence. These beings are eighth and ninth degree initiates.

These three groups compose the agna center of the earth, its third eye or the sixth kingdom.

Thus we have the attention of God focused on the seven kingdoms on the earth. The lower three are progressing toward human form and consciousness and the higher three are passing away from it, yet still connected to it. The human kingdom is thus at the midway point between the higher and lower kingdoms.

The attention of God therefore circulates through human form and consciousness down through the lower three and up through the higher three in physical and etheric matter.

As far as physical reality goes then His prime attention is on the midway point between spirit and matter, which is soul which is represented by the human kingdom. However his consciousness circulates through the lower and upper three kingdoms. God is omnipresent because all lives are an extension of his consciousness, even the sparrow, and this is why He is aware even of the fall of a tiny bird.

The reason God has His consciousness in the seven kingdoms with man as a point of focus at the midway point is because all of these kingdoms are progressing toward relative perfection. Without the attention of God conscious entities would be blocked in their progression and could never reach this divine status.

Now the atomic and subatomic world has reached this relative perfection. As we mentioned the proton is such a perfect particle that it has a life span of trillions of years. In eternities past the attention of God worked through the atomic world until this relative perfection was reached with the greatest creation from that endeavor being the living cell. The cell itself is relatively perfect, but is capable of alteration from higher intelligence from the seven kingdoms. Cells seem to have some imperfection as John pointed out, yet this imperfection within the cells will disappear and they will resume their relative perfection when the human kingdom has obtained a new measure of progress.

In other words, cellular life is relatively perfect, but this perfection is distorted by evolving human consciousness.

Because life on the cellular level and below has obtained this relative perfection, this allows them to function with the precision of a computer program. We all know that when a computer program is perfected (or shall we say relatively perfect) that it then performs all of its complicated functions at the touch of a keystroke. The programmer no longer has to put attention on the programming or telling the software what to do. The program does not need instructions from a higher source for all the instructions are built into it. Most programs even have a help command that allows the greater life (computer operator) to learn all that is necessary to execute the built in intelligence.

Thus on the cellular level on down where we see relative perfection; there is no need for the attention of God for all is on automatic pilot. However, human and its associated kingdoms in this reality need a lot of help and thus God will keep his attention focused in our direction until the desired order and perfection is accomplished.

What will happen then?

When we reach a point where any additional attention of God brings us little or no improvement and our program cannot be replaced with any higher version (speaking symbolically) then the attention of God will shift to higher kingdoms and through the principle of the Molecular Relationship and identification our attention will shift in alignment with that of God. Until that day comes we (the human kingdom as a whole) will have a full understanding of what it means to be one with God.