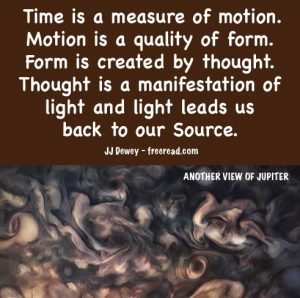 The Factor of Time

A reader asks if one can say the Song and still be affected by negativity.

The answer goes back to the recent discussion on perfection. We do not start out being perfect in anything we do.

The most perfect man who lived was Jesus yet even he was not able to heal everyone and there was far from perfect peace wherever he went. Some got violently angry and even tried to kill him and eventually did crucify him.

Jesus gave the most perfect prayer of the Piscean age which said: “Thy will be done on earth as it is in heaven.”

2000 years have passed and the prayer is not yet fulfilled. Does this mean the words failed? No. Much more of God’s will is now done on the earth today than it was back then. Even though perfection is not yet achieved after 2000 years a very powerful advancement has been made.

Now let us consider the Song. It has two effects which are for the individual and the group. The most important purpose of it is its end effect on the whole, but the individual will also receive benefit from saying it.

There has never been a time that I have said it that I did not feel additional light and peace. Did it make my state of mind and consciousness perfect? Of course not, but each time I have said it I have noticed a positive effect which was directly in proportion to the amount of thought and attention I put on the meaning of the words.

Remember the teaching is that the Song is not actually sung until correct thought follows the words. Just saying the words alone is not “singing” the song.

The second benefit is toward the group and the world itself.

Remember that I have taught several times that in each age of recent history the lights have been defeated and their light has been replaced with corruption of the light.

To bring in the new age it is all important that the lights prevail against the darkness that seeks to corrupt and destroy. The goal of the Song is that the cumulative effect of singing it, as we pass over the cusp of the new age, will generate enough light, love and power to sustain the lights so the coming Aquarian Age will be one of peace, abundance and light – one where corruption will be the exception and not the rule. This time the will of God is that the enemies of the saints do not prevail.

The Song will not only be “sung” as we cross the cusp of the new age but will provide power to sustain the peace for many years to come. Eventually millions of people will use it.

Generations from now, people will look back at our time and place and marvel that there were only a handful of people participating in helping to initiate the work of which we are a part.

“Why not seize the pleasure at once? How often is happiness destroyed by preparation, foolish preparations.”   Jane Austen (1775 – 1817)

Thank you, my friends, for your additional comments on the truisms from Book III.

Whereas all truisms are also aphorisms, not all aphorisms (a catchy statement) are truisms. A truism is a statement that has entered the public consciousness as a clever way of expressing a point that is  easily recognized as expressing some truth.

Readers keep coming up with new ones not on my original list. Not only this, but just putting attention on them again caused me to think of several new ones.

It always amazes me when a new one comes along that I didn’t think of sooner for some of the ones I have overlooked for years have been very common ones.

As an interesting side note – when Wayne and I first brainstormed on truisms I left the napkin (with them written on) in the restaurant. I was really irritated with myself and am not sure I have recovered them all to this day. We generated a bigger list than indicated in the chapter.

Rick made an interesting statement about them. He said they are so incorruptible that even a few words from a truism still paints the picture in our mind of the basic idea. He gives examples such as: A penny saved…… Birds of a feather…

Truisms will seldom be lost to civilization because only the rough idea needs to be preserved in words to keep the idea in circulation. They indeed qualify as “eternal words.”

Reader Comment: Sometimes these truisms seem to come in conflict with each other. For example:

“Look before you leap” and “He who hesitates is lost”

But there is another truism which also applies and resolves this duality: “There is a time and a place for everything”.

But, how do you know the right time and the right place?

You can’t read these truisms as being applicable to all situations and all times, but each applies to situations that we all recognize as helpful.

Let us take “Look before you leap.” vs “He who hesitates is lost.” It is true that there are occasions when there is no time to look but we must act instantly or all is lost. For instance, when a quarterback is being rushed is not the time to look and be cautious. He must often make an instant decision or all is lost.

On the other hand, when you are visited by a salesman who wants thousands of dollars of your money for vitamins that will miraculously heal you is not the time to move impulsively. This is the time to look before you leap.

The great part of these truisms is that almost all people, even average people, not that interested in philosophy, can see where they have their place in the wisdom of things.

“A venturesome minority will always be eager to get off on their own… let them take risks, for God sake, let them get lost, sun burnt, stranded, drowned, eaten by bears, buried alive under avalanches- that is the right and privilege of any free American.”  16 Idaho Law Review 407, 420 – 1980.

1 thought on “The Factor of Time”