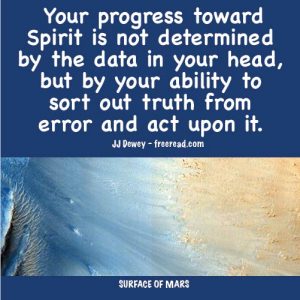 A reader expresses concern for a quote from the Essene Gospel of Peace because Jesus is quoted as the author.

We must always remember this. Just because he is quoted by writers thousands of years ago, hundreds of years ago, or even today does not mean that the words are coming from the mouth of Jesus. And even if they did come from the person of the ancient Jesus you still have to run them by your soul for even words coming from a perfect mind can be imperfect in their translation or absorption.

My intuition tells me that these are not the actual words of Jesus but someone wrote this in his name just to give added authority just as many who channel today throw in the name of some Master so recipients will be trapped by the beast of unjust authority. This is one reason I do not throw the weight of any unseen entity behind any of my words. Everything I teach could come from me or the highest God speaking through me or to me, but because it always just comes from me to you, you always have the freedom to accept or reject what I say as seems right with your own souls or personalities. There are exceptions to all things and there will be times now and again when declarations of extreme import will go forth in the name of Christ or the Hierarchy, but this will be because of either the urgency of the times or special circumstances.

There are hundreds of ancient manuscripts that are purported to be written by Jesus, Paul, Peter and others just to give them more authority.

The karma between humanity and the animal kingdom as far as food supply is concerned is mostly of a group nature. The animals who, in the beginning dined upon man, are now being eaten by man. When the great wheel is balanced then the time will come when most of humanity will be vegetarians and the “lion will eat straw like the ox” as stated by Isaiah.

When this time comes then our plants will be grown in much better soil and our food will be much more nutritious and satisfying.

If a person raises an animal for food and treats it well then the good treatment of the animal will balance off any negative karma.

Someone asks how we help animals evolve?

Not far from where I live the wild elk at the mercy of nature come close to starving to death in scarce winters. Without human assistance in supplying them with some extra food these poor animals would suffer horrible deaths.

A reader wanted me to expand on this scripture:

“Philip said, “Lord, show us the Father and that will be enough for us.” Jesus answered: “Don’t you know me, Philip, even after I have been among you such a long time? Anyone who has seen me has seen the Father. How can you say, `Show us the Father’?” John 14:8-9 NIV

This is actually a powerful scripture proving the overshadowing of Jesus indicating that there were two entities working together in one body.

For further details on this read “the Overshadowing of Christ” from the archives.

The most important verse in this scripture was left out.

“Believest thou not that I am in the Father, and the Father in me? The words that I speak unto you I speak not of myself: But THE FATHER THAT DWELLETH IN ME, HE DOTH THE WORKS.”

“My Father is greater than I.”

For further reading on the overshadowing of Jesus check out my previous articles. Here are the links: Part 1  Part 2

We’ve had several answers on this, but the answers seem to be directed at what diet is best for an individual at the moment. For instance, having some meat in my diet is a wise choice at present, but I will readily admit I am not on the optimum diet for maximum health of my body. Everything in life is a trade off. For one as busy as myself the wise eating of regularly available foods is much more convenient. Also, I find that a regular diet grounds me for what I want to accomplish at the moment.

Nevertheless, there are better diets for health than the one I am on.

Let me present to you what I consider to be the best diet for health ever presented. It was originated by Professor Arnold Ehret and called The Mucousless Diet Healing System.

His diet consists entirely of living uncooked foods with emphasis on fruit.

After reading his book a number of years ago I decided to try it out and started out on fruit only. This took tremendous discipline for one like myself who grew up on meat and potatoes. After a couple months I began to develop canker sores and concluded that I was getting too many acids and added sprouts and vegetables with emphasis on those growing above the ground. For salad dressing I used apple cider vinegar. Along with the diet I ran every day for about twenty minutes.

I ate nothing until noon at which time I ate a large salad that tasted as good as a steak. Then I finished off the day with fruit. I was on this diet for about a year and had the best vitality of my life. Unfortunately, my first wife complained daily about me not eating her food and for the sake of the marriage I went back on a regular diet. In many ways I wish I would have held my ground for it took almost a year for the diet to get comfortable and now if I go on it again I will have to start all over with the discipline.

From this experience I have concluded the optimum diet does consist in eating living uncooked foods, sprouts with a handful of raw nuts thrown it. This diet is not for anyone. If you have a history of enjoying meat as I did it will require a major decision followed by discipline. If you think you can do it, it will pay off. Actually giving up bread was the most difficult part of the diet for me.

The worst part of this diet is when you go out to eat with friends. There is often little or nothing on the menu that you can order – a good dinner salad if you are lucky.