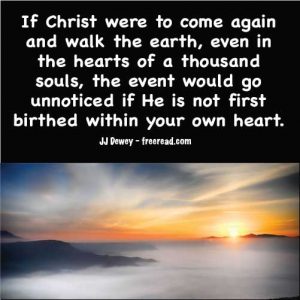 The Coming in Glory, Part 2

Another scripture that seems to deal with a glorious coming is from Matthew 24.

To illustrate this and expand on the sign of atomic energy let us go to a prediction of Jesus. In Matthew chapter 24 He was speaking of signs that would occur before He would come again.

Here is an important one the Christian world is yet waiting for:

“For as the lightning cometh out of the east, and shineth even unto the west; so shall also the coming of the Son of man be. For wheresoever the carcase is, there will the eagles be gathered together.

“Immediately after the tribulation of those days shall the sun be darkened, and the moon shall not give her light, and the stars shall fall from heaven, and the powers of the heavens shall be shaken: And then shall appear the sign of the Son of man in heaven: and then shall all the tribes of the earth mourn, and they shall see the Son of man coming in the clouds of heaven with power and great glory. And he shall send his angels with a great sound of a trumpet, Matt and they shall gather together his elect from the four winds, from one end of heaven to the other.

“Now learn a parable of the fig tree; When his branch is yet tender, and putteth forth leaves, ye know that summer [is] nigh: So likewise ye, when ye shall see all these things, know that it is near, [even] at the doors.

“Verily I say unto you, This generation shall not pass, till all these things be fulfilled.” Matt 24:27-34

Here we learn about The Sign of the Son of Man in “heaven,” that will be given before the end of the age.

What do you suppose this is and why?

What generation shall not pass away till all the things mentioned are fulfilled?

Now let’s get back to the scripture. The reason we are going over to Matthew chapter twenty-four is because it sheds additional light on the “fire from heaven.”

This chapter tells us about an anti Christ character that was prophesied by Daniel. A man of fierce countenance who would try and destroy the holy people (the Jews – who were holy to Daniel (Daniel Chapter eight).

Who was the man of fierce countenance who tried to destroy the Jews? Hitler, of course. And is it not true that if the days of Hitler were not shortened the elected Jews would have been completely destroyed just as it says in Matthew 24?

“IMMEDIATELY after the tribulation of those days shall the sun be darkened, and the moon shall not give her light, and the stars shall fall from heaven, and the powers of the heavens shall be shaken: And then shall appear the sign of the Son of man in heaven: and then shall all the tribes of the earth mourn, and they shall see the Son of man coming in the clouds of heaven with power and great glory.” Matt 24:29-30

The key to understanding this scripture is that the word heaven comes from the Greek OURANOS, the exact same word from which uranium is derived. It is also interesting that the name of the planet Uranus which rules the coming Age of Aquarius comes from the same word.

Now substitute again the word uranium for “heaven” and read the verses again. Do we now understand why this sign would make all the people of the earth “mourn?” Remember Jesus was using language of 2000 years ago to describe this future event. Nevertheless, it is amazing how accurate he was. You might want to dust off that Bible and read all of chapter 24 of Matthew. Tell us what you see now…

If it seems difficult to substitute uranium for heaven remember that this is not a black and white thing. One must use the intuition to see where the play on words were an intention of the Spirit. For instance, we wouldn’t normally pray to Our Father in Uranium (heaven) even though God is in all things including uranium.

It is not coincidence, however that the word “heaven” and “uranium” are so closely linked. Another interesting word from the same Greek origin is the planet “Uranus.” Now the interesting thing about Uranus is that it rules Aquarius and that is the new age we are passing into?

So let us look at these three phrases using heaven, uranium and Uranus, all derived from the Greek, OURANOS:

All of these are full of meaning.

Let’s clarify an important point. The sign of the Son of Man is not the actual Second Coming but a great sign that will appear as a sign that the coming of Christ is at hand.

Let me first quote a previous article illustrating the correspondence between uranium and the resurrection of Christ:

“The Christ represented the positive nucleus of the atom. His crucifixion and burial represented the fall of spiritual matter into a state where illusion and death becomes a real concern. In this state the central sun (Son) of the atom has it’s great light hidden by a veil of negative energy that becomes a tomb hiding a great reality.

Atoms evolve similar to humans in that as they progress they add seven chakras or electron layers. When the seventh becomes active the atom becomes radioactive and may even glow in the dark, as does radium. The radioactive human will also shine like the sun during certain initiations as Jesus did on the Mount of transfiguration.

Finally, when the atom and the human complete their evolution the dark tomb of matter can no longer hold them and that which seemed to be dead splits the tomb of death in two and the pure spiritual energy escapes. In the case of the atom a certain percentage is translated into pure energy or spirit and in the case of the Christ the inner life stands revealed as pure spirit and is no longer limited by physical restrictions.”

Thus we see that the splitting of uranium is a sign of the resurrection of the Son of man. It also tells us how the second beast (the U.S.) “made fire to come down out of heaven in the sight of men,” for when we substitute heaven for uranium (atomic bomb) this begins to make sense.

In this chapter (Matt 24) Jesus talks about the abominable person who causes desolation. He is quoting here from the book of Daniel and Daniel talked about this antichrist who would attempt to destroy the Holy people. To Daniel the holy people were his people, the Jews.

There is only one time in history that an antichrist attempted to completely destroy the Jews and that was in Hitler’s Germany. Now someone asked about the other tribulations and persecutions mentioned in the Book of Revelation. John’s book here concentrates more on the Christian persecutions, but in Matthew 24 Jesus is talking about the Jewish people as evidenced by the reference to Daniel.

Keeping this in mind let’s look a little deeper:

“Immediately after the tribulation of those days shall the sun be darkened (or “obscure”), and the moon shall not give her light, and the stars shall fall from heaven, and the powers of the heavens shall be shaken.” Matt 24:29

Men have been perplexed by this scripture for two thousand years and every time there has been an eclipse, or the moon is obscured, or we have a meteor shower, there are those who arise and tell us that Jesus is coming.

The key to the meaning of the verse is in the Greek word for “heaven” which is OURANOS. The element Uranium was named after this as we have said. For proof one merely has to check any good dictionary and it will trace uranium to OURANOS.

What happens when the powers of Uranium are shaken???

The atomic Bomb. This makes much more sense than the thought that the very powers of God in heaven will be shaken.

Now we can read in the verse in a totally different light;

“Immediately after the tribulation of those days (the defeat of Hitler who was destroying the Jews) shall the sun be darkened (the blast is so bright it obscures the sun), and the moon shall not give her light (a victim cannot even see the moon), and the stars shall fall from heaven (stars shall fly from uranium – it will be very sensational and bright), and the powers of heaven (uranium) shall be shaken” (how the atomic blast works).

It is interesting how almost “immediately” after the extermination of the Jews ended this great sign was given just as predicted.

Now we can understand the mystery of the next verse: “And then shall appear the sign of the Son of man in heaven (the atomic bomb was the sign that the coming of Christ is sure and fairly soon): and then shall all the tribes of the earth mourn, and they shall see the Son of man coming in the clouds of heaven with power and great glory.” Matt 24:30

Many read this verse and think that it means that people will see Jesus coming and mourn because of their sins, but notice it says “all” the tribes (Greek: races) shall mourn. Surely someone must be happy to see Jesus appear.

The sign is not Jesus at all for his appearance will bring happiness and peace to many, but the prophecy was fulfilled to the letter when the atomic blast went off in Hiroshima. All the races of the entire earth “mourned” and began to fear that the fate of Hiroshima may eventually be their own.

A more accurate description of the atomic bomb cannot be given than: “clouds of’ heaven with power and great glory.”