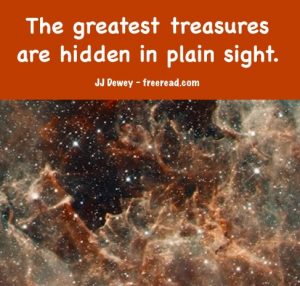 I want to emphasize the blind spot question:

“What is the “blind spot” in the physical eye and is there a corresponding blind spot in our spiritual eyes? How can we see through the blind spot?”

To understand the physical blind spot I would strongly recommend that you go to the following web page and witness the reality of this. LINK

The physical blind spot is merely a witness to a higher blind spot that obscures our vision.

Most of the major religions were started by a great teacher who in some way represented the Brotherhood of Light and Joseph Smith was no exception. If you read Joseph’s original teachings like the King Follet discourse you see light that eclipses anything in the church today.

I’ll give you another mind teaser.

Christ in the Book of Mormon was called the Father and the Son.   If he was Father Adam (the last Adam) he was the Father and in Jerusalem he was the Son. What the church does not teach is that there have been many Adams (See Moses 1:34) and the first Adam of all millions of years ago was the Ancient of Days.

Joseph illustrated that he was on the right track when fire came down on the Kirkland temple. The D&C teaches that this should happen on all temples if they are not polluted. (see D&C 94:8) Have you seen a fire come down at a recent temple dedication? Do does that mean they are polluted today?

The Church was not quite ready for the fire again at the Nauvoo temple and Joseph planned on making some changes to prepare the people but he was killed before he could set the church in order.

Contrary to church beliefs Joseph did make some mistakes. One of them was allowing himself to get killed. He received a revelation to escape to the West, but gave in to the whiners and gave himself up to the authorities.

After he died Brigham led with intelligence but he did not have the vision and since that time the church has slowly drifted into spiritual mediocrity.

Isaiah 29 really applies well to the LDS. I think you will identify with it. Read the whole chapter.

“Give ye ear and hear my voice; hearken and hear my speech. Doth the plowman plow all day to sow? Doth he not open and break the clods of his ground? When he hath made plain the face thereof, doth he not cast abroad the fitches, and scatter the cummin, and cast in the principle wheat and the appointed barley and the rye in their place? For his God doth instruct him to discretion, and doth teach him.” (verses 23-26)

Isaiah refers to the ‘“stammering” teachings in a round about way. He asks the question to a backward Israel: “Doth the plowman plow all day to sow?” In other words, Is all the farmer does is plow all day, day after day? No! Sooner or later if he has any sense at all, if when he hath made plain the face thereof” he will “cast abroad the fitches, and scatter the cummin, and cast in the principle wheat and the appointed barley and rye in their place.”

Unfortunately, Israel in these latter days does not have the sense of a simple plowman for all the churches do is plow through the same precepts over and over and over indefinitely. We forget that “precept must be added upon precept” and thus we never cast in the principle wheat and consequently never have a harvest.

The fact that we do not get beyond the plowing stage is no fault of God’s, for we are told that “His God doth instruct him to discretion, and doth teach him.” (v. 26) God has instructed us to do more than the plowing, but we have not heard.

Isaiah continues, “For the fitches are not threshed with a threshing instrument, neither is a cart wheel turned about upon the cummin; but the fitches are beaten out with a staff, and the cummin with a rod. Bread corn is bruised; because he will not ever be threshing it, nor break it with the wheel of his cart, his horsemen.” (v. 27-28)

We are told that the fitches (probably fennel) are not threshed with a threshing (Hebrew: charuts, which means a heavy sledge-like) instrument, neither is a cart wheel turned about upon the cummin. If this type of crop were harvested in this pulverizing manner, it would be destroyed; instead “the fitches are beaten out with a staff (Hebrew: matteh, which is a stick), and the cummin with a rod (Hebrew: shebet, which is a whip-like stick).

By comparison, today we do not need the same old precepts we should have mastered years ago drilled into us over and over with a sledge hammer. A light threshing of the simple doctrines is all we need so we can move on to the heavier.

Verse 28 is not a very clear translation and I would like to render it a bit plainer. “Bread corn” is undoubtedly wheat; and the word bruised comes from the Hebrew daqaq, which means to crush to powder. The word “because” is from kiy, which is more appropriately rendered “nevertheless”. Taking this into consideration, we will render the passage thus: “Wheat used for bread is ground to powder; nevertheless, he will not ever be threshing it, nor crush it with the wheel of his cart, nor grind it with his horsemen.” In other words, Isaiah here admits that wheat is threshed, broken and ground, but this process is not “stammered” or repeated over and over for it would be a waste of time and damage the grain in the process. Again, we can see the comparison with modern Mormons. They grind through the same simple doctrines over and over forgetting one of a prime teaching of Joseph Smith that “a man is saved no faster than he gains knowledge.”

You have to look at what the scriptures do not say as well as what they say. The Book of Mormon does not say that Lehi’s group was alone on the American continent.   There were many people already here and the two brothers married native dark skinned inhabitants against their father’s advice and that is why there was a skin change in one generation, not because of a supernatural curse.

As far as the priesthood goes Joseph did ordain some blacks to the Melchizedek. He had a good friend named Elijah Abel who was ordained in 1836 as well as his son and grandson.

He helped to build the Nauvoo temple and later went west to Salt Lake.

Obviously, Joseph had a different view of the black and the priesthood than did the authorities who followed him.

Actually, the priesthood cannot be given by man – only offices may be granted. The priesthood which is the “key to the knowledge of God” must be obtained through a person’s own efforts. The Priesthood order that Joseph and others before him set up is to condition men’s minds to prepare for the true power of God that comes with enlightenment.

Here is a good scripture for reflection: D&C 121

Notice these verses in particular:

“That the rights of the priesthood are inseparably connected with the powers of heaven, and that the powers of heaven cannot be controlled nor handled only upon principles of righteousness. That they may be conferred upon us, it is true; but when we undertake to cover our sins, or to gratify our pride, our vain ambition, or to exercise control or dominion or compulsion upon the souls of the children of men, in any degree of unrighteousness, behold, the heavens withdraw themselves; the Spirit of the Lord is grieved; and when it is withdrawn, Amen to the priesthood or the authority of that man.” D&C 121:36-37

The rights of the priesthood are inseparably connected with the “powers of heaven” not the powers of the General Authorities.

We may have offices “conferred” but that is a mere “call” to obtain the priesthood. We do not obtain the fullness until we are “chosen” or have chosen correctly.

Joseph’s celestial marriage doctrine has been greatly distorted. Those who came after Joseph changed many of his teachings. Notice that he had over fifty wives but the only one who was ever pregnant with his child was Eliza R. Snow, (who lost the child) and this was a mistake on his part.

He also had over fifty men sealed to him, but never had sex with them.

Joseph caught a glimpse of a divine order that was confirmed by the fire that came down on the Kirtland temple. This order is had among the Brotherhood of Light and is about to be introduced in its fullness. It is called The Molecular Relationship. The Mormons will hardly recognize it.