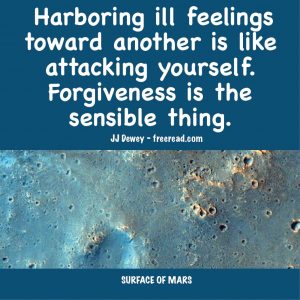 The Atonement, Salvation and Forgiveness

First let us cover the forgiveness of sins. Does this concept apply to modern people of today or was it just dreamed up by controlling old men in the past to dominate an ignorant people? Let us see how the Bible actually handles this subject by examining the real meaning of the words involved.

The word sin comes from the Greek word HAMARTANO which means “to miss the mark.” In other words, when the Greeks 2000 years ago, shot at a target with an arrow and missed they “sinned” (HAMARTANO) or missed the target.

Is this how the word “sin” is used today? Verily no. When the religious person thinks of sin in our age he generally thinks of being unclean and ridden with guilt.

Now when you shoot at a target and miss the bullseye do you feel degraded and guilty to the extent that you feel paralyzed and even feel unworthy to shoot again? No. Of course not. When you miss you may find it mildly irritating, but you generally can’t wait to have another try at it.

Now guilt has been identified with sin by those who have sought to control the souls of men, but among the enlightened prophets it was not always so. To them sin was seen as a human error and salvation from sin is the path that leads to a correction of error. The prophets in times past did not seek to control through guilt, but sought to shift consciousness from error to perfection as they saw it.

Now let us look at the second major word – “forgiveness,” for the scriptures always talk about the obtaining forgiveness of sins.

Forgiveness in the Bible is translated from the Greek APHIEMI. The trouble is that this word does not mean forgiveness as we understand the word today, even though it seems to when it is used in connection with the forgiveness of sins. But unknown to most the real meaning of the word is difficult to decipher and is translated a number of different ways. Here are some verses where the word APHIEMI is used

Mark 7:7 Howbeit in vain do they worship me, teaching for doctrines the commandments of men.

Mark 7:8 For LAYING ASIDE (APHIEMI) the commandment of God, ye hold the tradition of men, as the washing of pots and cups: and many other such like things ye do.

Matt 19:27 Then answered Peter and said unto him, Behold, we have FORSAKEN (APHIEMI) all, and followed thee; what shall we have therefore?

Matt 19:29 And every one that hath FORSAKEN (APHIEMI) houses, or brethren, or sisters, or father, or mother, or wife, or children, or lands, for my name’s sake, shall receive an hundredfold, and shall inherit everlasting life.

John 14:18 I will not LEAVE (APHIEMI) you comfortless: I will come to you.

John 14:27 Peace I LEAVE (APHIEMI) with you, my peace I give unto you: not as the world giveth, give I unto you. Let not your heart be troubled, neither let it be afraid.

John 16:28 I came forth from the Father, and am come into the world: again, I LEAVE (APHIEMI) the world, and go to the Father.

Matt 27:50 Jesus, when he had cried again with a loud voice, YIELDED UP (APHIEMI) the ghost.

Now if you substitute the modern word forgiveness in each of the above cases you will see that it just does not make consistent sense. For instance in Mark 7:8 do we forgive the commandment of God or in Matt 27:50 did Jesus forgive the ghost when he seemed to die?

If you go through the New Testament and examine all the places where APHIEMI is used you will see that the most consistent meaning of the word is “to give up, let go, yield or release.”

Now in this light let us retranslate the Biblical term “forgiveness of sins.” A much more accurate translation would be “the letting go or giving up of error.”

So how about salvation from sin? What would that mean then?

Salvation comes from the Greek SOLTERIA which literally means “to rescue or deliver.” Therefore salvation from sin is really a deliverance from error.

If one is taught the truth about guilt and its cause and release and the person accepts this teaching as correction then he is saved from sin or delivered from a great error in his thinking.

When it is said that Jesus was crucified for the sins of the world the truth is that the world made a grave error in crucifying him.

Does being saved from sin or obtaining forgiveness of sin (the giving up of error) nullify the law of cause and effect or karma? In other words, if you robbed a bank in the past would the slate be wiped clean?

No. The scriptures do not bear this out. Concerning the law Jesus said: Matt 5:18 “For verily I say unto you, Till heaven and earth pass, one jot or one tittle shall in no wise pass from the law, till all be fulfilled. (accomplished).”

The law of cause and effect is one of the laws of God and this will stay in place until heaven and earth pass away.

“For every man shall bear his own burden. Let him that is taught in the word communicate unto him that teacheth in all good things. Be not deceived; God is not mocked: for whatsoever a man soweth, that shall he also reap.” Gal 6:5-7

Here we learn that every man will bear his own burden and reaps that which he has sowed. In other words, he will suffer an effect for every cause he initiates.

The words of Jesus ring true to this principle:

“Verily I say unto thee, Thou shalt by no means come out thence, till thou hast paid the uttermost farthing.” Matt 5:26

Every cause will be counterbalanced by effects to the uttermost farthing.

Now if anyone should have had the effects of sin neutralized it would have been the severely persecuted saints in Biblical times, but of them it is written:

“And it was given unto him (the antichrist) to make war with the saints, and to overcome them: and power was given him over all kindreds, and tongues, and nations.” Rev 13:7

Here we are told that the dark powers overcame the saints and a few verses later we are given the reason for their suffering:

Even though these great souls were “saved from their sins,” or delivered from error in thinking, they still suffered the effects of their sins or mistakes.

To forgive does not mean to neutralize the law of cause and effect, but it does mean that we let go of grievances for the holding of grievance is a great error in thought as taught in the Course in Miracles.

Let us say that Jim was in a car accident that was caused by a mistake on his part and he ran into Rick, an innocent driver. Both of them were badly injured. For some time after the accident Jim was racked with tremendous guilt and cursed himself daily for making a stupid mistake. Rick also has problems for he feels a strong grievance toward Jim for the pain and suffering he has endured. Finally, Jim seeks to rectify the situation and visits Rick, explains his feelings and grief and asks for forgiveness. Rick is touched and lets the grievance pass. They hug each other and cry and both depart company feeling peace of mind again. Jim still realizes he made a dumb mistake, but decides to accept the fact that sometimes mistakes just happen. Rick realizes that Jim did not mean him harm and corrects his own thinking by letting go.

Now that forgiveness has taken place and both men are filled with peace has the actual physical effects been neutralized? Are Jim and Rick’s cars suddenly restored to their new condition? Of course not.

Are the scars they bare removed?

Are the hospital bills miraculously paid?

All the effects of every cause still remain in place. But this is a good thing because love and forgiveness are causes which produce the effects of joy and peace and thus the law of Dominating Good works through cause and effect for the long tern benefit of all.