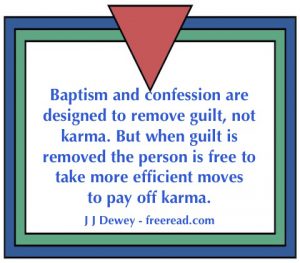 Question: Paying off karma seems very complicated. Looks like there would have to be a big book just tabulating the errors I have made. How can a complex debt be paid off?

The consequences are exactly as the scriptures says.

“He (Christ) shall reward every man according to his works.” Matt 16:27

And what does “according to our works” mean? The scripture says:

“Be not deceived; God is not mocked: for whatsoever a man soweth, that shall he also reap.” Gal 6:7

If you lie you will synchronistically encounter people in this life or the next that will lie back to you with the same intensity with which you lied. This cycle will continue until you cease to lie.

There does not have to be a large book of consequences for lies and other errors any more than you have to have a large book of instructions of steering corrections necessary to drive across town. After a couple miles driving you have corrected your course hundreds of times but writing a book of instructions concerning every correction would be silly. The corrections are built into you and happen automatically when the goal is in mind. Even so, are the causes created by lying stored in the Mind of God and returned in kind automatically without anyone having to make tabulations.

Question: It seems that punishment through karma is not productive. For instance, what good would it do me for receiving 37 lashes for lying?

The problem with this example is that it is not a consequence of kind. I do not even think they punish liars this severely in Moslem countries.

37 lashes would be overkill and an unjust punishment merely causes pent up hostility which causes greater future problems whereas a just consequence leaves the perpetrator with an inward witness that he deserved what he received and will often benefit from it.

A just consequence will indeed cure one from lying. Many of us are thick headed and have to suffer the same consequence dozens of time before we learn, but eventually we do indeed learn.

The liar is the main beneficiary of the natural consequences of his lying, but his circle of associates also benefits.

Question: Couldn’t God come up with a better system than karma to take care of our mistakes?

What better way is there than to learn from experience – to experience the effects of our own causes so that we may become a master of causes as was the Christ? We may be imperfect, but all of us are capable of paying a debt. I have written much previously about how this debt is paid off. One can pay off several lifetimes of debt in one lifetime through selfless service. Just like we can indeed perfectly pay off a bank loan despite our imperfections in earning money, even so can we perfectly pay off our karma. We can more than pay it off and start accumulating a positive balance rather than a negative.

“And every man shall receive his own reward according to his own labour.” I Cor 3:8

Many say that Jesus came along and suffered for our sins and this created an atonement which removes cause or karma.

Cause cannot be removed by anyone – not even God for to remove cause is to remove all creation as it says in this scripture concerning the idea that duality could be suspended:

“…there could have been no creation of things, neither to act nor to be acted upon; wherefore, all things must have vanished away.” II Nephi 2:13

“Thou shalt by no means come out thence, till thou hast paid the uttermost farthing.” Mat 5:26

But, you say, Jesus paid the uttermost farthing for us and fulfilled the law with an infinite atonement.

But did he? Is that what the scriptures really say???

Here is a scripture relating to the fate of those who did receive the atonement of Jesus:

Rev 13:7 And it was given unto him to make war with the saints, and to overcome them: and power was given him over all kindreds, and tongues, and nations.

Rev 13:8 And all that dwell upon the earth shall worship him, whose names are not written in the book of life of the Lamb slain from the foundation of the world.

Here we are told that power is given to the Beast to make war with the saints and overcome them. We saw that this was true in the time of Christ. If anyone received an atonement it would have been the twelve apostles, yet all but John were killed with the sword or other means. Thousands of others suffered brutal painful deaths.

Why did they suffer so?

The scripture plainly tells us that there is a reason they must have patience and faith. It explains here that the beast has such power over them because of this principle:

Now keep in mind that this is a New testament scripture given after the Atonement had been made.

It gives no exception to the rule, but makes a point blank statement.

Those who were the early Christian Saints being put to death by the Beast, which was Rome, were given into his power because in past lives they themselves were the perpetrators of atrocities. In the past these saints had put others in prison and to death with the sword and were in that life suffering the consequences of their action and therefore had to have patience and faith in their sufferings.

The LDS here revere Joseph Smith as a man who was righteous and received an atonement, yet he was tarred and feathered, kidnapped, placed in jail and finally killed all as a result of cause and effect. Why did not the atonement protect him from this karma which many say should not exist?

If the atonement does not remove karma, which is cause and effect, then what does it do?

The atonement removes guilt and guilt often has more to do with imagined causes rather than real causes.

One always feels guilt when he violates the commandments of his religion no matter what they may be. Judaism was a religion with a great number of laws, most of them manmade and there probably was not a Jew in the days of Jesus who did not suffer some guilt for some violation of what he perceived to be God’s will.

If you feel that God has commanded you to not eat peas and you break His will and eat peas then you will feel guilt. Even though the peas cause no real harm you still need the guilt removed. But then if a savior comes along and reveals to you that your guilt is produced by illusion and reveals the truth, the guilt magically disappears. This is how the magic of the atonement works.

It is best expressed in these words of Jesus:

“You shall know the truth and the truth shall make you free.”

The true atonement is a revelation of the truth so illusion passes away and guilt is lifted. Then real progress can be made.