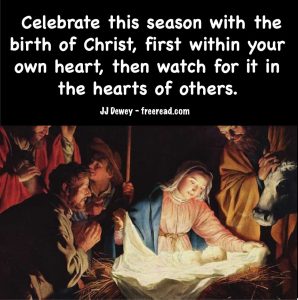 The Birth of Christ

The Birth of Jesus

THE time was nearly due for Jesus to be born, and Mary longed to see Elizabeth, and she and Joseph turned their faces toward the Judean hills.

2 And when upon their way they came to Bethlehem the day was done, and they must tarry for the night.

3 But Bethlehem was thronged with people going to Jerusalem; the inns and homes were filled with guests, and Joseph and his wife could find no place to rest but in a cave where animals were kept; and there they slept.

4 At midnight came a cry, a child is born in yonder cave among the Beasts. And lo, the promised son of man was born.

5 And strangers took the little one and wrapped him in the dainty robes that Mary had prepared and laid him in a trough from which the Beasts of burden fed.

6 Three persons clad in snowwhite robes came in and stood before the child and said,

7 All strength, all wisdom and all love be your, Immanuel.

8 Now, on the hills of Bethehem were many flocks of sheep with shepherds guarding them.

9 The shepherds were devout, were men of prayer, and they were waiting for a strong deliverer to come.

10 And when the child of promise came, a man in snow-white robe appeared to them, and they fell back in fear. The man stood forth and said,

11 Fear not! behold I bring you joyful news. At midnight in a cave in Bethehem was born the prophet and the king that you have long been waiting for.

12 And then the shepherds all were glad; they felt that all the hills were filled with messengers of light, who said,

13 All glory be to God on high; peace, peace on earth, goodwill to men.

14 And then the shepherds came with haste to Bethlehem and to the cave, that they might see and honour him whom men had called Immanuel.

On December 25th we celebrate the birth of Christ. While it is true that he was not born on this day it is true that this has been a sacred season for the celebration of world saviors for many thousands of years.

If Christ were present writing to us, here are the words I believe he would speak.

My Friends, I call you friends, because you seek my voice and recognize my words carried by the Spirit into your hearts. When you sense words of light and embrace them within to kindle the fires of Spirit in your heart and feel the fire that burns but never consumed – you know at that time that it is I, even I that am with you, and you are with me in the bosom of the Father/Mother God.

Any day that you seek to kindle the birth of Christ within your heart is a sacred day and honored by me and all the saviors which have gone on before me for I am in them and you are to be in Me in thought and deed for I hold your presence in the palm of my hand and embrace all within my heart who seek the inner flame of soul.

“Peace on earth goodwill to all,” are still the words on the lips of angels. Let it also be on your lips, my friends, and let it spread as the fire of a candle lighting other candles until all the hearts of humankind feel the presence of the most holy peace within, transforming the world to peace without. When you feel peace within and see peace without you will feel Me within and My presence in form will no longer be hidden from your eyes.

Comment: Trying to prove truth through the use of words is a dead end street. One must experience truth.

On the other hand, without semantics we wouldn’t even be here talking on the internet and the loss would be the sharing of truth.

Truth is simple. It is what is. When we experience what is then we know the truth whether it be 2+2=4 or the Light and Love of God Itself.

A critic seems concerned that we (or more particularly me) are using mind control tactics here in this group. He states that what I call soul contact is similar to mind control techniques the military uses.

First let me state that I think that it takes an over active imagination to come up with such a comparison.

For one thing I am sure that the military is not experimenting with using mind control solely by posting teachings on the internet. It would be difficult to control anyone by such methods. Any experiments they use involve some type of in person contact and to suggest that the military uses “soul contact” as I have taught it as a means of control is an amazing thought.

However, it is true that groups with ideologies do project a cohesive energy, but this is far removed from soul contact as I have taught it. I have stated a number of times that the standard astral group energy can be mistaken for soul energy but is far removed from it.

Let me herewith issue this challenge after teaching here over the years. Where is there even one statement I have made or even one person as an accuser that can name one time that I have sought to influence the souls of men and women contrary to their free will?

As far as my handicap creating some hole allowing negative forces to control me – this idea is an outrageous insult to all who have sustained an injury. My accident that I referred to earlier involved a homemade rocket blowing up in my left hand when I was a teenager. My shoulders lungs and heart are fine.

According to your theory Franklin D. Roosevelt would have been subject to control of dark forces since he had a handicap and Hitler would have had the advantage on the side of light.

I let nothing control me but my own soul and recommend the same path for all people. Of course, none will know this is true if I merely proclaim it, but such truth can be had by all who find true soul contact for one who reaches the soul can recognize another who has.

I end with a quote from Djwhal Khul on accidents:

“When through application to meditation, and power and activity in service, a man has developed his vehicles to a point of real achievement, then his vibrations set in motion matters of a specific kind, and he learns to work with that matter, to manipulate the fluids, and to control the builders. In so doing he encroaches on the domain of those who work with the forces of involution and thus he may bring attack upon himself. This attack may be directed against any of his three vehicles and may be of different kinds. Let me briefly point out some of the methods employed against a disciple which are the ones which alone concern the student of these letters:

“{A} Definite attack on the physical body. All kinds of means are employed to hinder the usefulness of the disciple through disease or the crippling of his physical body. Not all accidents are the result of karma, for the disciple has usually surmounted a good deal of that type of karma and is thus comparatively free from that source of hindrance in active work.”