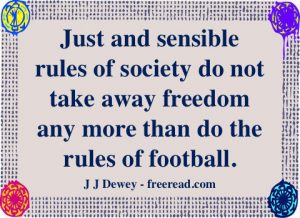 Rules of the Game

Name three Laws of Order which will assist mankind in creating the New Age of Peace. Tell us why you believe this.

Got some good answers related to love and service but what I am talking about is the more black and white rules of law that we all seem to hate so much including myself.

While it is true that there are many rules that we could live without, there are also some that are needed to maintain order, even in a fairly enlightened society.

Someone mentioned laws of speeding, seat belts and taxes as laws many of us break. Yes, it is true we have way too many laws, but as we discussed in the pendulum principle both extremes always bring disaster. Too many laws bring the disaster of suffocation and not enough bring disorder, along with the weak being subjugated by the strong.

For some reason we are good at making useful rules in the playing of sports and terrible when it comes to rules established by government and bureaucracy.

Let us suppose that rules were made to govern football similar to the intelligence behind the rules set by lawmakers.

The field is 100 yards long

A 100 yard field is the ideal providing all who are playing are perfect physical specimens. If any players are handicapped then the field can be as small as 70 yards. If minorities are added in the field can be reduced another 10 yards.

If the losing team in a 100 yard field can show evidence they would have won in a smaller field they can contest the win and possibly overturn it. Each football team will have lawyers and committee representatives to assist in determining that the field size was fair to all players.

For some people it is easier to catch a round ball therefore a player can contest the shape and size of the ball and call for a change. If the ball is too heavy for smaller players then smaller footballs must be available for play.

The winner of the game is the team that scores the most points and there are certain plays that score certain points.

There are many important ingredients in the game besides scoring points. A first down is important and should be worth one point. Any pass over 20 yards should also score a point.

In addition to this, there are always players who do not score points in the normal method so each game shall have a committee appointed to judge the effort of the less talented players and give them points on the struggles they made.

If a team loses three or more games in a row damage could be incurred to self esteem so any team that loses three games will play their fourth game with a starting score of 14 points. If a team loses four times in a row there has to be some type of celebration established to praise the good points of the loosing players so they too can feel good about winning in their own way.

We could go on here but these examples should make the lesson clear. Too many rules made by those who do not understand the game suffocate and destroy the excitement and enjoyment thereof.

On the other hand, with no rules there would be no game, no stability and no enjoyment.

But there is a middle way of having just the right number of rules so the game can have excitement, order and involvement.

Do we ever hear a player complain that the rules governing a successful pass completion takes away his free agency because they never had a hand in agreeing to the making of such a rule? No. We would think such a one as being crazy indeed?

Yet there are many on the fringe who believe that the necessary rules of society take away their freedom or free agency.

The truth is that just rules of society do not take away freedom any more than do the rules of football. If we want to play any game at all we must abide by many rules that we never had a hand in making.

Even so in society if we want to live in civilization we must also live by rules that we never had a hand in making.

Even though moral laws can be written in our hearts this does not apply to rules of order such as we have successfully implemented in sports.

You’ll never have two ball teams get together with no pre-established rules and play by rules of the heart. All would be chaos in five minutes and both sides would quit in disgust and go home.

We have heard it said that life is a game and indeed it is in many ways. If life indeed corresponds to a game then it becomes obvious that just the right number of firm rules will enhance life and make it more playable, fun and workable for us all.

If life is a game then too many rules will frustrate us and discourage us from playing.

If life is a game then no rules destroy the game so there is not even an incentive to play.

Even this group which has had few rules is approaching a time when added rules may be necessary to insure its stability and enjoyment for all.

Now let me give one law of order which will be necessary to insure a new age of peace.

There will be an international law which will prohibit weapons of mass destruction which have the capability of destroying all or most of the life on earth.

This law is essential to guarantee that we can even continue to play the game of life.

Can you think of two other laws that will be essential to insure a new age of peace?