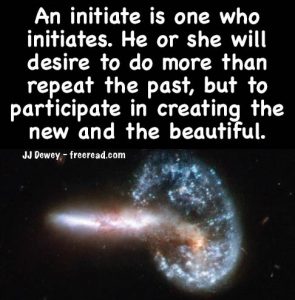 Let us apply the Law of Economy to how a Master or a true teacher will use repetition to present ideas or principles.

I said that the masters do not like to repeat themselves in their revelations to humanity.

The idea is that if we already have a book on White Magic as given by DK it would be wasted energy to give out the same information under a new title through another disciple.

The Law of Economy does not mean that repetition will not be used.

Keep in mind that some of DK’s teachings are repeated word for word in his books and the various phrases of the Sermon on the Mount were not original with Jesus but had been given out before through various teachers.

First Part: You have heard me say many times that the Masters do not like to repeat themselves. What does this have to do with the law of economy? Does then the Law of Economy tell us that the repetition of a past revelation is probably not a true revelation from the Hierarchy?

Second Part: When does repetition harmonize with the Law of Economy?

Again we see that we must go to the second key of Judgment to correctly understand how this law applies. There are times when repetition is good and times when it is a waste, or a “vain repetition.” Judgment must be used to determine which is which.

I have said that the Masters do not like to repeat themselves to us. In other words, they use repetition in harmony with the Law of Economy. They will repeat themselves when necessary but when a complete revelation is given out in written form it would be a waste of energy to give it out to a second person saying approximately the same thing. Instead, they would be following the Law of Economy by telling the disciple where to look for that which is already revealed and in book form.

On the other hand, there are many things written in books that a Master Teacher may quote and give further elaboration. In doing this he is repeating an essential teaching, but also giving out something new in relation to it. This fits in with the law of Economy.

The ingredients of the Sermon on the Mount were all given out before Jesus taught them, but his was a new arrangement with a new emphasis. There was no manuscript he could just point to and tell his disciples to read.

DK repeats certain key teachings in his books that he felt were important to emphasize.

On the other hand, repetitions that do not follow the Law of Economy that claim to be inspired or new revelation are usually not inspired and not revelation.

There are many out there who claim to be channeling some master who produce teachings that are already found in Alice A. Bailey and other books. If these repetitions were from a true master he would merely tell the medium to go to a certain book and read it rather than vainly repeat that which has already been given out.

Question: Do we have to understand the Law of Economy before we can master the Law of Love? Why?

Answer:Yes. The law of economy governs the scattering of form and vibration whereas the law of Love governs the attraction of forms that brings all things together.

Before we can understand love which brings things together we must understand what pulls things apart and what governs the forms the separate particles take.

Jesus hinted at the Law of Economy when he said:

“Consider the lilies of the field, how they grow; they toil not, neither do they spin: And yet I say unto you, That even Solomon in all his glory was not arrayed like one of these.” Matt 6:28-29

It wasn’t until the microscope was invented that we could truly understand the words of Jesus. When we magnify the lilies or other living things we see a world of unimaginable order and glory, all created by Divine Intelligence following the Law of Economy, which creation paves the way for the understanding of the Love of God.

“A man is governed by the Law of Attraction (Love), is evolved through the Law of Economy, and is coming under the Law of Synthesis.” Treatise on Cosmic Fire, Page 249

In other words, he tells us that we owe our evolution to the Law of Economy.

Question: What does the Law of Economy have to do with our evolution? How can we quicken our evolution when we understand it?

What does this law have to do with time? Do we have all the time in the world or is it important that we make effective use of it?

Reader Comment: I don’t understand what separation and the line of least resistance has to do with repetition.

For instance the Law of Economy has caused the various particles to fall in place in an efficient manner to create the atom. The separation principle causes the electrons to be separate from the nucleus.

Even though we have this separation in the atom we have a lot of repetition which follows the Law of Economy. Each electron circles the nucleus over and over for millions of years following the line of least resistance and the most efficient paths.

Inside the atom the particles spin with great repetition also following the Law of Economy. In addition the atom itself spins and wobbles repetitively.

Efficient repetition is indeed governed by this law.

Let us repeat a quote from DK:

“A man is governed by the Law of Attraction (Love), is evolved through the Law of Economy, and is coming under the Law of Synthesis.” Treatise on Cosmic Fire, Page 249

In other words, he tells us that we owe our evolution to the Law of Economy.

Question: What does the Law of Economy have to do with our evolution? How can we quicken our evolution when we understand it?

What does this law have to do with time? Do we have all the time in the world or is it important that we make effective use of it?

The point is that when we evolve we move from one point to another upon the path. And what happens to our movement when we cease moving efficiently?

What happens is that we take a detour that takes us off the path, thus becoming inefficient in our progress and not following the Law of Economy.

For instance, one of the ingredients of swift economical progression is to develop a loving and forgiving nature. But let us say that you meet someone you just cannot stand. On top of this he causes you a financial disaster and you lose almost everything you own. Suddenly a switch goes off inside and you say to hell with the loving nature and you hold a grievance and begin to take a perverse pleasure in hating the guy and would do him harm if you could.

This problem puts a hold on the development of your loving nature as well as many other ingredients of your progression.

You are no longer following the Law of Economy for you are not moving efficiently along the path. You have taken a detour and are lost for a time.

Thus we see that the choices that best move us forward along the path are those that take us from point A to point B with the minimal waste of time strongly linking this law with time. The understanding of this law will be a great aid to us in making the right decisions in life. The best decision is usually that which will move ahead our spiritual progression with the most speed and economy.

The drawback of the belief in reincarnation is that many who superficially understand it think we have all the time in the world and take their time in their progression.

When the Law of Economy is understood this will no longer be the attitude. Each cycle governing our progression only has so much time in it. If we want to move ahead with our friends and fellow students we must practice this Law of Economy and not waste time or else we will be left behind for many ages.

There are four subsidiary laws to the Law of Economy which are:

“(1) The Law of Vibration, dealing with the key note or measure of the matter of each plane. By knowledge of this law the material of any plane in its seven divisions can be controlled.

(2) The Law of Adaptation, is the law governing the rotary movement of any atom on every plane and subplane.

(3) The Law of Repulsion, governs that relationship between atoms, which results in their non-attachment and in their complete freedom from each other; it also keeps them rotating at fixed points from the globe or sphere of opposite polarity.

(4) The Law of Friction, governs the heat aspect of any atom, the radiation of an atom, and the effect of that radiation on any other atom.” Treatise on Cosmic Fire, Page 219

We shall first talk about the Law of Vibration. Here are a couple things DK said about it.

“A gradual grasp of the law of vibration as an aspect of the basic law of building, the law of attraction, is brought about, and the initiate learns consciously to build, to manipulate thought matter for the perfecting of the plans of the Logos, to work in mental essence, and to apply the law on mental levels, and thereby affect the physical plane. Motion originates cosmically on cosmic levels, and in the microcosm the same will be seen. There is an occult hint here that, pondered on, will reveal much. At initiation, at the moment of the application of the Rod, the initiate consciously realises the meaning of the Law of Attraction in form building, and in the synthesis of the three fires. Upon his ability to retain that realisation, and himself to apply the law, will depend his power to progress.” Initiation, Human and Solar, Page 140

Question: What does the law of vibration have to do with creation, or form building?

“Later, when the knowledge of occult healing is more familiar, and the laws which govern the subtle bodies are more known, physical plane science will be superseded by the preventive science of the subtler planes, that science which aims at the provision of right conditions and the building of bodies that are both self-protecting and neutral to all attack. It will he found that the comprehension of the law of vibration, and the effect of one vibration upon another vibration holds the key to the establishing of better conditions of living, and of sound bodies on all planes.” Letters on Occult Meditation, Page 242

What does the Law of Vibration have to do with healing and health?

For my birthday I got a humidifier and a de-humidifier…I put them in the same room and let them fight it out. Steven Wright