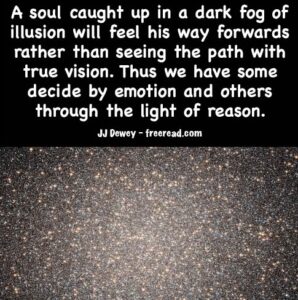 Question: As the people in the churches begin to think for themselves and use logic and reasoning which teachings will they reject?

Which ones will they continue to embrace?

Here are some beliefs put forward that some thought would be abandoned.

(1) The idea of dying and ending up in a place of torment and fire for eternity.

(2) The idea that your religion/belief system is the only right one and everyone else will be condemned to hell.

(3) The idea that the Bible is the pure, unadulterated Word of God and should be read and believed literally.

(4) The idea that there are no truths in other religions and their holy books.

(5) People will come around to accepting reincarnation

(6) People will embrace the teachings on love in every religion and thus lay the foundation for right human relations.

JJ: This black and white literal interpretation of the scriptures that was mentioned is particularly harmful. It is as DK teaches that evil is a distortion of a divine idea or a thing that we would normally call good.

The scriptures of the world have divine ideas and are seen as good writings, but a misapplication of them can be the cause of much evil. In fact, this is the cause of perhaps the greatest evil we face in this age, which is terrorism. Most of these terrorists sincerely study their scriptures and take admonitions that were meant for another age and strictly apply them to our time. This just does not work. “The letter killeth, but the spirit giveth life” is one scripture that perhaps we ought to take literally.

A too literal interpretation not only leads to harmful actions, but also to illusionary thought that must be dispelled. Here are a few.

Ancient man believed that the earth was the center of the universe and even the sun circles around it. This illusion has not been completely dispelled, for many still believe this to an extent. Many religious people believe that earth is the only planet with life.

Most Christians believe that Jesus is the Savior of the whole universe. Logic will eventually sway religious thinking toward the idea that many worlds are inhabited and others with human life have messiahs of their own.

Many religious as well as new age people believe the earth is the most important planet in the galaxy or universe. Reason will eventually lead them to conclude that our planet is no more important in the galaxy than we as individuals are in relation to the whole earth.

The idea that the earth or the Universe is 6-10,000 years old will be dropped and replaced with the best scientific estimates.

Being too judgmental in a negative sense will be replaced with right human relations governed by empathy.

The idea that we turn all things over to God will be replaced with a greater sense of self responsibility will at the same time reaching a higher spiritual contact.

Judging evil because words used are not spiritually or politically correct will be replaced with judging good or evil by whether it really produces good or harm.

Readers  pointed out that not only is the Bible interpreted incorrectly in many cases but it also has some text  that isa  not literally true.

Overall, I look for truth rather than the error. This does not mean that the error is not there for the Bible was not written by the finger of God, but by human beings with flaws like you and I.

Some of the teachings in the Bible represented the morality of a past age, but not today. For instance, after a victory the Israelites of the Old Testament were told by God to kill all the men and take the women as slaves. If a child misbehaved the parent was allowed to put him to death. If a citizen was found working on the Sabbath he was to be put to death.

We have moved beyond these draconian methods, yet many believe that they were given by the voice of a perfect God.

In the New Testament Paul stated that women were not to speak in meetings, and to keep their heads covered.

Thinking people today (even Christians) see no reason to follow this injunction.

When reading the Bible it becomes obvious that the disciples were a lot like many believers are today in that they believed the end of the world was just around the corner.

Paul said: “The appointed time has grown very short; from now on, let those who have wives live as though they had none.” I Cor 7:29

Paul seemed to think the end was near and thought it best that no one have children. This is not something we want to take literally today.

Paul further illustrates that he expected the end within his lifetime: “We who are alive, who are left until the coming of the Lord…” I Thess 4:15

Peter said, “The end of all things is at hand.” I Peter 4:7 and even the inspired Book of Revelations says that it reveals events which “must soon take place.” Rev 1:1 2000 years later most of the events have still not come to pass on a literal basis.

If we realize that those disciples were like people today then these mistakes can be understood. No one wants to predict the glorious new age as being 2000 years away, but we want to see our salvation as just around the corner. Who among us is making predictions about the year 4000? Virtually, no one. Even so, the disciples in Jesus’ day were hoping for a glorious return in the near future.

A reader makes a good point about the virtues of the Bible despite its flaws:

“But none of this takes away from the true principles which are taught in the Bible, and which can be found by beginning and advanced disciples, alike. And if we are reading for the Bible searching for truths instead of searching for mistakes, we will find the truths. The roses amongst the thorns, as it were.”

Another reader advises: “If you wish to debate a Christian, never, ever, claim the bible contains any error.”

JJ: This is good advice and I’m sure you meant it to be taken or left as the reader sees fit.

I have indeed found through experience that when you tell a believer that his very foundation is wrong that he will become very defensive. Yes, it is good to see the scriptures through his eyes and work with what he has. I have also found that just teaching truth, without offering criticism of the seeker’s belief system, is attractive to many and eventually something will come to them that will transform them.

You can debate a believer on his own turf even if you know nothing of the Bible or whatever it is he is studying. Just have him read some of his favorite teachings and use your common sense to put new light upon them. Your viewpoint may open his eyes to something new.

I realize, of course, that you have to teach a lot of people before even one will make an effort to see a new light.

Question: Has someone ever spoken or taught just the right thing to you that made you wake up to a higher truth? Tell us about it.

Has there ever been a time that you said just the right thing to turn someone else’s life around or bring them to a higher vision?

“It is the mark of an educated mind to be able to entertain a thought without accepting it.” Aristotle (384 BC – 322 BC)