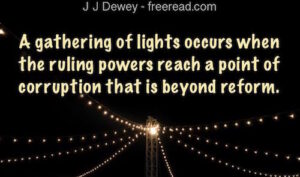 The City on the Sea

A reader made some comments about a future city on the sea, which is among my predictions, stating that it looks like it would come under UN jurisdiction because of new regulations proposed.

From my reading of the UN site it sounds like their control would be strongest over the resources of the sea itself rather than commerce upon the them.

Problems with the powers-that-be have been anticipated and there will be a way around them. There will be a great chess game played out between light and dark forces.

Earlier was mentioned the hazards of gathering upon the sea. Actually, there are potential hazards anywhere the lights will gather, but several things will minimize them.

The cities will be moveable so they can move out of the way of dangerous storms.

Secondly, bad weather is stimulated by stormy astral emotions and if we truly gather the lights the weather will be better than normal in the gathering places. This is one reason the scripture says that in the last days only the righteous will be safe upon the waters.

Thirdly, a city upon the sea would be out of reach of many who would oppose us giving a breathing space to prepare for larger problems.

Question: When a city has really bad stormy weather is that because the astral emotions of most people in the city are also stormy, and is this cyclic also?

JJ: Just as good health and ill health have several influences causing them so does the weather.

(1) The standard ones recognized by scientists. A few of them are:

(b) The make-up of the atmosphere

(c) The temperature and evaporation rate of the earths oceans and waters.

(e) Volcanic activity in the oceans and the land.

(2) The second main reason is not recognized by standard science which is: The influence of human thought and emotion. Human energy is, at present, not the prime cause of weather, but it is an influence and this influence is much larger than most spiritual students realize. When humanity realizes their influence and the powers they have then damage from storms will come under much greater control of the human race and damage from such will be minimized.

The effect of human thought and emotion is often externalized through symbols manifested in our physical reality. Let us look at a few. Consider a few climate anomalies. Most prominent at this time (Feb 2005) are the floods and record precipitation in the Hollywood/Los Angeles area. What does the symbolism teach us in this instance?

Water represents emotion and an overwhelming amount of water tells us that this area has been experiencing a flood of emotion.

Now the question is this: Is it positive or negative emotion? To determine this let us look at the effects. The effects are negative for many people are losing their homes and everything that is dear to them. Even those who have not lost their homes are downcast and depressed and are worrying about the future.

What has happened in the Hollywood/Los Angeles area that corresponds to this?

Answer: the Hollywood/Los Angeles area was extremely anti Bush and most there really felt that Kerry would win the election. When Bush won, the vast majority in that area felt very downcast and experienced very negative and overwhelming emotions. Some even went for therapy over their feelings. Just like many who experienced irreparable damage to their homes those who felt overwhelming emotion over the election of Bush felt like they lost everything and were very worried about their future.

Now let us look at other areas where we have had large amounts of moisture since the election. From Canada came record snowstorms that covered Illinois, Pennsylvania, New York and the Northeast. Hardest hit was Massachusetts. What’s significant about these states and Canada? They are all blue states that voted for Kerry and Canada has been very chilly toward Bush. What’s extra significant about Massachusetts? It’s Kerry’s home state, often seen as the most Democratic state in the country.

Interestingly, what is the most Republican state in the Country?

Idaho. And the interesting thing is we have the opposite problem and have had a record lack of snow. It’s been like spring and summer all year long here.

What then is the symbology behind record snowfalls in the blue states? Since snow is composed of water it is much the same as the problem in Los Angeles. The fact that it materialized as snow adds a chill factor to their emotional feelings about Bush. The folks in the Northeast are experiencing more of an emotional chill than depression over the Republican victory. That said, when the situation is reversed in the future look for the red states to suffer bad weather associated with their feelings.

What other part of the world suffered depression over water? The most famous in years was the recent Tsunami caused by an earthquake in Indonesia.

The earthquake came first. What does this symbolize?

An earthquake tears apart the very foundation under our feet. This symbolizes that people are too set in their ways and need to have their foundations shattered and replaced. In this case the earthquake was followed by an overwhelming wave of destruction and death.

The great wave shows that the people have strong emotional feelings against change and when it comes it seems as bad as death.

Now most of the people effected were Muslims very set in their ways. Many in that area see any change in their way of living or civilization as shattering the foundation upon which they stand and would rather die than to face the resulting changes.

Who else has had earthquakes lately?

Iran has had two of powerful ones within a few months. The leaders there have been very resistant to changes, but many young people have been hoping for change and even hoping the United States would intervene. Consequently, nature intervened and has shaken the foundation of that country, especially when western nations came in to offer disaster aid.

Question: Do you see such a city happening in say, our (as in all of us here on the keys) lifetime?

JJ: The gathering with intent to build cities should be underway within 25 years, but hopefully sooner. Many alive now will be reborn at a future time to see the full benefits of the Gathering.

Question: Will there be an ice-age because of the astral emotions of humanity?

JJ: An ice age is mostly due to cycles within the earth, but the timing of its beginning is influenced by human thought and emotion. There will be some unusual changes and earth events over the next few decades but the big earth changes are over 100 years in the future.

Question: Destructive weather we have not discussed has been hurricanes. What does the symbolism behind these reveal? What does it mean that some areas get them periodically and others do not?

We received interesting comments on this. I should have also mentioned tornadoes for I’m sure they fall in a similar category esoterically.

First, someone (I don’t recall who) stated that there were storms before humans were on the earth as an indication that humans are not the cause. This may be true and, of course, there are storms on all planets with an atmosphere whether they have intelligent life or not.

This, however, does not contradict anything I have said on the subject. I never said that humans were the single cause of storms, but listed accepted scientific causes at the beginning of this subject. Instead of humans being the cause they are instead a powerful influence, which influences the timing, location and potency of storms.

For instance, if Kerry would have won the election it is quite possible that instead of record precipitation in the Los Angeles area and clear skies in Republican Idaho the situation would have been reversed.

Incidentally, it looks as if the blue states have not transcended their cloudy attitude for the northeastern states are being hit again with record snowstorms.

Overall though hurricanes and tornadoes seem to strike the red states more than the blue states. What is interesting is the type of red states that suffer. They seem to fall into two categories.

What do these two have in common? Basically they are both resistant to change and new ways of thinking.

Reader Comment: As far as hurricanes go-doesn’t air represent mind and thought? If that’s true then I would have to conclude something is happening in the mind of a population which is causing hurricane formation and/or attraction.

JJ: The hurricane would indeed be largely connected with the mind as air is its symbol. Hurricanes are attracted to areas where thinking and mental flexibility has stagnated. The hurricane comes in and forces change with a vengeance.

As most know, the eye of the hurricane is an extremely peaceful center. This tells us that in the midst of turbulence and change that we too can be at peace if we stand in the center of our being, move with the energy and accept the inevitable.

There is one more influence on the weather on this and other planets and that is the fact that planets themselves are living entities and storms are an expression of their emotional nature.

“To repeat what others have said, requires education; to challenge it, requires brains.” Mary Pettibone Poole