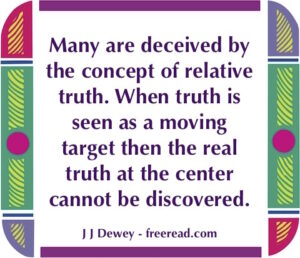 A reader expressed the belief that we shouldn’t even try to improve the world as this would merely be investing in polarities.

Here is what it sounds like is the essence of this philosophy: The world has gone to hell in a handbasket and is in a deep matrix of illusion, trapped in duality, controlled by the Beast to the extent that the only thing to do is to have nothing to do with it, throw your hands up, give up, and not even help others in a “humanitarian” way. What is there to do then? Either kill yourself or go to a mountaintop and OMMM all day and maybe starve to death in the process.

He continues as follows: “The greatest changes in the world have been won by those who were NOT So-called realistic. They were inherent revolutionaries. Someone who is spiritual in fact is a born revolutionary. He sees that this world is NOT our world and man must change not only his view but must also learn the Truth. And when he Knows the Truth and thus Lives the Truth, he will come back to share the Truth. This is what all the great Avatars, Masters and great spiritual guides did. Nobody was talking about maintaining this world and talking to be realistic.”

JJ: I think you have it backwards. Those who revolutionize the world in a good way, and are the teachers of the race and are the realistic ones.

Who was realistic? Those who taught the world was flat or those who saw it as a globe?

Columbus and Copernicus thought the world was round because they faced the realism of true facts and principles.

Who was realistic? Abraham Lincoln who saw slavery as an evil or the masters in the South who thought their own freedom was dependent on the slavery of another.

The Founding Fathers of the U.S. who thought that they could obtain greater happiness and prosperity in freedom or King George who thought they would do better being controlled by the mother country?

Realism brings the seeker closer to the truth and spirit, not the other way around. The trouble is that those in illusion think they are being realistic when they are merely being opinionated. The true realist looks beyond his bias.

The reader continues: “But as long as the corporations are fed and dominated by money and economic laws, and profit is the main goal, all good humanitarian intentions will be compromised heavily. That’s why indeed there still is a high unbalance in food in the world, despite the high wealth in the western world and despite the fact that there is enough for all species of humanity.”

Which one has the greater number of poor?

The poorest in the United States would be considered rich in North Korea where the average citizen is now living on tree bark.

In fact without the help of capitalistic U.S. dollars sent to Cuba by friends they would be living on tree bark there rather than a luxurious bowl of crumbs each day.

Anyone who succeeds and does any good in the world has a profit motive of some kind, even the Brotherhood of Light, even God.

Do you think God made this world with no profit in mind?

Of course not. He made it with the idea that He was going to get a benefit from it and its inhabitants.

The Brotherhood of Light serve with the idea that humanity will profit and in turn they will profit by being lifted up higher by those greater than themselves.

Is it evil to have money as a motive? To answer this we must ask what money is.

A unit of money represents a unit of labor or service. To say money is evil is to say the service of laboring for others is evil.

Both labor and money are only evil if they are directed toward a destructive end. Otherwise, they can be good and constructive.

The truth is that Capitalisms has worked well as long as there is freedom, but will eventually be replaced by a more cooperative system. Trying to accomplish this by force will take us backwards, but allowing social evolution to proceed in an atmosphere of freedom will produce the best results in the end.

Here’s an interesting discovery from the Drudge Report.

Workers repairing a sewage pipe in the old city of Jerusalem have discovered the biblical Pool of Siloam, a freshwater reservoir that was a major gathering place for ancient Jews making religious pilgrimages to the city and the reputed site where Jesus cured a man blind from birth, the LOS ANGELES TIMES reports.

The pool was fed by the now famous Hezekiah’s Tunnel and is “a much grander affair” than archeologists previously believed, with three tiers of stone stairs allowing easy access to the water, according to Hershel Shanks, editor of Biblical Archeology Review, which reported the find Monday.

Scholars have said that there wasn’t a Pool of Siloam and that John was using a religious conceit’’ to illustrate a point, said New Testament scholar James H. Charlesworth of the Princeton Theological Seminary. “Now we have found the Pool of Siloam … exactly where John said it was.”

A gospel that was thought to be pure theology is now shown to be grounded in history,’’ he said. The discovery puts a new spotlight on what is called the pilgrimage to Jerusalem, a trip that religious law required ancient Jews to make at least once a year, said archeologist Ronny Reich of the University of Haifa, who excavated the pool.

Jesus was just another pilgrim coming to Jerusalem,’’ he said. “It would be natural to find him there.” The newly discovered pool is less than 200 yards from another Pool of Siloam, this one a reconstruction built between A.D. 400 and 460 by the empress Eudocia of Byzantium, who oversaw the rebuilding of several Biblical sites.

Life can only be understood backwards; but it must be lived forwards. Soren Kierkegaard (1813 – 1855)