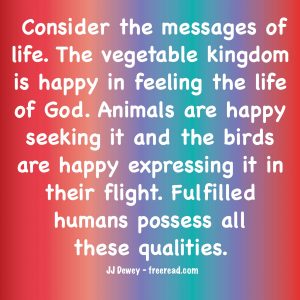 “Since we only have about 1000 lifetimes as humans we must be able to incarnate as other living beings too? I understand that in the future (seen from this point on this level) we are going to link with other humans and form molecules, but what kind of incarnations did we then have before these 1000 lifetimes on earth?

I thought we were animals – maybe on another planet, but still animals. Is my spirit ONLY able to incarnate into human lives? If so – how come angels and devas can incarnate as humans?”

JJ: Those who are native to this solar system began their human evolution in physical reality in a past incarnation of the solar system itself many billions of years ago. There most of us perfected our physical forms as has been revealed by DK. In that past system we also went through many incarnations, probably around a 1000 or more. Before this system we were Becoming in the higher worlds preparing for the physical opportunities to come.

In the distant past our Higher Self sent a portion of its consciousness circulating through the lower kingdoms, but it was not a large enough portion to produce human consciousness. Our essence needs to have some experience in all kingdoms to master physical reality.

Many people seem to have past memories of being animals because we have numerous perfected lower lives within ourselves who are joined by molecular order and these lives identify with us or are seeking to be one with us, the greater lives.

The numbers that Paul refers to create a symbol that is you and this symbol is structured to fit first into human type of form and intelligence and then combine into greater lives and attract more complicated symbols of the mind of God.

If you have a modern Pentium chip in your computer you would not want to attempt to run a 486 computer with it. Instead you must create the computer around the new chip. The correlation is not exact but gives the general idea.

The intelligence that went into the old chips was used as a foundation to create the form for the new generation.

A Molecule somewhat corresponds to gathering numerous low powered chips together to create one of greater power.

Members will still be their individual selves, but the Molecular Order through identification will take us into higher consciousness and ability.

As human essences we have incarnated in a number of forms comparable to human intelligence. This includes part of he deva evolution. In ancient times on earth some humans incarnated as the highest of the animal kingdom to assist with their identification with the human.

And yes we will go in consciousness where none has gone before (at least on this planet). Contrary to popular belief there are new things under the Sun. This is why God says” “Behold, I do all things new.”

If life just does the same things over and over what kind of livingness is that? Even the life of God Itself has a thrill by going into totally new territory.

A reader seemed to think I did not realize that the United States is a Republic instead of a democracy.

What is democracy but majority rule? Many often technically make a mistake in calling this nation a democracy because the election process within this nation is governed by majority rule or democracy. So in comparison to Cuba, for instance, we do have elements of democracy and they do not.

Our government is often called a democratic republic since it has elements of both.

Many people seem to think that the founders were against leaning toward democracy but the Big Kahuna as far as founding fathers of our governing documents go, Thomas Jefferson had other ideas and a number of the founders thought along the same lines. The closest the world has come to a true Democracy is Switzerland.

Here are some of his statements about majority rule:

“If we are faithful to our country, if we acquiesce, with goodwill, in the decisions of the majority, and the nation moves in mass in the same direction, although it may not be that which every individual thinks best, we have nothing to fear from any quarter.” –Thomas Jefferson to Virginia Baptists, 1808.

“[Bear] always in mind that a nation ceases to be republican only when the will of the majority ceases to be the law.” –Thomas Jefferson: Reply to the Citizens of Adams County, Pa., 1808.

“Absolute acquiescence in the decision of the majority, the vital principle of republics, from which is no appeal but to force, the vital principle and immediate parent of despotism, I deem [one of] the principles of our Government, and consequently [one of] those which ought to shape its administration.” –Thomas Jefferson: 1st Inaugural, 1801.

“This corporeal globe, and everything upon it, belong to its present corporeal inhabitants during their generation. They alone have a right to direct what is the concern of themselves alone, and to declare the law of that direction; and this declaration can only be made by their majority. That majority, then, has a right to depute representatives to a convention, and to make the constitution what they think will be the best for themselves.” –Thomas Jefferson to Samuel Kercheval, 1816.

This is just a small sample of his writings that support democracy.

“If you pour say 10 percent poison in pure water it contaminates the whole pool. So until one is 100% pure in heart they cannot bring forth good fruit that is why there is no Zion society etc. We are all evil based on this.”

JJ: This would be true if we are in a stagnate condition as still water is, but remember the words of the scripture: “How long can rolling waters remain impure?” D&C 121:33

If there is an attempt to pollute a working disciple the impurities will be washed away with good works, love and the cleansing activity of the Holy Spirit.

It is a false principle to wait until you attain purity in the still test tube before the building of the kingdom of God is attempted. Purity is a natural thing when one becomes a point of moving loving force within the fiery will of God.