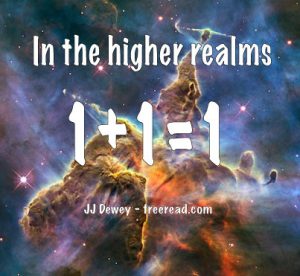 One Plus One Equals One

I was asked the following question concerning the Molecular Relationship:

“It seems that the Molecule comprises 12×2, plus one leader, so effectively 13 units of people are involved. So why isn’t the number 13?”

First let me state that in the Molecule the male and female are counted as one unit. In defiance of the laws of mathematics 1+1=1. Actually, this is in harmony with the Law of Fusion. Neither the male or female is left out.

In the Piscean Age the attempted arrangement of the Molecules was on the basis of 12 plus one in the center with the center being Jesus in the days of the Apostles. Until a church was firmly established the molecule consisted of the twelve units with the invisible Christ in the center. Later an external substitute for the   Christ was created in the figure of the Pope.

The central figure thus became a prototype for a figure of infallible authority. During the past two thousand years this has been corrupted into the distortion of man replacing God as ultimate authority and the creation of the Beast as prophesied by John in Revelations which we talked about at length earlier.

In this age the creation of the Molecular Order will be slightly different physically but with the same creation principles being followed.

Unlike past ages as the human initiator I will not be in the center as the thirteenth member, but my wife and I will be one of the twelve units as equals with them. Nevertheless, there is still a thirteenth in the center and that is the Christ Himself who will establish a link with us between heaven and earth.

Because the thirteenth authority figure is to be invisible at this time it will not feed the temptation to set up a physical authority who will be a substitute for God.

“I was also wondering about the fragility of the Molecule. It seems that when the leader dies, the Molecule dies with it and no lasting benefit is achieved. Is the difference this time to be that the Molecule will last? Were the other attempts planned as prototypes of the lasting Molecule to come?”

One of the major problems 2000 years ago is that great distances often separated the Apostles and most of them were killed before they could get together and replace the missing ones.

We have many advantages in this age – the internet and other forms of communications, as well as air travel so we can reach any part of the globe in a day or so. If a Molecular Member dies or quits the group he can be replaced and balance can be obtained. Once there are three or four Molecules then if there is a betrayal as in the days of Jesus the two stable molecules can lend energy to the unstable molecule and thus bring assistance. When there is only one molecule there is more fragility.

The brotherhood always knew that lasting Molecules would not be created in the Piscean age, but the attempts gave the workers (as well as the Masters) experience that is carried over into this age.

I was asked about the three and a half generations mentioned in the Book of Revelation and how it may apply to the attempt by Joseph Smith to create one.

The way the scripture is written the indication is that the “woman” (molecule) will be in the wilderness for three and one half periods. This could be generations, or it could be something else. Forty years has kind of been assigned to a biblical generation because after forty years of wandering in the wilderness all the Israelites died except for three or four.

In our age a generation could be rounded out to fifty or sixty years. On the other hand, it could be three and one half Saturn Cycles. I believe the scripture was written somewhat ambiguously because the exact date was not a set one. Many of the workers who came with a mission in this age have been sidetracked.

I know the time is close for Excalibur to be released from the stone once again, but I will not predict the exact date. I only know for sure what I have been told which is this:

“Gather around you people who will listen to what you have been given and when the number is sufficient I will come to you and give you more.”

From this revelation I have the impression that this is a prophecy of the link up of the Molecular Order on earth with that of Heaven.

I was not told the number I had to gather with me but assume that it is at least 24 able to reach soul contact together. I am also not sure if the internet gathering is sufficient, but nevertheless my impression is to make the best of what we have to work with despite our distances and much good will come from it.

“If I think I have an idea about who might be my working partner – should I email him and make agreements about it – or should I wait (being the receiver!) and see if he emails me – or should I just go ahead and regard him as my partner when I am in NJ no matter if he approves it or not (he might not even know it then)?”

Answer: Don’t forget that both males and females have both energies within ourselves and we should always use them with judgment. If you feel impressed to make the first contact I would go ahead with it. If any of you have a name of someone in the group cross over your mind then go ahead and make contact and see if the feeling is mutual.

For right now the exchanging of ideas and thoughts about group discussion and more casual things that come to mind is a good place to start in creating a working relationship.

Concerning individual difficulties and how they distract members from forming a group – this is to be expected. Because this is an important move whenever one seeks to do such a thing as establishing a spiritual group, a similar type development will take place. It may seem as if heaven and hell are combined against you. It has seemed that way for me, but I ignore it to the best of my ability and proceed forwards.

Thus if you think you can put things off and that the formation of the group will be easier later, you may be mistaken.

Individuals need to decide whether they are going to do the project or not as Dave did in the parable. Then when you really decide to do it proceed no matter what.

“Will there be only one Molecule connected with the Christ? I would think that once the word gets out and the soul connections are made that tens of thousands of complete molecules of 13 will be made. I realize that Christ, as a Master, must have many capabilities – will he head them all, or just the Molecule of the Masters-to-be?”

Every molecule created will be connected to the first molecule which receives spiritual energy and instruction from Christ and passes it on. Thus each molecule has equal access to Spirit and when activated through the linking principle, has all the advantages of the initiating molecule.

This is the second stage in materializing the second coming (or reappearance) of the Christ.

Don’t look for people jumping on the bandwagon in droves here, at least at first. Finding even 24 people who can be one through soul contact is difficult enough. Many will come in wanting the molecules to adjust to their personality level rather than them adjusting to the oneness of the soul.

It will be extremely important that the initiating molecular members all be at-one with the soul or all molecules created afterwards will be flawed, like an imperfect crystal.

Before everything is said and done I will probably be called a dictator for insisting that all members of the first molecule reach soul contact together and thus achieve oneness in thought – but this is something that must be achieved to a workable degree.

This is why Jesus called John the Baptist the greatest prophet who ever lived. Because he prepared a molecule for Jesus that was capable of soul contact and oneness in thought and turned them over to Jesus after the Spirit descended upon Him.

“I do not know if this means anything, I had a dream the other night, I can not clearly remember all of it but I do remember a sword with a I believe to be inside a crystal stone…can anyone explain my dream to me and all of you beginning to mention this?”

We are not likely to have a physical Excalibur in this age for the sword and the stone are symbols. The stone is a symbol of Christ and the sword is a symbol of the Word of God, or truth. By creating a molecular link with the Brotherhood of Light through Christ (the stone) the Word of God (the sword) is unsheathed and cuts asunder truth from error to build Camelot (the kingdom of God).

It is interesting that the name Peter means Rock or Stone and Jesus planted his word (the sword) in him and through Peter the first working Molecule continued with the invisible Christ assisting.

The name Arthur is from the Celtic “artos” which also means “stone.” It is also interesting that my wife’s real name is Artie which comes from Arthur. Perhaps her support keeps the sword of truth alive in me more than I know.

A reader expressed some confusion concerning the numbers involved in the molecule and wondered if we may have enough to create one presently and how we will know when the time is right.

Each human molecule has twelve male/female units. Each unit consists of one primary male/female plus possible associates as illustrated in the book.

In the center of the initiating molecule will be the Christ. Whether He has a separate female companion or has a fullness of male/females lives within Him for balance is not for me to write at this time, but I will say this.

He is overshadowed by the Ancient of Days and in the relationship Christ is the receiver (female) and the Logos is the sender (male). In relation to us they as a unit are definitely male or sending.

As the molecules expand into 2, 4, 12 and 24 structures the consciousness of Christ will expand with them always being in the center. Various Masters will transmit energy to numerous molecules, but the consciousness of the Christ will be in the center of them all as the invisible authority, this time replacing the idea of a visible infallible physical authority from the Piscean age that caused the world so much grief.

I will know we have enough for the first molecule when I count them up and I number twelve totally committed male/female units that can see eye to eye in the soul and touch the Spirit as one life.

All who desire to create Molecules are welcome to step forward. If you are ready your spiritual endowment will come. If not the path to follow lies before you to tread. If you are pure in heart you will always have your next step revealed.