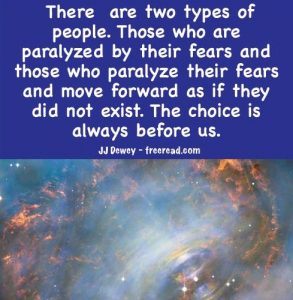 A reader says this: “I can’t imagine having a fear of God. It just doesn’t fit in with my beliefs. It is one of the reasons that I left the church and its doctrines behind.”

The religious zealot does indeed fear God because of illusionary beliefs planted into him by various preachers and belief systems.

On the other hand, most new agers do NOT fear God for the same reason. They see nothing to fear because they have never encountered the Angel of the Presence or a Higher Life on First Ray energy. Many have the illusionary belief that all encounters with the God presence is very pleasant and only a deluded one would consider fear.

The typical New Ager is a little like Luke in Star Wars who thought he had everything down. The initiate is like Yoda who knows of the realities to come and tells him “you shall fear.”

Many go through numerous lifetimes with this belief until they encounter the Dweller on the Threshold. This dweller is terrifying enough, yet to destroy this Dweller one must face the Angel of the Presence which is even more terrifying because this, once encountered, opens up such power that it will feel like you could be destroyed body mind and spirit with a blink of an eye. Moses had to spend 40 years in contemplation of the presence before he mustered the courage to face it. When he finally did face it he was transfigured.

There are many life forms and beings working on the side of good who are much higher in vibration than ourselves of which the average seeker is totally unaware and unprepared to enter into the presence of such. This difference in vibration can require great courage to approach.

Your body for instance is 98.6 degrees but if it touches something 200 degrees discomfort would ensue.

Even so it is with us ordinary humans and the higher God lives. We must raise our vibration (temperature) in order to endure their presence or even the bravest of hearts will experience some fear.

Many believe that fear is purely based on illusion. I may be the first to say this, but yes, fear is based on truth. How one reacts to truth perceived can determine the fear.

Let me give an example. Let us suppose that you are living a very positive life and the thought of any type of fear is the farthest thing from your mind as you are enjoying a ride in the country with your wife and kids. As you descend down a mountainous range you feel quite secure for you have traveled it many times, but this time is different. This time your brakes go out. You press the pedal several times and nothing happens as you speed around corners barely managing to evade running off the edge which would surely end the lives of you and your family. Because you have traveled this road many times you know things will only get worse for incline just increases. You make a calculation that tells you that the chances are that very great that you and your family are going to be greatly injured or die.

This “truth” brings numerous fears to your mind.

As we said previously, fear always involves a loss of some type and the possible loss here is very real. The fears in this situation revolve around the following losses:

(3) Loss of opportunity for your kids to grow up and face the challenges of life.

(4) Loss of an earthly relationship with your family.

Numerous other losses could be cited here but the point is that all these fears revolving around loss are based on a very probable truth.

Now even if a miracle happens and you regain control – this does not mean your fear was based on illusion. At the time that you were descending without brakes it was indeed true that you had a high probability of disaster. The only thing that averted it was the fact that your fear did not let you accept such a fate and you did all in your power to change the future.

Even a fear within a dream is based on truth. I used to dream on a regular basis of this grotesque monster in various forms that chased me. It often pursued me for some time and often caught me at some dead end and as it approached me I experienced great fear and usually woke up about that point.

Now one may object her and say “That was just a dream and not reality so your fear there was based on illusion.”

Not so my friend for it is indeed true that I was having a dream and that within the dream I was perceiving a monster and there was a real possibility of loss.

What were the possible losses involved?

(1) I was enjoying most of the dream and the monster threatened the loss of an enjoyable dream experience that I wanted to savor.

(2) Loss of sleep. I didn’t want to wake up and have to struggle getting back to sleep.

Then one night I was having the dream something different happened. The monster had me cornered and there was no place to run. I was to either die within the dream, never a pleasant experience, or figure a way out. I looked up at the monster and he was ferocious indeed. He was about twenty feet tall and mean as hell and appeared ready to devour me in about three seconds.

As I contemplated the thought of fighting back occurred to me for the first time, but I had difficulty in accepting it for the monster looked a hundred times stronger than me. When I realized that I was faced with the choice of fighting or doing nothing I decided to go out fighting and I attacked the monster. To my surprise I saw fear in the monsters eyes when I attacked. This gave me courage and I continued and when I pressed forward I discovered to my joy that I was much stronger than the monster. I then proceeded to give him a good beating and finally picked him up with super human strength and threw him off into oblivion.

The reason I talk to her about truth within dreams is that I’m sure some are going to tell us that life in these dualities is not real, therefore, all fear is based on perception within the dualities which is not real.

Whereas the real truth is that whether we be in the illusion of physical duality, or a dream state it is indeed true that our consciousness is there and the perceptions we have there create a real experience. Even though the monster did not exist in this waking reality, the experience of the monster was real and this made the fear real.

If you lose your brakes going down a steep incline it does little good to tell yourself “this is not the true reality.” It is a true reality that you are in the experience and if you do not make the best of it you will suffer loss.

Listen to what a Master of Wisdom has to say about fear:

“You ask: What are the basic causes of fear? To that question, if carried far enough back into the esoteric history of the solar system there is no intelligible answer to be given. Only the advanced initiate can comprehend. Fear has its roots in the warp and woof of matter itself, and is par excellence, a formulation or effect of the mind principle, and a result of mental activity. The fact that birds and animals know fear puts the whole subject upon a wider footing than if it were simply a human failing and the result of the activity of the functioning of the human mind. It is not incident upon a man’s possessing a reasoning mind; if he used his reason in the correct way he could eliminate fear. It lies in what is called cosmic Evil-a high sounding phrase, conveying little. It is inherent in the fact of matter itself and in the play of the pairs of opposites-soul and matter.” A Treatise on White Magic, Page 298

In harmony with this Joseph Smith made the interesting statement that “God created the worlds with fear and trembling.” This would explain why “fear has its roots in the warp and woof of matter itself.”

Now some have said that all fear is caused by a lack of love, but such is not the case. In the example of the fear generated by the failing brakes the intensity of it was increased because of love for wife and children.

Fear is overcome through using the mind to calculate the best possible moves to eliminate the perceived future loss. For instance, in my dream I mentally calculated that the only possible way out was to fight and this eliminated the fear. I did not overcome the fear of the monster by loving it, but by defeating it.

It is true that many have fears that are not justified because of wrong perception. For instance, one may fear that his spouse is cheating on him because of misperception or a wild imagination, but when he has attained correct use of the mind then his perception will be accurate. When perception and calculation are accurate then fear will be based on the real as in the example of the loss of the brakes.

This portrayal of fear by many teachers of the day as a thing held only by the deluded, the unloving, the unevolved or the ignorant has led many into great illusion. Because many seekers have swallowed this pleasant sounding doctrine without processing it through the mind they enter into a world of deception and denial.

When a fear surfaces, instead of facing and defeating it, they generate a “fear of fear” and they will think something like this:

Thus the seeker deceives himself rather than facing the fear and transcending it. That fear which is denied or suppressed does not go away. Instead it foments and grows and when it resurfaces it will loom greater than it was at the moment of burial.

The Now is the time to face and overcome and join in the company of the Great Ones.