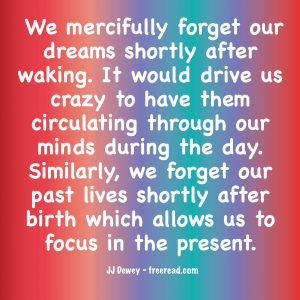 Living in the Present

As I looked through my e-mails and Keys postings, I find it interesting that the first e-mail I read was from a lurker who tells me he is Joseph Smith come again and that I am called to repentance. Then the next post I open from the group I find a new member is telling us he is Robert Browning come again.

A while back the group interrogated me a bit as to who I may have been in the past and I refused to give any information. One of the reason we lose our memories is so we can begin anew and make a new start in a totally new situation. Often times if we were to regain memories of the past it would interfere with what we are supposed to do in the present. The tendency would be to repeat the past rather than pave new ground in going where you have never gone before.

Now I say this to teach a principle and not as a criticism of the Robert Browning character or even the half dozen Joseph Smith’s come again I have met in my life – along with a few Messiahs.

A sure sign that a teacher is captivated by glamour and some illusion is a proclamation that he is the new messiah or some great being from the past come again.

Notice that Jesus was silent with the masses about who he was. They thought he may have been Jeremiah, Elijah or one of the prophets, but he never confirmed their suspicions. They also thought he may be the Messiah, but again he said nothing. Instead he let his works and his words testify for him.

There were only two possible acknowledgements of who he was. After Peter received a revelation on the matter Jesus told him he had received it from the Father.

At his trial he was asked who he was:

“But Jesus held his peace. And the high priest answered and said unto him, I adjure thee by the living God, that thou tell us whether thou be the Christ, the Son of God. Jesus saith unto him, Thou hast said…” Matt 26:63-64

Even at this point he did not admit for sure who he was. He was virtually saying “you’re saying it, not me.”

The fledgling avatar may object and say: “But I was Moses in a past life and I have a great message. Everybody just thinks I am Fred Snodgrass in this life and they will not listen to me. But if I can convince them I am Moses they will listen and then I can do a great work.”

Answer: Anyone who listens to you because they think you are Moses will only filter teachings through the emotional (astral) self. Only by teaching as who you are NOW can you reach the souls of men. So it has been with the true spiritual teachers in the past, so it is now, and so it will be. It will always be the eternal present and it is there that we must live.

Now our friend may have been Robert Browning. I am sure it matters to him but it does not matter to me. What does matter to me from what he has posted is that he is very strongly attached to his past love who he deems as a soul mate.

The first liberating teaching I can give here is that there is no such thing as a soul mate of destiny or the twin flame idea. In the beginning we were all created as reflections or in the image of God and each of us has the fullness of God within us waiting to unfold. Another thing we all fluctuate in cycles between male and female bodies so you will have lifetimes where the love of your life may be of either sex.

Eventually we merge with all other souls through the principle of Identification – that is we learn to identify with the one universal God. The closest thing there is to a soul mate is the first person that you merge with in the identification process with the one God. This makes the two become one. This soul mate can be anyone you choose to work with in the marriage relationship. If one person does not work then you can choose another.

My advice to the reader is this. Since the person you chose is not presently choosing you back then let her go, find another and move on. An opportunity may come to renew the relationship in the future, but putting additional emotional investment in it now will only delay that opportunity. Instead, you must create a vacuum through the principle of detachment. Then if she through her free will fills the vacuum at some future date you can turn your attention back on her. If she does not then you must move on with no feeling of regret.

Only by detaching yourself (with no denial) can the magnetic force be created to bring fresh opportunity. The detachment must be so complete that if nothing ever happens that is all right also.

This takes an act of the will and is difficult, but the rewards are great. I speak here from experience.

Also I do not know if I ever welcomed Susan to the group. I notice that she has been making some very good posts. Keep it up, even if I do not always have time to comment.

Question: I find the idea of the Molecular Relationship fascinating. Has anyone tried putting one together?

This group is the first online gathering place for candidates for the Molecular Relationship. Finding twenty-four people who can achieve oneness through soul contact is a Herculean task, but it will be done. The friction, even among good people in this group foreshadows the difficulty. After the first molecule becomes linked and functioning and seekers see that a new life form is created then the molecules afterwards will come much quicker.

The time for the first molecule is not yet. Some will begin to receive inner stirrings about it when the time approaches.

“JJ mentioned that the past model has been largely authoritarian with few exceptions. I am wondering why it has been so difficult for this to catch on? Is it because of our current evolvement? And from what I gather from what you have said this is changing or about to change drastically is that true in your opinion?”

Part of the reason is caused by the energies we are currently passing out of. For over two thousand years we have been ruled by the sign of Pisces. This is why the early Christians used the sign of the fish since the fish is the symbol of Pisces. Current Christians with a fish on their car do not realize they are displaying an astrological sign.

Also notice in over 95% of the cases the fish the Christian displays points to the left. The left is a symbol of the past and indicates that the contemporary Christian has his mindset in the past instead of the present or future.

Pisces is the last sign of the Zodiac and as such this is a period where all unfinished business is taken care of so a new beginning can be made. Everything that did not prove to be of eternal value in the past eleven ages comes to a climax in Pisces and those under its influence learn the great lesson of letting go. That is they learn what they must release themselves from so they can make a new beginning.

The most important thing the human race is learning to let go of is unjust and unearned authority. Through our painful experiences of the past 2000+ years with Caesars, Napoleons, Conquistadors, Inquisitors, Hitlers, Popes, false prophets and kings we are finally beginning to “question authority.” This questioning reached a turning point in the Sixties and is now proceeding on a more gentle level that will be accelerated from time to time.

Seekers must learn the difference between earned and unearned authority, between the just and the unjust.

Just because a person is a Ph.D., a Priest, or proclaimed by the press to be right does not mean that he is not to be questioned. And just because another has no degree and no title does not mean that he has not carefully thought things through and is very accurate. Humanity is at its infancy in achieving soul contact. Most people are controlled by their astral body and thus by authority.

The messages from the Spirit must come from the mind and circulate through the heart. The mind must be open to contact. We are approaching an age that for the first time there is sufficient numbers of people with both hearts and minds evolved enough to become one through the soul and to be free from unjustified authority.