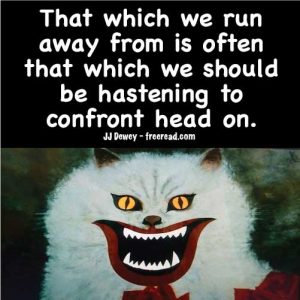 Question: Was the modern-day suffering of the Indians due to an unsettled “cause” from the ancient past? Or was it simply a collective of individuals exercising their free will in the environment at the time?

Both. And some of those who were the cause of the suffering of American Indians were ancient Indians reincarnated as white Americans fighting their own ancient race.

Djwhal Khul tells us that there are a group of very high entities called the “Lords of Karma” who guide events to insure that karma is justly administered.

When a negative act happens, like a murder for instance, the victim is rarely just some person   randomly selected, even if this is the conscious intent of the criminal. The one who commits such a crime is as much an instrument of murder as the cause, for if the victim with karma to pay was not a victim of person A he would then be a victim of person B.

Through one means or another each negative cause that we send out has an effect returned in kind that makes us a prisoner of karma as indicated by Jesus: “Thou shalt by no means come out thence, till thou hast paid the uttermost farthing.” Matt: 5:26

There is a chain of causes responsible for all current effects and circumstances. Every historian realizes this and traces back almost every aspect of our civilization to events which occurred over thousands of years. By the Law of Correspondences that which applies to the greater applies to the lesser and therefore applies to the eternal pilgrim passing through numerous lifetimes.

Question: Please explain the mechanics of how actions of people in the past, could FORCE people to act in certain ways in the present.

The discovery of the printing press centuries ago does not force people to print and read books today. Even though books are printed through free will activities this effect of the invention is completely predictable.

The results of karma are similar. If you murder someone, for example, you initiate a force that is eventually picked up by someone who by their own free will returns the deed.

And I saw heaven opened, and behold a white horse; and he that sat upon him was called Faithful and True (Christ), and in righteousness he doth judge and make war. Rev 19:11

Here we are told that even Christ will make war when it is done “in righteousness.” Righteousness basically means to make right use of.

Djwhal Khul tells us that the Christ himself did actually make war against Hitler and the Axis forces during World War II by working telepathically through Allied leaders. This was definitely a right use of war.

We now have a new war to face with the current political discord as well as a world wide network of terrorists who desire to destroy civilization again. This arouses the Christ to wage a new war in righteousness. Let us all hope that those here on earth who lead the charge will listen to the voice of their true general.

I have been called hypocritical for promoting the Principles of Unification while stating that there is also a time and place for war.

Let me first say something about the hypocrisy accusation that mindlessly surfaces on a cyclic basis. Most of the time when this word is used it is thrown out as an attack with nothing to back it up.

This word should only be considered when the post clearly states what the hypocrisy is, otherwise this is nothing more than name calling.

Hypocrisy means to act or speak contrary to your beliefs and this to my knowledge I have never done. I have always believed there is a time and place for war, as well as peace, and nothing I have written contradicts this.

The turning the other cheek principle only works when you are dealing with decision makers who have not rejected communion with the soul. Fortunately, almost all of common humanity are capable of having their hearts stirred to a degree by this love energy. Therefore it is good to turn the other cheek as well as do good to them who despise you if you are dealing with mainstream humanity. In many cases this touches hearts and stimulates spiritual evolution.

On the other hand, the tables are turned when the decision maker of the circumstance is an agent of the Dark Brotherhood. The Dark Brothers have totally rejected the soul and unselfish love has absolutely no impact upon them in a positive way. If you therefore turn your cheek on a Dark Brother, or one under his control, he will strike you on each turn of the cheek until you are wasted. He will do this with no pity, feeling or sensitivity in the heart.

A line from the movies applies here: “Nothing personal, this is just business. I must destroy you.”

The agent of darkness, when it fits his need, will proceed to destroy with as much detachment as if just doing business, or his job, like a janitor sweeping a floor. Just as he has no feelings about the floor, the Dark Brother has no feelings of remorse about harming a brother in his way.

These agents make an exception to the turning the other cheek principle.

Because in dealing with dark agents this sacrifice does no good whatsoever and a Master of Wisdom is wise enough to not support any effort that is futile and useless.

This is the reason that Christ and his Hierarchy joined energy with the Allied forces against Hitler. Because he was a true agent of the Dark Brotherhood it meant that no turning the other cheek, appeasement or peace movement would have any effect on him except to encourage him on the destructive path.

When an agent of darkness, divorced from soul contact, appears as an enemy of nations, who are striving for improvement, then the only choice available is to defeat him and take away his power. This we correctly did with Hitler.

Now we have another enemy to deal with which is the true face of the conspiracy that so many are concerned about. Many are so zealously into seeing conspiracy among international bankers, Jews, CFR, the media, politicians etc, that when the materialization of the true conspiracy hits us in the twin towers we still do not recognize it.

Sure there are plenty of things to be concerned about with the powers that be, but this revealed threat that we have before us is the real thing and must be defeated. No amount of love or good deeds will assuage Osama Bin Laden for he is a true agent of the Dark Brotherhood.

None of the imagined evils of present governments, such as computer chip in the hand, tracing phone calls or e-mails, FBI bungling etc holds a candle to the evil that could be unleashed if we just sit back, meditate and do not rouse ourselves and fight for the future of mankind.

If you pass by a man who is starving and he asks for food, how much good will it do him if you just send him love and light and move on? Thoughts of love and light must have an end in view followed by action to have power.

In 1942 George Orwell wrote this, in Partisan Review, of Great Britain’s pacifists: “Pacifism is objectively pro-Fascist. This is elementary common sense. If you hamper the war effort of one side you automatically help out that of the other. Nor is there any real way of remaining outside such a war as the present one. In practice, ‘he that is not with me is against me.’ “ England’s pacifists howled, but Orwell’s logic was implacable. The Nazis wished the British to not fight. If the British did not fight, the Nazis would conquer Britain. The British pacifists also wished the British to not fight. The British pacifists, therefore, were on the side of a Nazi victory over Britain. They were objectively pro-Fascist. An essentially identical logic pertains now. Organized terrorist groups have attacked America. These groups wish the Americans to not fight. The American pacifists wish the Americans to not fight. If the Americans do not fight, the terrorists will attack America again. And now we know such attacks can kill many thousands of Americans. The American pacifists, therefore, are on the side of future mass murders of Americans. They are objectively pro-terrorist.”

Something to think about.