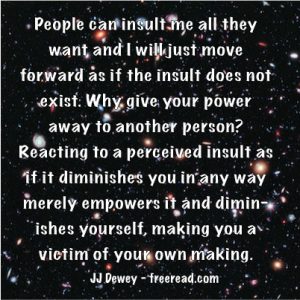 The Law of Karma
Or Cause and Effect – Part 3

Is it true that feelings, the sharing of energy or attachment creates karma and we can be released from it just by letting go?

Karma is usually defined as either a debt to be paid or a positive balance from which one may draw benefits. Thus the mere act of caring has little to do with the creation of karma.

I believe I know the teaching you are referring to, however, and I believe it to be a true one. It goes something like this.

Strong emotion such as love or hate, desire or repulsion, fear or protectiveness creates not karma, as we understand the term, but an energy link that will bring you into repeated contact with the person with whom you share such emotion. If such emotion carries with it any degree of attachment then this person must be faced in relationship again and again, life after life, until you learn to let go of him and the emotion connected with the relationship.

Even the lower octave of love creates this problem. Love from this angle would be defined as: “the desire to keep another in relationship because of what they do for you rather than what you can do for them as the prime motivator.”

This is why forgiveness is so important. If you hold a grievance and do not forgive, then that negative feeling creates a link that will draw that person back into your life until you do learn to forgive him on all levels.

Imagine the future consequences if you have a dozen people in your life that you have not forgiven. In a future time or life you will have a dozen annoying people in your circle of work or friends and be beside yourself as to how you could have such bad luck in choosing associates.

If you merely have a feeling of attachment toward another a real debt (karma) is not created. Thus you can free yourself of the link instantly at the moment you let go of attachment. This concept is probably why some believe that you can release yourself from karma with a decision – because they have mistakenly called the linkage of attachment a karmic debt. Instead the linkage we have to others because of attachment merely holds a lesson to be learned.

Karma is different. You can learn your lesson, but still owe the debt just as happens in real life. You can run up your credit card balance too high and learn the lesson not to let that happen again, but the sinking in of the lesson does not pay the bank. You often find yourself making payments long after you have learned to not over extend yourself.

The linkage because of emotion creates no karmic debt, but is immediately dispelled by forgiveness or the release of the binding emotion.

A reader says: “There again, humanity has made a collective judgment that it is wrong to share sexual partners with others. That is not the ultimate truth in my mind, but something we have made so.”

The main point I was making was not around sex, but around the subject of honoring your commitments and your word. If a person makes a promise to not eat peas and another is depending on this promise for some reason then he should honor his word. If he does not want to honor it then he should seek a release from the person to whom the promise was made. This has little to do with whether peas are good or bad for you.

If we are to learn to be one with God and establish reliable soul contact through that oneness, then we must all learn to honor our word when it is given to another. This is especially true if it would create pain or harm to this trusting person if the word is broken. If we wish to obtain liberation then we must learn to be as the Spirit of God within, and keep our word in all matters. When we become like the Spirit, we commune with the Spirit.

Because I understand this principle I have always been very selective about giving my word. The breaking of our word does create definite effect and karmic debt that must be dealt with in a future time.

If you have an uncommitted relationship and have sex with another person with the understanding that multiple partners is part of the agreement, then you are not responsible for your friend’s hurt if he should take offense. But when you make a promise to another soul and that person places trust in you because of that promise then the breaking of that promise can create tremendous pain, pain that would not occur if both parties were true to their word.

If you thus betray a loved one through the breaking of your word, the time will come that one with whom you have placed your trust and given your heart will betray you.

The pain through the betrayal of a loved one has little to do with attachment. You can be very detached from a spiritual point of view yet suffer loss through the broken word.

But don’t we suffer pain in relationships because of attachments? Not necessarily. In a romantic relationship there is a bonding through the circulation of energy, for the two become one as the scripture says. Now you may figure that you are not attached to your little finger and could live without it, but this detachment does not spare you any pain if someone were to rip it out of your hand. Similarly, in a committed relationship the other person becomes like an extension of your body and this severing of half of that which makes up a greater life is very painful no matter what state of detachment you have reached.

The Christ Himself, the greatest of us all, formed a greater life out of the twelve disciples and because of the flow of energy and the betrayal by Judas, suffered enormous pain and came close to dying in the Garden of Gethsemane as a result.

One, who is detached, as the ancient wisdom teaches, can release any person from any relationship and let them go their way. But he will realize the principles involved and work with the energies so the pain on all sides is at a minimum.

Patrick basically asked me how karma would work out if there seemed to be no learning value attached to it. Why punish someone who has learned the lesson?

First of all the word “punishment” in relation to karma is somewhat misleading and not a good fit. For instance, when you take out a loan at the bank and then make payments do you think of yourself as being punished whenever you make the payment?

So how do you feel about it?

The normal feeling is that you knowingly took out the loan for a reason and you are making a justified payment and you are okay with that. You normally only feel punished if you do not make the payment and the bank comes after you.

Secondly, lessons are always learned in the paying off of karma.

“Let us say someone committed murder in a previous life out of jealousy. Then, in subsequent lives, through great self-work and spiritual growth, they learned non-possessiveness and the sacredness of all life. Let us say they went even further and through love and service saved many lives, influencing them for good, even preventing some from committing the same crime. What then would be the point of them being murdered?”

If you take out a loan from a friend (and the Lords of Karma are certainly our friends) the friend will allow you to repay in a number of ways as long as the value is there.

Le us say that you borrow $1000, but do not have the cash, but do have some silver coins stored away. If you offer him $1000 worth he will probably take it. Similarly, maybe you have a snow blower worth about that much and offer it to him. If he could use one he may take it.

Then maybe you have nothing to pay with but your labor. Maybe you are a good mechanic and offer $1000 worth of service to his vehicles. Being a good friend he would probably take it.

Taking you to court would be the last resort and he would only do this if you stubbornly refused to work on the debt and could learn the lesson no other way.

Now let us look at your example. A guy commits murder and after a couple lifetimes learns his lesson without being murdered in return so there seems to be nothing to learn from being a victim. Does his debt disappear? That is like saying does the effect disappear?

No. Effects are eternal until the energy is played out with new cause.

So, how is the debt to be paid?

Punishment is the slowest way to pay the debt. Debt can also be paid through service, which often turns out to be an enjoyable way to pay it and always produces growth.

If the person has advanced enough to make a service payment he may pay off the murder by:

(3) Sacrificing his or her own life for a good cause.

(4) Some type of service that helps the lives of many.

However the payment is a made, it must be made before liberation is achieved.

Now consider Hitler who is responsible for millions of deaths. Supposing he decides to redeem himself – do you think he will have to be murdered millions of times? Of course not. That would accomplish little. After being a murder victim a dozen times or so he would surely get the point.

So how will he pay his debt?

He would have to make enough progress on the path of light to eventually get in a position to save millions of lives.

This could be accomplished by becoming a great leader and saving his nation from a tyrannical leader.

Or perhaps he could become a scientist and discover a cure for cancer.

Or perhaps he could become a great teacher and save many spiritual lives.

If we could see the past lives of our adored figures in history we would discover that many had past lives of tyranny and destruction and they are coming to incarnation to serve and pay off their debt. Even the Masters we revere had some tyrannical past lives before they learned their lessons.

“To say that life is unfair is to say that God is unfair. When all things are considered throughout the life of the soul, all is fair.”