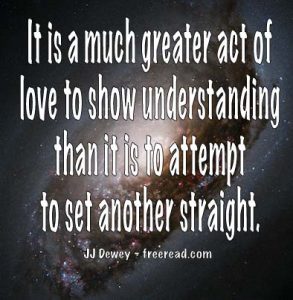 In The Name of Love

We have a couple people in the group who attempt to teach us about love, peace and harmony more than any others?

In almost every post they attempt to illustrate to us by every means possible how the rest of us do not understand these things and if we would merely follow their philosophy that we too would find this most great peace and love.

Now here is what I find interesting.

When these two do not post the people on the group are generally in great harmony, amicable sharing and there is lots of peace and love to go around.

Then as soon as they return to the group there is war, conflict, disharmony and not as much love as before. I often get e-mails from people who are leaving the group or very upset.

Why would this be so when peace and love is at the core of their belief system as they suppose? Why they love all people so much that they would not have even stepped forward to physically stopped Hitler even if it would have saved millions of lives. They believe they see beyond good and evil to the extent that there was no evil even in Hitler or Nero for it is only in the perception of the lesser evolved.

The question is why is this philosophy of peace and love not working for them in their relationship to this group and possibly other groups? The interesting thing here is that interaction in this group is not theory or mind games but interplay occurring in the real world. Here in the real world we have a chance to test theory and teachings to see if they really work.

And if they do not work?

Then we should examine that teaching and attempt to see where the error is and what can be done to correct it.

Perhaps we should do this, but first let me state that I am approaching this in the spirit of peace and love so I hope all understand this.

Is the conflict they bring to us caused merely because they are sincerely expressing their point of view and is it that their point is just different from the rest of us? Or perhaps group members are intolerant of a different viewpoint.

No, this cannot be it because we have different points of view presented when these two are not posting, usually with no conflict involved. Often the situation winds up with both sides acquiescing to agree to disagree and then we move on.

Now this does not happen with our contrarians. For over a year now we have covered similar ground again and again and there has been no agreement to disagree. They have been with us long enough to know the views of the majority on the group and I am sure they have a pretty good idea of many of my views. Thus when they present certain ideas they both have to know that they have war paint on and are making a definitude attack that will be met with many counter attacks.

Now they can say that they are not attacking, but just stating their views and those of us who respond can make a similar statement, but there is deceit and illusion in this approach.

Unless we face reality and have truth in our words, true peace, love and harmony can never be approached.

And what is the truth? Let us call a spade a spade here. Many of my teachings are attacked by them and I respond. It is a simple as that.

One difference between us is that when they attack they do not see themselves as attacking. They do not believe in attack therefore in their minds they cannot be attacking. When I attack or defend I do attempt to observe myself and analyze what is really happening in the interplay. I admit that I often do defend myself when attacked and sometimes counterattack. I try and see myself attacking the illusion rather than the person however.

For instance, I have no malice toward our two disrupters and recognize that they are sincere in their beliefs.

Nevertheless both subtly attack and stir conflict just as real as one who comes on strong with harsh words or shoves others in the subway.

How can this be? Here are examples: of trends of thought that enflame some.

(1) He who would kill in war for the sake of freedom or to save the lives of others “desires” to kill.

No great warrior from George Washington to Winston Churchill to a Vietnam Vet “desires” to kill but many have found themselves where the only way out was physical conflict and to insinuate this was part some dark desire in their heart shows a lack of loving understanding.

(2) Pressing the teaching that there is no evil to the extent that even Hitler was no more a bad guy than was Gandhi.

(3) Then turning around and insinuating that we are evil if we were to kill in self-defense or for the sake of freedom. This seems to put some on the group below Hitler in their minds.

(4) One would have been wrong to kill Hitler, even if it would have saved millions of lives.

(5) Insinuating that they are focused on love and we are not.

(6) Telling us that we have major problem because we do not understand oneness as they do.

(7) Telling us that everything that comes into our lives is because we want it there. This is an irritating thing to tell someone who is suffering or has suffered against his will.

(8) Making blanket statements that all we have to do is think positive and nothing bad will happen to us when many positive people on the group can testify otherwise.

(9) Accusing many of us as being “fear-based” when disagreeing with them.

(10) I would surmise that about 90% of their posts are in support of a stance opposing my presentation of class material. I think most of the group is mature enough to accept a few disagreements, but when one is in constant disharmony with the teacher you begin to wonder why he or she is here. It may appear that they enjoy disrupting things rather than making contributions that bring greater light on the subject under study.

I could go on but these are solid examples of the type of material that is brought up again and again by these proclaimers of peace and they have to realize that they are not taking the direction of peace but are going forth into battle. To inflame and go into battle while proclaiming that you are treading the path of love and peace is inflammatory in itself.

Now don’t get me wrong here. I like a little conflict, but when in conflict I like an adversary who will at least admit he is an adversary. To proclaim you are filling the arena with love and peace in the midst of some of the fiery conflicts we have had does not register as sincere with many readers.

So what solution do I recommend.

First and foremost honesty. If you want to fight then come out in the open and fight and do not hide behind the words of love, peace and oneness.

Second. This is a class where many are trying to learn. I am not perfect, but neither am I wrong all the time. Surely you can make a supportive non inflammatory post or question once in a while that sheds greater light on the subject. If you cannot then it appears that your mission here is to create conflict and not establish peace by any measure.

Third. Let us give each other the benefit of the doubt and realize that we are all in this together. Let us assume the best in one another. No one here seeks fear or wants to kill anyone – most do not even want to step on a fly. All seek for love and peace to the best of their understanding. All desire harmony and oneness with their fellow human beings.