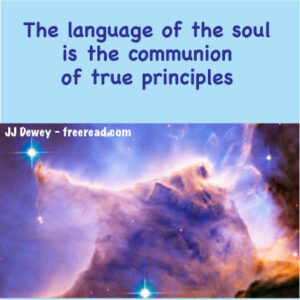 Reader quoting JJ: “The Oneness Principle works through the science of impression, as taught by DK.”

He asks: Where is that taught by DK?

JJ: Quite a number of places. He uses different language than I do and he does not use the term “Oneness Principle.”

Here is one quote:

“The New Group of World Servers (disciples) are impressed by the active INTELLIGENCE of God; they translate this divine impression and step it down in two great stages, therefore, bringing it into concrete manifestation.”

Reader: I would think these are _not_ the same. I get the “impression” that the “science of impression” involves one entity “impressing” something to another and the “Oneness Principle” would more involving “tuning in” to universal principles.

You are right in saying that the Science of Impression is used when a master of this principle impresses information on the mind of another, but its use extends far beyond that.

On the receiving end, the Science of Impression, which includes the science of receiving impression, is used for many things. It can be used by any sensitive person to receive a glimpse into the emotion and thought of another.

It can be used by the disciple to pick up a thought sent to him by a master if he should be so fortunate to have any contact with one.

It is used to pick up thoughts and thoughtforms generated from the group or ashram of which he is a part (often unrealized).

It can be used to pick up messages from his own soul.

The disciple can use it to open the door of the soul and tune into the universal mind or the “active Intelligence of God” as DK calls it in my quote. He can then tune into the universal Internet of which I speak and all principles are available to be impressed upon him. You could say that the akashic records are the great storage medium to be accessed through the Oneness Principle.

Before any of these things can happen, the disciple must become sensitive to impression. A good starting point is to practice being sensitive to the needs, feelings and thoughts of each other.

Reader: Unfortunately, you sometimes do not define your terms very well and the distinct impression is that you are “playing loose and fast” with your terms. 🙂

JJ: I think you’ll find that I am willing to be as specific as any spiritual teacher you will find. In cases like this where it may seem I am playing loose I will be glad to be more specific when asked.

Another reader comments: It’s been a day or so since I finished The Immortal I. I enjoyed it for the most part, but found some conflicting ideas. Like when John said you shouldn’t let anyone be mean to you, to stand up for yourself, else you’ll develop a fatal illness from the repressed, unhappy emotions you’ll experience if you tolerate it. John later says you’re supposed to submit to a situation you don’t like, because you’ll learn a karmic lesson and improve your soul. How does standing up for yourself work in harmony with submitting to abusive treatment for your karmic development? If you stand up for yourself, the negativity should end. That conflict confused me.

JJ: You are not presenting a clear picture of the teachings in the book here. For one thing, the word “submit” isn’t in the book.

Let me recap the principle in a nutshell. Suppressed or denied emotions have a very negative effect and can manifest as various types of disease, most notably cancer. One of the reasons this creates such a problem is that it is a lie to pretend you are fine or that you accept abuse when internally you are resenting it. Dishonesty always brings a negative effect to the evolving seeker.

On the other hand, submission can be done with no dishonesty. I daily submit to speed limits that I think are too low, but I do not suppress my feelings about it not do I deny what I think about it.

There is no conflict here even if a submission was discussed. Submission and denial are two entirely different things.

Vic: Then there was the Song of the 144,000 John taught Joe and Elizabeth, which, if they forgot to say several times a day, meant they’d be unhappy and irritable, even argue at night and go to bed miserable. I don’t understand the ‘pray or suffer the consequences’ concept.

JJ: I don’t understand it either. Are you sure you read the right book?

Neglecting to say the Song does not make anyone miserable, but saying it will uplift one’s spirit. That was supposed to be the message conveyed.

You are the first to get this message from the book. If others see this then perhaps, I need to do some rewriting.

Next the reader seemed to get the impression I associated the Song with piousness.

I don’t see where you get this idea from the book at all. The song has nothing to do with piousness. There is no mention of any punishment for not saying the song.

“I said the Song Monday and Tuesday and felt pretty positive and things went well for me, but I didn’t say it Wednesday and felt irritable and a lot of things seemed to go wrong.”

One could take the books statements about the  Song and apply it to other things such as:

I listened to Tony Robbins tapes on Monday and Tuesday and felt pretty positive and things went well for me, but I didn’t listen on Wednesday and felt irritable and a lot of things seemed to go wrong.

I did my meditation on Monday and Tuesday and felt pretty positive and things went well for me, but I skipped it on Wednesday and felt irritable and a lot of things seemed to go wrong.

I said my prayers on Monday and Tuesday and felt pretty positive and things went well for me, but I skipped them on Wednesday and felt irritable and a lot of things seemed to go wrong.

I watched my blood sugar on Monday and Tuesday and felt pretty positive and things went well for me, but ate some candy bars on Wednesday and felt irritable and a lot of things seemed to go wrong.

I did my exercises on Monday and Tuesday and felt pretty positive and things went well for me, but I skipped them on Wednesday and and felt irritable and a lot of things seemed to go wrong.

Now in these various scenarios you don’t normally think of being punished for not doing the thing. Instead, you think of the positive effect if you do it.

It’s a common occurrence that when one begins to establish a positive habit and then stops that he will feel a marked difference in his daily life. Few would look at such a thing as punishment – and from whom? If there is a punishment there has to be someone doing the punishing. I have certainly never taught that God is sitting up there on a throne watching us for error and throwing down bolts of punishment when we make mistakes.

Our non-dualist friend returns saying: To be frank, I have heard more of these stories of people following the guidance of “voices” in their mind, instructing them too often to do the most horrible things. When interrogated, their explanation mostly was that they heard God telling them to do this.

JJ: There you go again; using the lower mind insinuating a judgement of me in the worst possible light. If you have the opportunity of giving the benefit of the doubt, making a positive judgement or a negative you will go the negative route. If you are trying to present a positive example of the results of your philosophy you are failing big time. Your statement is biased and illusionary for several reasons.

[1] I have never said anything in these posts that I recall about hearing voices. The Oneness principle works through the science of impression, as taught by DK.

[2] I have never instructed anyone to do anything harmful let alone horrible either by my own voice or any other voice.

[3] The statement is hypocritical considering that you come here preaching your own message of from God which must be from an inner voice of some kind.

Reader: Politics, in any way or from any wing is part of the beast’s manipulation of humankind.

JJ: So Lincoln was in league with the Beast when he freed the slaves. So was Martin Luther king when he worked for civil rights.

Reader: “Politics, in any way or from any wing is part of the beast’s manipulation of humankind.”

JJ: Then explain why you accept DK when he writes the following:

“The work of the Manu is occupied with the science of divine government, with politics and law.”

“The divine Christ in the human heart can express itself in many different departments of human living-in politics, in the arts, in economic expression and in true social living, in science and in religion.”

“What this divine purpose may be the Christ Himself will reveal upon His arrival; the focal point of His activity will be dependent upon the medium used by Him to implement that purpose-known only to Him and to the senior members of the Hierarchy. Should politics be the medium through which He best can serve, that then will determine the locality of the focal point.” Externalisation of the Hierarchy, Page 274

DK seems to think that there is a good possibility that Christ will be a politician (or work with politics) when he comes. Who knows? He may even write a book on politics. Will you then condemn him as being spiritually inferior and in cahoots with the Beast?

The object in life is not to be on the side of the majority, but to escape finding oneself in the ranks of the insane. Marcus Aurelius Antoninus (121 AD – 180 AD)