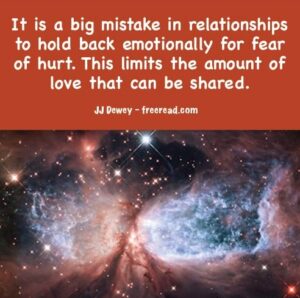 JJ: During the break a number of people asked me questions about the energy. Does anyone else have any questions on it? When you looked into the other people’s eyes did you see something similar in everyone’s eyes?

Audience: Even though there are thirty or forty people here, there is only one of us. So, I always saw myself in other people’s eyes.

JJ: That’s a good point. He said he always saw himself in other people’s eyes.

Audience: I saw fear in some, a sense of uncomfortableness in others. I saw awkwardness but I also saw the light.

JJ: Yea, you see hope, you see worries, you see concerns, you see love, you see desire to be accepted. You see a lot of things when you look in other people’s eyes. The reason you can see them is that they’ve been in you at one time or another.

Audience: It’s a little awkward at first. My first reaction was to run. It was really awkward at first but once I got comfortable and had a reason to keep going. To me, I could do this forever. When we look into each other’s’ eyes the moment was there for an actual soul connection. It was rushed at first but then we slowed down and looked into each other’s eyes for a while. While we were doing that it felt like Barbara’s spirit and my spirit and energy were connected. I didn’t notice that with everyone but with her I did. People who had the experience with Barbara know what this is really all about.

JJ: James let’s have you and Barbara do the exercise and see if you notice any lightening with her.

James: I felt a little bit of a kick there! (laughter)

JJ: I can see why. Did you see the way Barbara was looking at him? What was different in how she looked at him?

Audience: An observation I made. . .for those of you who have seen The Last Samurai. Remember when he is battling and the young boy teaches him that his mind was here and his mind was there then the point where there was no mind and he taps into that. That’s what she does. She meets your eyes. You can feel it. The last person is gone, the next person is gone, the next breath is gone. She went to that place that I strive for in my meditation practice. That’s why there is that connection. She’s in the no mind place.

JJ: What I noticed was that she seemed really focused. When we do this sort of thing there is a lot going on around us but she stayed really focused plus what you said too. That’s why these two guys felt sort of zapped by her.

Audience: When we connected, I felt an effect like she was affecting me in a way.

Audience: It seems to me, in my experience when I was looking into someone’s eyes and going through this experience, I noticed that I had to drop any barriers that I had to get anywhere. I’ve experienced a lot of judgmental attitudes or beliefs and it seems that if I was to look at somebody who had just negatively judged me or somehow negatively influenced me, the only way I could do that is to look past the personality, past the barriers and look at the soul in order to transfer any energy. I don’t think you can transfer any energy, even spiritual, through these barriers. That was my experience in looking at people and people looking at me it seeing that in watching other people. It seems that when they throw all barriers and are willing to give that love there is more energy transferred because of the willingness to transfer that.

JJ: For either spiritual and romantic love, to circulate, takes a dropping of the barriers. If your feelings are hurt you might actually keep the romantic love but to heck with the spiritual love. You might want it but have a problem with that. Or you could have a problem with both of them if your feelings are hurt. If your feelings are hurt you must communicate them and let them go so the energy can flow again. If you pay attention to any relationship you’ve had, whether it be with your parents, your boss, your wife or your best friend, you will notice that sometimes the energy is just flowing. Even with a macho thing like a football team. Sometimes the energy just flows between the team mates like a brotherhood. Then sometimes it doesn’t flow and they don’t play as well. In a relationship with a loved one, a romantic relationship, you can be particularly, keenly aware of the energy flowing.

If anything interferes with that energy flow you’ll notice it. The problem is that even though you may notice it, we will often be tempted to deny it. We come up with all sorts of excuses. “It would be silly of me to bring this up because he’ll think I’m jealous and one thing will lead to another. So I just won’t say anything and I’ll just pretend that everything is cool.” Then this denial leads to her giving less energy then he’s picking it up and soon the energy goes lower and lower with less and less circulation.

The key to a happy relationship, whether it be romantic or spiritual or a brotherhood, is to keep the energy in circulation. Someone asked me about single people. What’s the advantage of having a relationship if the single guy has 100% in him and that’s the best a married guy can hope for?

The advantage is that the relationship starts the energy moving. There are a lot of people who are single and who are content. Content is the word for the single person. That’s about the highest he can achieve, contentment. He contents himself with studies and his work but he’s never on fire.

Probably the best example is when you visit a single guy and open his refrigerator what do you see? A can of beer and a couple pieces of bread? Isn’t that pretty typical? Maybe a TV dinner. What do you see when you open a married guy’s refrigerator? It’s teeming with vegetables and good things to eat. The difference is that the married guy is in motion. The single guy keeping his energy within himself doesn’t even leave to buy groceries. He’s not motivated. But if you get the energies circulating between two people things begin to happen. Magical things begin to happen. He and she will both do things that they’ve never done before. But, of course, if in the relationship the energy is shared with the wrong people or not returned then things go downhill and it is worse than being single.

Audience: I still don’t quite understand the difference between romantic love and spiritual love I think it’s very important to see the pure love of Christ in other people. So, I want to have my spiritual love turned on. I want to have a smile on my face and share my love with others, even strangers in the grocery store but oftentimes that feeling that I’m trying to share, that spiritual love is mistaken and people think I’m trying to be sexual with them. So, am I doing something wrong? Are they doing something wrong?

JJ: That’s the way men are. If a woman gives us an inch we think, “Ah she likes me!”

Audience: Should I change that somehow? Am I responsible for that response?

JJ: You can control people’s reaction to you to a degree with your thinking. Tune into them and if it seems they are picking up too much then tune yourself down. If you pick up that they’re getting exactly what you intend then continue doing what you’re doing.

Do you ever meet someone and hope, “Boy, I hope he doesn’t want to be my best friend.” If you tune them out and don’t think about them you’ll probably never see them again. With other people you seem to like, they seem to keep popping up in your life. Energy does follow thought so it’s important that when you’re giving out energy of any kind, you follow it with your thought and your energy also follows your thought so you control that energy with your thought.

In a marriage relationship maybe you’re at work and for business purposes you need to have lunch with a good-looking person of the opposite sex. You might think, “I can control this so nothing would happen that would bother my wife.” So you don’t disturb her energy even if she’s thinking a little in illusion. You know you can control the situation. You don’t do anything to disturb the energy with your spouse. Many people may not understand their own limitations. Each one of us has our limitations. It’s like if each one of us in this room were to be tortured, we would all reach a point where we would do most anything. Everyone has their limitation somewhere up the road.

Even Christ, in the Garden of Gethsemane, pleaded to the Father, “Take this cup from me please.” He had reached His limitation. An Angel came and strengthened Him. We all have our limitations. Each us has to understand ourselves. As Shakespeare says, “Know thyself.” We need to know ourselves and know what our limitations are.