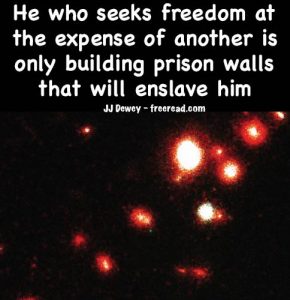 Received some good comments on this from various groups. A popular comment was that such measures should be accepted by the majority of the people.

This would be a step better than we have now where many laws and measures are passed that run contrary to the people’s will and do more harm than good. But even if we go by majority will the Principle of Freedom can be violated.

And how is that?

A strict majority will can violate what we may call the Little Red Hen Principle as well as the Principle of Freedom.

Most know the story of the little red hen where she finds a grain of wheat and asks for help from the other animals to plant, harvest, mill and eventually bake some bread. At each step the animals exclaim “Not I!” and refuse to help.

Finally, she asked, “Who will help me eat the bread?” To this they all exclaim, “I will!”

To this she tells them that she will not share because she did all the work so she gets to decide who gets the final product and she shares the bread with her chicks instead.

Now the recognized moral to the story is, “if any would not work, neither should he eat,” but the meaning goes deeper than that. The little red hen has power to distribute the bread as she sees fit because the bread was a result of her labor.

Most versions of the story have four animals involved – a pig, a cat, a frog and the hen. Let us supposed they had an orthodox version of democracy and the four voted on what to do with the finished product. Of course, the little red hen would vote to use the bread for herself and her chicks because she made the bread, but the other three would vote that it all be shared with them.

If this happened would the Principle of Freedom be violated?

Indeed it would for we should be free to have control over the results of our labors. One could even say that the three freeloading animals have devised a way to steal from the hen in their democratic system.

Now let us suppose that the farmer, who has authority over them all, comes along and decides he wants half the loaf for himself and then divides up the other half with the animals. He likes the cat the most and gives it the biggest and best piece. Then he divides the remainder with the rest of the animals according to how deserving he thinks they are. It turns out the little red hen gets the smallest piece because the farmer figures she is the most industrious and can easily make some more bread.

The first case illustrates a possible flaw in a pure democracy and the second a major flaw in our present system of government where the farmer represents big government as it exists today.

It is interesting that most can see the problem of unfairness in these two examples where the hen loses control over the fruit of her labors, but then when we switch to the real world and apply this to our current situation many just cannot see it.

There is much illusion that needs dispelling. An important one is the belief that all should have an equal vote.

We see through this illusion in the story where the three virtually steal from the one, but many cannot see it at all in real life.

In real life most believe it is fine for those who do not pay taxes to have power to vote to take more money from those who do.

How is this different from the three animals voting to tax the little red hen of her bread?

A huge chunk of our citizens believe it is fine for our government to take what it wants from those who have, and, after taking its share, to divide up the rest as it sees fit.

How is this different from the farmer dividing up the bread owned by the little red hen?

“Okay, wise guy,” says the skeptic. If we can’t be fair with a democracy how are we supposed to do it?

The answer is that a democracy where the will of the people prevail can work, but such democracy must be composed of similar people with interests in common.

To get the idea let us look on the nations as units. What would our people think if our leaders decided to have a vote between the United States, Russia, China and Iran as to how we are going to spend our revenues? That would indeed be a crazy form of democracy as they would vote to have us spend nothing on defense and give everything to their interests.

In this country almost half the people pay no federal taxes and a similar amount receive some type of assistance from the government. Many economists and thinkers have warned us that when those figures exceed 50% that it will be impossible to have responsible taxation and spending which will lead to a collapse.

We are headed toward a situation similar to that where the three animals could vote to take what they wanted from the little red hen.

What is creating the problem?

The will of the people is a good standard if the vote consist of those with similar involvement and interests.

In our case, the amount of taxation and sharing should be determined by those who are doing the work and paying the bill.

“But, says the skeptic, if we let that happened we wouldn’t have any tax revenue or sharing.”

I submit that is completely incorrect.

Those who have abundance are willing to be taxed and share as long as they feel it is fair. On the other hand, what is the human tendency of those who receive things for free with no labor required on their part? They usually just want more, have little desire to contribute and no empathy for the sacrifice of the producers.

What would be the difference in a democratic system where the actual taxpayers decide on how much they will share compared to everyone deciding when most are not paying taxes?

In the first case we would have much more responsible system of sharing and one that is more efficient with more sharing going to where it is needed rather than to the overseers.

In the second case we have a system that is headed to collapse where all will eventually suffer and none will be satisfied.

The skeptic replies, “This seems unfair as the poor and disadvantaged should be able to vote.”

And in most cases they would where they have equal participation, including many taxes other than federal. For instance, we all pay sales tax so we should all have an equal say on this. They should have equal say in laws that apply to everyone, but in the case of Federal taxation and sharing the Little Red Hen Principle should apply. Those who have to pay should be the ones to vote on how much should be required and those who do not have to pay should not be able to tell those who do how much they need to contribute.

Right now we are a long way from implementing a fair system that follows the Little Red Hen Principle as our Republic has flaws that prevents the will of the people from being accurately represented. Right now our situation is similar to the hen where the farmer decides the contribution and disbursement. We may have to have a complete collapse of the system before we see such a replacement happen. The best we can do at present is to teach correct principles as seeds that will grow and eventually mature.

In the meantime I have introduced a compromise democratic system in my book, Fixing America, that would take us a step in the right direction, so long as those receiving freebies from the government stays below 50%.