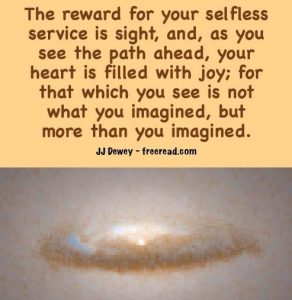 For the Love of Service

Looks like my teaching on self interest needs some clarification.

My point was that groups (and individuals within the groups) of many differing belief systems, from the most pure to extremely deluded ones, such as Nazis types, do serve for the sake of service to God or an ideal without examining and discovering their real motive. I was speaking generically about the various groups without placing anyone in the group within them.

It’s a little like giving the warning that one must understand who it is that he is voting for. You could be voting for an Abraham Lincoln, but you could also be voting for a Hitler. If the voter does not understand why he is making his choice and what the person stands for and the benefit (or grief) he may receive then he is playing Russian Roulette.

The same goes for service. If we do not understand who and what we serve and the benefit or grief that may come from it then the value of that service will not be known. It could help the world or it could be a destructive force, even though there is great desire of the person to do good through the service.

For example just before World War II there were many peace activists in England and the U.S. putting great pressure on these countries to not go to war and stand up against Hitler. Their motives were good but they were actively serving a cause which, if successful, would have allowed Hitler to conquer the world and today all who would not embrace Nazism would be killed. It would have been 1000 years before the Brothers of Light would have had another opportunity to drive them back.

When those deluded peace activists, at that period, died and received their life review and were shown what would have happened if they were successful do you think they would feel joy? No indeed. They would be thanking God they failed.

From my experience I have found that the highest joy from service comes from an understanding of the domino effect of that service and where it will lead. In addition to this a fullness of joy comes when one receives soul confirmation that the end product of the service is good and in alignment with the will of God.

One may very well be applying their service to a cause which will be of great benefit to the world, but I would suggest that unless we all search our motives and discover our true benefit from the service, that the possibility of self deception is there – like the voter casting his vote because it is the right thing to do, but knowing not who he is placing in power.

A reader mentioned that the motto of the Three Musketeers was a good guide:

“All for one and one for all.

Then Mark came up with an ingenious change:

A couple readers mentioned that their motive for service is love for God.

Actually to say one is motivated by the love of God is very close to being motivated by joy, as I mentioned and evidenced in the following scripture:

“And I answered him, saying: Yea, it is the love of God, which sheddeth itself abroad in the hearts of the children of men; wherefore, it is the most desirable above all things. “And he spake unto me, saying: Yea, and the most joyous to the soul. I Nephi 11 22-23

The love of God is “the most joyous to the soul.” If the love of God brought us torment or pain, then we would not be very motivated by it would we? But because the love of God and all spiritual love brings joy then those who have experienced feeling it will have a strong desire to serve higher purpose so a fullness of joy can be obtained.

This helps us understand Hebrews 12:2 which tells us that Jesus was motivated by the joy he would obtain.

It is interesting to take a look at the average spiritual person who loves God as good as the best of them and see how he dispenses his service.

On the average case he will spend 40-50 hours a week at work serving others for money to make a living as the prime motive.

Because they are his spouse and his kids and they provide him with greater benefit than the more needy.

He may attend a church or spiritual service several hours a week, but attending a meeting of itself is not service. He is motivated by what the service offers him or his soul.

He may serve his own desires for twenty or more hours by preparing and eating meals, watching TV, surfing the Internet, reading books or just relaxing at some hobby.

He may spend another 10-20 hours in fairly neutral activity such as driving, walking commuting, bathing, dressing, shopping or nothing much at all. These activities are roughly necessary to serving bodily needs.

If he is lucky he may have a few hours left for altruistic service. He may give of his time to teach, to feed the poor, to help a friend in need, to serve his party or church etc.

In this service he is not serving an individual being (God) directly but is serving God through helping his fellow men.

It is interesting to look over our lives at those who have served us and ask ourselves what was the motive of those who helped us the most . Did they seem to be very spiritual people and motivated to help you because they loved God, or did they seem to be people that didn’t seem to be particularly big on God, but just naturally nice people? This would be an interesting question for the group to comment on.

As for me, as I reflect on those who helped me when I really needed it, a good deal of that help came from people who were not particularly religious, or spiritual in the normal sense. I’m not sure if there is an incident where I was helped by a person who was motivated purely for his love for God. I have noticed that atheists are often as helpful as those who see themselves as dedicated to God. The most selfless service anyone has rendered me has been my mother. During my early life she was not religious and never went to church. Later she became very religious and dedicated to God. Even so, her willingness to serve me was pretty consistent throughout.

Another interesting thing to note is that that the strongest attempts to do me harm in my life has been from individuals who have had a strong belief they are serving God. I’ve never had much problem from non believers.

My summary: The greatest servants of humanity are those who have an inner contact with the soul and realize that helping others is like helping ourselves and receive joyousness from the act. Many of these people are not God conscious by the normal definition but are God conscious from a higher point of view.

Several have made the comment that when they serve God they do it with no thought of reward.

This statement seems to infer that when we work for money, praise or some other reward that the end product is in our minds as we work, but is it?

I put in many hours each week keeping my business together. One of the products we make is signs and as I was spending a number of hours on a project, I thought to myself these thoughts?

What is the reason that I am motivated to do this work instead of a thousand other things I could be doing?

The answer was to make the needed money to keep body and soul together as well as publish the next book.

Then I thought to myself this: “Throughout all the day I have worked for money have I thought of money even one time?”

Answer: No. I had not thought of money as a motive even once today nor did I yesterday or the day before.

What did I think about?

Answer: I thought about getting my work done and doing a good service and job for my customer.

Question: If I am motivated to do the work for money then why do I not think about money?

Answer: The course of the business was set some time ago and now I know that if I follow procedure that the money will just come in. Rarely do I even think about it.

Now let us switch to my motive for following the will of God in the highest service I know.

What is the reason that I am motivated to offer freely given service instead of a thousand other things I could be doing to get me ahead?

The answer is that I have thought my priorities through and have concluded that the greatest joy comes from service in alignment with the will of God and the will of God always includes the helping of our friends upon the path.

This said, when was the last time I was burning the midnight oil in service that I thought something like this to myself.

The answer is that I do not think I have ever thought such a thing while I have been in the service of my friends.

What did I think about?

Answer: My thoughts were similar to the service I render in my business. I thought about doing a good job so the recipient would find the service useful.

Question: If I am motivated to do the work for joy then why do I not think about joy ass a reward?

Answer: Again, the answer is similar to the one I gave for the business. The course of freely given service along with the benefits was seen and decided some time ago and there is no need to think about it. A lot of the joy and satisfaction in service whether it be through doing a good job in our normal work or giving to an altruistic purpose is the journey. Even as I write to you right now in service I find that I enjoy it. Then when I read your response I find I enjoy this also.

When I perform my business service well I find that money just comes in, as well as the enjoyment of a job well done.

Then wen I perform a more spiritual service I correspondingly also find that joy and enJOYment just naturally follows without having to think about it.

So, in summary, let us ask. If we are serving without thinking of the positive aspect of enjoyment or joy that comes from service, does this mean that joy is not a factor???

To the contrary, joy is indeed a factor. As proof just try to find one person who attempts to give service to God, but does not enjoy the service, or has any prospect for joy. I do not think you can find one. I know that I do not know of one.

Conclusion: Even though it may seem that many are serving just for the sake of service (because the reward is not in their mind as they work) there was indeed a moment of decision behind this work wherein it was concluded that following the will of God would be the most rewarding path. We always choose the path which will bring s the greatest possible reward.