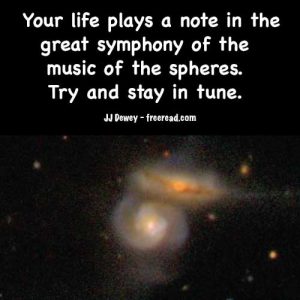 Feeding The Fourth And Fifth

It is interesting to contemplate on the idea that the higher kingdoms feed on the lower. It is obvious that the vegetable feeds on the mineral, the animals on the vegetable and the humans the animals. How this plays out further up the scale is not so obvious, but indeed we do have the words of a master who says, “the fifth feeds on the fourth.” In other words, the spiritual hierarchy, or the inhabitants of the kingdom of God derive nourishment from the human kingdom.

It is indeed true that all the inhabitants of the fifth kingdom were once in the fourth and therefore would not exist without us, but that doesn’t give us the full answer. The question is how they presently obtain nourishment from us similarly to how we do so from animals and vegetables.

Correspondences are rarely exact so I do not see the masters turning us into Soylent Green and eating us in a feast. Neither do I see the higher residents of Shamballa dining on the masters. Instead of being too literal we must look at the principle involved and that is nourishment of the higher by the lower. Nourishment can be obtained in a number of ways. Humans, for instance, obtain a certain amount of nourishment trough invisible prana just by being out in the sun. Then we obtain nourishment that feeds our emotional selves through friendships, romance as well as associations with our pets.

The members of the fifth kingdom have worked tirelessly for thousands of years to assist us humans so there has to be something in it for them. For one thing we know the higher must help the lower so they can earn the right to receive help from one higher still.

But beyond that any teacher or helper receives some immediate benefit when the assistance is received and appreciated.

As we read on in DK’s words we see another hint. The rule in question says: “Let then the group—merged in the fifth—be nourished by the sixth and seventh.”

The goal of a group of initiates then is to merge with the fifth. In other words, the destiny of advanced humans is to become as members of the kingdom of God while still being on earth in the human kingdom. When a group is able to do this then they will “be nourished by the sixth and seventh.”

Thus, when we create group consciousness on earth as it is in heaven the door is open to something even higher, the two kingdoms higher than the spiritual hierarchy. Humans and masters sharing consciousness will then receive nourishment from the kingdom where resides the Ancient of Days – Shamballa.

Because the Hierarchy depends on humans for this merging to bring down extra spiritual energies we can say that the fifth feeds on the fourth.

Keep in mind that this is just one answer for there is often more than one interpretation to writings received from a spiritual source.

1 thought on “Feeding The Fourth And Fifth”