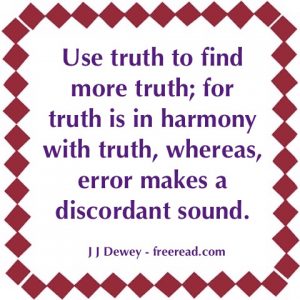 Well here it is January 3, 2002 and still no earthquake as predicted for Jan 1 by the previously discussed wannabe prophet.

There are two keys for being a good prophet.

(1) Make many predictions clouded in obscurity. Since even a stopped clock is right twice a day some predictions will seem to be close. Take the close ones and promote them and ignore the failures.

(2) Take what everyone else is predicting and say the opposite. I have done this quite a few times (including this Jan 1 prediction) and have been right every time.

The reason prophecy is so difficult is that most events are not and can not be mapped out in advance. The only ones that are would be those that involve a decision made by one who has power to make the event happen.

The Ancient of Days makes a handful of prime decisions like this and if one of them were revealed to us we could then depend on the event materializing. But even some of His decisions may not have a fixed time, but be subject to the progress of humanity.

Back in 1978 when I wrote Eternal Lives almost every student of the scriptures was predicting the coming of Christ before the year 2000. You’ll note that I went against the grain and predicted that he would not come among us by this date or even a few years after. This type of knowledge only comes when purpose is involved and rarely concerns mundane events.

I was given no foreknowledge, for example of Sept 11, for there would have been no purpose, for it other than to brag about what a good prophet I was.

Generally a true knowledge of the future will be seen along lines of developing principles and cycles. Rarely will an individual be given dates of specific future events as this could interfere with free will.

The Question: Why are they (Rays of Attribute) under the Third aspect and not the Second or First? This is a difficult question and if you do not know the answer move on to the next.

The Fourth Ray is called the Ray of Harmony Through Conflict.

Meditate of this name “Harmony Through Conflict” and tells us the meaning that comes to you and what the influence of this Ray will be. Is conflict sometimes desirable? How can harmony come out of conflict?

Actually we are on our own on this one for DK has been very silent about it. This is one thing we try to do here is go beyond what has been written and stretch our minds and intuition a bit.

Here is my thinking on the subject.

The Rays of attribute have to do with characteristics which have manifestation and motion that extends down to the physical plane.

We must keep in mind that in the world of the Monad (spirit) that the rays of attribute (4, 5, 6 & 7) do not even exist. There only the Trinity of Rays exists as we understand them.

Thus we have Ray One (Spirit), Ray Three (Matter) and the interplay, Ray Two (Soul). In this creation the attributes must manifest under Ray Three because they are linked directly to matter. Rays One and Two are formless.

Now Ray One may have its own attributes which manifest in higher worlds, but any knowledge of this has not been revealed. These would be spiritual attributes that we could not presently comprehend for they deal with formlessness.

There is a true harmony and a false harmony. True harmony manifests when all the aspects of a problem are examined in honesty. When this happens a point of friction is seen and revealed. This produces conflict and is unavoidable.

When the conflict is revealed and faced friction does its work and just as a rough rock becomes polished and smooth with friction, even so does harmony manifest through conflict.

So what is false harmony?

(1) The person sees the friction but suppresses and ignores it. By pretending the friction does not exist he has an illusionary harmony for a short period, but no peace. Peace cannot come to the soul who knows internally that an enemy lies at the door, an enemy which must be faced.

(2) The person does not see the point of friction or conflict because he fears and because he fears he is afraid to look. He therefore has the harmony and peace of the ostrich with his head in the sand. During this period of false harmony he is in constant fear that he will be struck in the darkness by a hidden enemy.

When anyone speaks of conflict or solution the mislead entity only pushes his head further into the darkness of sand telling himself that the darkness is peace.

The purpose of the Fourth Ray is to force true vision of the battleground before our eyes. While the fourth Ray does its work the battle becomes unavoidable and like the disciple Arjuna he learns that he must fight and win many battles. The victory comes to him who has the door of soul open wide.

“No glamour, no illusion can long hold the man who has set himself the task of treading the razor-edged Path which leads through the wilderness, through the thick-set forest, through the deep waters of sorrow and distress, through the valley of sacrifice and over the mountains of vision to the gate of Deliverance. He may travel sometimes in the dark (and the illusion of darkness is very real); he may travel sometimes in a light so dazzling and bewildering that he can scarcely see the way ahead; he may know what it is to falter on the Path, and to drop under the fatigue of service and of strife; he may be temporarily sidetracked and wander down the by-paths of ambition, of self-interest and of material enchantment, but the lapse will be but brief. Nothing in heaven or hell, on earth or elsewhere can prevent the progress of the man who has awakened to the illusion, who has glimpsed the reality beyond the glamour of the astral plane, and who has heard, even if only once, the clarion call of his own soul.” A Treatise on White Magic, Pg 223

Indeed, when that clarion call of the soul comes, many battles will loom ahead, but if the disciple fears not, he will proceed and find the peace of God that is only known by he who treads the path of fire.