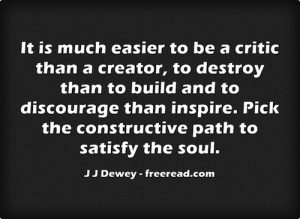 A critic lumps Alice A. Bailey and H. P. Blavatsky writings together under one banner. Like many others, he assumes that if H. P. Blavatsky makes a statement or quote of a doctrine that Bailey follows right along in the same belief.

Such is not the case.

To understand either Blavatsky or Bailey and to be fair to both one must examine their writings as separate units and judge them accordingly.

The big difference in their writings is this.

Blavatsky wrote in her own words and her books were not dictated by a Master. She used an amazing number of quotes from writers ancient and modern (to her). The main assistance she received from the masters was the supplying her with documents from which many of her quotes were derived. It is said she would look at what apparently was a blank wall and see an original document from which she would quote.

The main point of her writings (which is missed by many) was to show the world that the ancients were not so backward as many at the time believed and to illustrate to the world what the beliefs of these ancients were.

Her work stimulated the world for good. Because of her there is much more interest today in the knowledge to be gleamed from ancient history which has not been covered by orthodoxy, or even HPB, such as:

(1) Pyramids as a whole, especially the Great Pyramid.

(2) Ancient teachings outside orthodox Christianity and Judaism such as Gnosticism, Buddhism, Hinduism, ancient American Indians such as Hopis and Mayans etc.

Much of what has been investigated was not mentioned in depth by her, but inspired by her. In other words, she directed the attention of humanity to look into our past and discover what is hidden there which has been covered up or overlooked by the authorities of the day.

Because she relied so heavily on quotes and often without commenting on whether they fit in her own belief system it is difficult to take a few paragraphs from her writings and exclaim “See. This is what she believed and Alice A. Bailey must have believed the same thing.”

To do this is to lay the foundation for much illusion for often Blavatsky would quote from one source at one time and then from another later that would contradict the first.

Her main works “The Secret Doctrine” and “Isis Unveiled” were meant to stimulate thought more than to establish a black and white dogma.

To understand Blavatsky one must contemplate her favorite quote which was this:

“There is no religion higher than truth.”

She sought truth no matter where it led and quoted presentations of truth from writers of the past no matter how controversial they may have been.

This does not mean that all her quotes and personal thoughts are true. One must read her by the light of the soul just as we must any other author.

When we similarly examine the writings of Alice A. Bailey we cannot therefore, start with the premise that all the writings of Blavatsky are part of her foundation. While it is true that Bailey often quoted Blavatsky her work must be judged on it’s own. One of the reasons for this is the great difference of direction between the two.

Blavatsky concentrated on the past, shedding light on the intelligence buried in history.

Alice A. Bailey concentrated on the present and gave teachings that would elevate our current consciousness. A keynote of her work is expressed in this mantra from DK:

“Let pain bring due reward of light and love. Let the soul control the outer form,

And life, and all events,

And bring to light the Love

That underlies the happenings of the time.”

Her basic work was not from her own thoughts and writings as was the case with H. P. Blavatsky but dictations directly from the mind of a Master of Wisdom often directed at understanding “the Love that underlies the happenings of the time.”

The next revelation concerns the future as the main point of attention. That is, these writings will deal with principles, ideas and restoration of mysteries which will lay the foundation for the coming age.

There will be several teachers involved in this revelation. One of my main missions is to present new principles and simplify old ones with clarity so they can be registered by the souls of men and lay the foundation for the dispelling of illusion which has so plagued the work in the past.

Once a principle has been understood and registered by the soul, the seeker can no longer be deceived by false teachers on the matter and is one step closer to being ready to learn at the feet of the Master, the Christ.

That said let us consider the best way to respond to our critic’s concern that H. P. Blavatsky and Alice A. Bailey are agents of evil rather than the light. He and others who make such assumptions have usually come across a quote or two they attribute to the dark side and then advocate a complete rejection of all they wrote.

Should we instead search for words of light that are 100% true so we can relax, and then find works of darkness that must be also completely rejected?

The problem is that there is no such thing as any work of light that can be trusted 100% nor is the a work of darkness that is to be totally rejected.

“How about the words of Jesus?” you say?

Well, how about them? Consider this quote:

If Jesus actually said this and realized how much these words would be misused that he may not have said them. This quote was mouthed by those who have instigated dozens of wars resulting in untold suffering during the last 2000 years.

Similarly, many cite the act of Jesus casting the money changers out of the temple as justification to lose their temper and mistreat their fellow men.

The point is there are no safe teachings out there that can be infallibly understood and applied. Therefore, instead of answering the critic with a black and white counter I will answer with a principle. If we understand the principle of discerning good and evil then it matters not where the writer is coming from. One can examined the teachings in relation to his own soul and be guided by this and not a black and white rejection or acceptance.

How do we become as one of the gods and obtain the power to discern good from evil? How can we read the words of a teacher and come away knowing we have discerned that which is good and that which is evil?

In other words, what is the principle behind the discernment of good and evil?

Please, this is not the time to discuss whether or not good and evil exist or how to escape duality.

Let me throw in another question to stimulate interest in discerning topic.

Let us suppose you discovered three things as definite truth.

(1) That Jesus was a fictional character.

(2) That Alice A. Bailey made up the character of Djwhal Khul and wrote all the books using her own wisdom.

(3) That I was in cahoots with the devil.

If you discovered these three things to be true how would it change that which you have valued as true coming from the New Testament, the Writings of Alice A. Bailey and my teachings to you?

“May I fulfill my part in the one Work through self-forgetfulness, harmlessness and right speech.” DK