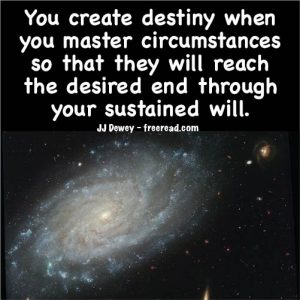 That there is no life in the universe, not even God, who knows every detail that will unfold in the future. The big picture may be seen, but not the details.

If there be even one failed prophesy given from God then my point is proven.

A reader pointed out that the Bible is not translated perfectly, but you would have to say the whole story of Jonah is a fabrication to disprove my point.

I only took one example from the Bible and all the rest are from Mormon scriptures which I assume LDS readers believe. Two of them were said to be Christ himself speaking and making predictions which did not come true.

No one explained why, if God knows everything in the future, that these prophesies did not come true.

I was admonished to let not tainted scriptures be my authority (which they are not) and then the reader turned around and used them on me as if they were infallible. Seems odd.

When debating with another I use what I consider to be their authority.

I might add here that even with several failed predictions that Joseph Smith is still one of the most accurate prophets of all time for he made many fairly stunning ones that did materialize.

The question is – why would one believe that God knows every detail of the future – or even more importantly – why would he want to know? If I do not want to know something I will not find it out and will not know it. Why then would, a superior being want to clutter up his mind with details that would even bore inferior beings such as ourselves?

If God knows everything in the future and can reveal it to a spokesman then why has every spokesman that claims to be for God (of which we have a detailed record) made inaccurate prophesies?

One has accused me of dishonesty in approach, but I have never in my life used dishonesty to save face and do not plan to. Every post I have ever made to this group has been with as much honesty as is in my power to give. Why would any judge me otherwise?

A reader speaks of authority. My only authority is the Holy Spirit and it does indeed witness to me that these principles I teach on foreknowledge is true.

Using the logic of the mind I will present another point.

If God knows everything in detail that will ever happen this means that neither God or humanity have free will. To have free will one must make decisions. To make a decision one must be faced with two paths, or choices. To be faced with such a choice one has to NOT KNOW which path he will take until the decision is made.

God can only make a decision when he encounters a point in the future that he does not know.

Without some uncertainty there is no decision, no free will and hence no life or reason to live or even exist.

Question; How is exploring the question of the foreknowledge of God going to benefit or change one’s life either spiritually or materially?

Some truths and mysteries are more interesting than others. Some find this subject very interesting and some do not, just like any other topic.

The question you ask, however, is one that is often asked inside the orthodox churches and is used as an anchor to keep the flock happy with what they have rather than seeking higher knowledge.

“I don’t need to know what the meaning of this scripture is for it does not effect my salvation.”

“I don’t need to explore reincarnation because I have faith in the plan of God whatever it is.”

“I don’t need technology because the Bible doesn’t endorse it.”

“I don’t need to know what happens after death because I have faith I am going to live with God.”

“Do not delve into the mysteries because they can lead you astray.”

Believers come up with all types of excuses to not explore higher knowledge thinking it will serve no use, but does it.

Joseph Smith made an interesting statement: “A man is saved no faster than he gains knowledge.” And “Man cannot be saved in ignorance.”

True enlightenment consists in seeing one or more of the pictures that make up the Great Plan. Each picture is like a jigsaw puzzle with many pieces. Each truth is a piece. Some pieces do not look important until it is linked up to other pieces and then just one insignificant piece can reveal the whole picture or at least an important part.

The principle behind the knowledge of God is an important truth that will reveal much light when joined with other pieces of knowledge.

I personally have found this knowledge delicious to the taste and a door that has brought in much light to my mind that has increased my power of vision in all areas of seeing.

Comment: I am not saying this knowledge is not relevant. I just don’t know WHY you think it is relevant enough to debate over it, and I am simply asking WHY. This is an interesting exercise to ask a question to this group and see how long it takes to actually get an answer.

Your exact question was “how is knowing this answer (about God’s foreknowledge) going to benefit or change one’s life either spiritually or materially?”

In my last post I attempted to answer this for you. Now you are asking a different question which is:

“I just don’t know WHY you think it is relevant enough to debate over it, and I am simply asking WHY.”

The answer: What makes a subject relevant is if it is interesting to the members of the group. I think many find this an interesting subject. In fact it is probably one of the few interesting topics that is discussed in orthodox religion.

Here is an interesting quote:

“Everybody puts into his words the “content of reality” he is able to grasp on his level, in his circumstances and opportunities to have experiences. All too often people talk at cross purposes, and misunderstandings are inevitable. This appears best when you hear people reporting what others have said. They turn it into something different from what the original speaker meant. When something you have said is reported back to you, you will not recognize it and you may honestly assert that you have not said it. It is another matter that many people do not know what they have said, do not mean what they are saying, and then are indignant when it is reported back to them. It is frequently seen that people say one thing, mean another” Henry Laurency

Question: Hey is this guy talking about the Bible?

This quote is from Henry Laurency and he does not seem to be talking about the Bible. A reader turned me on to him a while back and I have been reading him and using some of his material and quoting him some. He was a student of DK and some say he had contact with the Hierarchy.

He has some good insights, but still a long way to go to match DK.