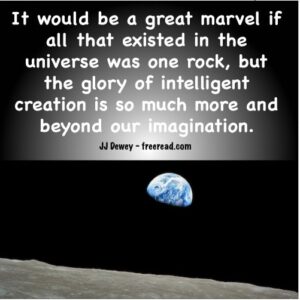 Question: Since something cannot come from nothing. How does anything exist?

JJ: Every time I look up at the stars in the sky, I inwardly exclaim to myself that the greatest miracle of all is that anything exists.

It would be fantastic enough if there were just one rock in existence in all the universe, but to think that there are star systems and an uncountable number of galaxies as well as invisible worlds teaming with life and energy boggles the mind indeed.

Here are some basic statements.

[2] We must ask ourselves what exists? That which is known to exist is form, time, space, energy consciousness, intelligence and life. There may, of course, be other items of existence beyond our realization.

[3] That which exists either had to come from something or nothing.

[4] Since something cannot come from nothing then all that exists came from something.

[5] Because something cannot come from nothing this means that nothing has never been and existence has always been and is eternal.

[6] That which exists changes in form, state and location but the source of existence always continues to be.

[7] Existence cannot be without creation.

[8] This means that the creative process is eternal.

[9] Creation takes place through cause and effect.

[10] This means that cause and effect is eternal and is behind all things.

[12] The eternal source of cause and effect just IS. For this we should be thankful, for without it we could not BE or BECOME.

Question: Wouldn’t evolution as a principle of truth not exist as a progression towards something that is not yet present, achieved, or manifested.

Just as existence is self-evident because our consciousness proves it, so is evolution. We experience ourselves evolving, creating and changing. There is no denying this unless we deny reality and existence itself.

Question Are you not teaching that something is created from nothing?

JJ I am not creating this post out of nothing. There is form, energy and intelligence involved as well as hardware.

Why say that evolution would mean we create something from nothing? Saying this does not make it true.

Question: Isn’t everything here in the present right now?

JJ: This may be a fun mind twister, but my post I am writing is not here at this moment 2:30 AM June 3, 2006. Because it is not here it means you are incorrect. It’s as simple as that. Neither is the next universe here yet. Neither is peace on earth here yet. It all has to be evolved. I can decide at any time to not evolve this post.

Existence can only be if there is cause and effect and cause and effect produce evolution. The only thing that does not change in time and space is change. Change is eternal. It has always been and will always be. There could be no existence without it. Without it there would be nothing, or NO THING.

Question: Aren’t your teachings comparable to the paradox of God creating a rock so heavy He cannot lift it?

The truth is that it is a silly question that bears no fruit in asking to begin with.

There are illusionary paradoxes and then there are true paradoxes.

An illusionary paradox is one that contradicts only because we lack understanding, or pieces to the puzzle.

For instance, “life is one, yet many” is an illusionary paradox. When the principle is understood there is no paradox at all.

The example of God creating a rock so heavy he cannot lift it is a true paradox based on the assumption that God is all powerful.

A true paradox has no solution except to reveal that the statement itself is based on illusion. The illusion is this. God is not all-powerful in the worlds of time and space as taught by the religions. He is all-powerful through law, but He cannot violate principle or law. The reason for this is that God did not create principles and laws, but principles and laws merely manifest during creation and all life including God has to apply them to produce desired ends.

To say that tomorrow is here, yet in our experience tomorrow is not here because I am in today is a nonsensical paradox with no solution except to reveal that the premise is not correct.

Question: Couldn’t we travel to the past or future by altering the flow of our consciousness?

The fact that something will happen does not mean it has happened. That’s like saying pigs will fly someday so they can fly today.

Question: Doesn’t it violate the law of cause and effect to claim the future is not set?

JJ: I don’t know where you get such an idea or the reasoning behind it.

If the future is set then there is no power of decision for there would be no decisions to be made.

If there are no decisions then there is no life for the power of decision is the principle behind life.

If there is no life then you do not exist and I am not reading your any posts or writing this, neither is anyone deciding to read in the future.

Perhaps those who believe the future is set can prove it by picking some winning lottery numbers or to give us the President’s next speech word for word in advance. I don’t think so. No one in history has been able to produce a speech word for word before it is given because it cannot be done. It cannot be done because we are decision and this puts many elements of the future in a state of flux. The only thing that is not in flux are those things which have already been decided.

Again I challenge you. If the future is already created look at it and give me my tomorrows post today, word for word. Even the masters can only predict details with about 50% accuracy. Because this cannot be done it basically proves you are not correct.

Perception does not create the future. Decision does.

To say that my future posts exist before they do exist is to say that black is white and orange is yellow.

In our reality the past, present and future are three different things and nothing in reality contradicts this. To argue that in some other reality things are different is like saying in another reality God can create a rock so heavy he cannot lift it. Such speculation is of no use to us where we are in the present.

Decision creates cause and effect, which creates evolution. Thought and decision, and cause and effect are comparable to the chicken and the egg, except they both have always been.

Time is created by change, but not all change creates time as we know it. The realities in the higher worlds are so different from our own that it does little good to discuss them. When climbing a ladder, you must go one step at a time. We must apply reasoning where we are, not where we are not, if we want to get to the higher steps.