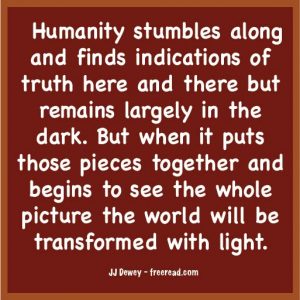 Comments on Abortion and Divorce

A reader asks by what authority it is from which I write.

I do not need any authority to say anything I want. I can just type on this little keyboard to my hearts content. The reader can use the authority of the soul to discover the truth or error of anything I say.

The reader mentions the signs of life in the fetus and seems to think that conflicts with something I said.

I have taken people back to the womb and even back to the moment of conception and believe me the intelligence and awareness is not as sparkling as you present. Memories and impressions are recorded from the time of conception, but full awareness is not there. The soul is loosely linked to the body and any really intelligent communication would come from that source, but that would not be the norm unless a person is very sensitive to the soul. All one has to do to realize that the soul gradually takes command of the body is to look back on your own life. Most of us have no memories of before the age of four because there is no self awareness. Our consciousness goes through, for about four years, one similar to the animal kingdom where individualization has not taken place.

I can remember my consciousness from the ages of 4-8 and I know from memory that my soul was more firmly anchored at 8 than it was at 4.

I have taken many people back to the early ages up to the time of birth and it is obvious from their accounts that their self consciousness was not firmly anchored at that time, even though full memory is recorded from the time of conception.

Interesting slant on the abortion scripture from a reader. The way the scripture is worded the (Exodus 21:22-23) (hurt unto death) could apply to either the mother or the unborn child. The scripture does tell us though that the mother definitely suffered hurt.

Actually this circumstance does not correspond very closely to abortion as it is today for even the most liberal abortion advocates would want to prosecute one who would strike a pregnant woman so she would lose her child.

By the way, many of the Bibles today that claim to be an accurate or close to literal translation are far from such. In your quote, for instance, the word “husband” is used and neither the word husband or wife occurs anywhere in the Old Testament.

The word “husband” here comes from the Hebrew BA’AL which literally means “Master” or “Possessor.” Few Bibles translate this the way the Hebrews used it for fear of offending the flock. But among the Hebrews the man was the Master of his household. Let me repeat for the new ones that I believe the most correct translation to be the Concordant Bible.

We have the same problem in our society with divorce as we do with abortion. The masses gather on the extreme views on one side or the other instead of looking at both sides in the circumstance and making an informed decision.

It is interesting that many who are anti divorce no matter what will use the following scripture as justification for their view:

“But I say unto you, That whosoever shall put away his wife, saving for the cause of fornication, causeth her to commit adultery: and whosoever shall marry her that is divorced committeth adultery”. (Matt. 5:32)

Here we have a scripture that has been greatly misunderstood and has caused much trouble in the world. Many religions have forbidden divorce because of these words of Jesus.

Notice that Jesus said that the only justifiable cause of divorce is “fornication”. The prevalent belief among Christians is that fornication is sex between two unmarried persons or between two married people not married to each other. But here Jesus uses fornication as an act between married couples. Therefore, the meaning intended by Jesus is not the one attributed to the word by people of today.

Actually, fornication may not even involve sex, for in the context it is used throughout the Bible, it means “to be alienated from” or “to remove one’s heart from”.

It is t his way with people. If their energies are not correctly matched and balanced, they commit fornication and become alienated and should get a divorce.

On the other hand, if the wife’s heart is with her husband and the husband divorces a wife who is committed to him, he “causeth her to commit adultery”. In other words, he causes her heart to forcibly seek someone else who may be at a wrong point of evolution. “And whosoever shall marry her that is divorced (wrongfully divorced) committeth adultery”. If a man marries a woman whose heart is still with her original husband, there is produced an imbalance of energy and this is what true adultery and fornication are.

Thus we see that the words of Jesus that have been used to cause much pain in prolonging relationships that should have never been – actually point toward the common sense that humanity has adopted in modern times.

On the other hand, when one divorces frivolously, on a whim, or because of betrayal with another person definite harm can come. It is generally recognized that a committed couple, especially with children should do everything in their power to rekindle their love and live together in peace.

My parents divorced when I was twelve. This was a painful experience for us all but a necessary one. I’m sure my sweet mother would have been long dead by now if she would have stayed with my dad – for life would have been very difficult for her. As it was she quit smoking and drinking, got a job, became self-sufficient and has helped and inspired many people.