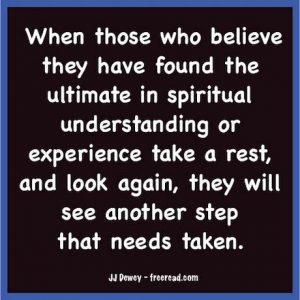 A reader quotes some of my teachings on divine possession and quotes this scripture.

‘And I will pray the Father, and he shall give you another Comforter, that he may abide with you forever; Even the Spirit of truth; whom the world cannot receive, because it seeth him not, neither knoweth him: but ye know him; for he dwelleth with you, and shall be IN you.’ (John 14: 16-17)

Question: The scripture says “he may abide with you forever”, but in the article you said his mental body will dwell in the body of a disciple for a period of time. So, which is it? Forever, or for a period of time? You mention several temporary overshadowings, and even the overshadowing of Jesus by the Christ for only three years. Can a master overshadow more than one person at once? If not, and if it’s going to be “forever”, how is this going to work.

JJ: The scripture concerning the Second Comforter has a dual meaning. Joseph Smith was correct when he said it was Christ communing with the disciple and sometimes abiding “in” him, but it is more than this. This Second Comforter is also related to the Christ principle. Paul expressed this when he said:

“Let this mind be in you, which was also in Christ Jesus: Who, being in the form of God, thought it not robbery to be equal with God.” Phil 2:5-6

An overshadowing by Christ is a temporary thing, but the link established causes “this mind be in you, which was also in Christ Jesus.” This is a permanent link to the Oneness Principle causing the mind of Christ to be with the disciple forever.

A more specific scripture referring to the divine possession is: “Behold, I stand at the door, and knock: if any man hear my voice, and open the door, I will come IN to him, and will sup with him, and he with me.” Rev 3:20

JJ: If the astral and mental bodies were not linked to the physical the we would not be alive. If we want to interact in the physical and be alive here then we must accept the package necessary for life.

The same goes for a Master. One like the Christ has the ability to create a temporary physical body when necessary, called, in the East, a Mayavirupa, but when working with general humanity the Hierarchy prefers to work directly through disciples. This is safer and more effective in the long run.

If a master wishes to work with humanity through a disciple then he must follow certain laws just as you or I do. They work with most disciples through the science of impression, by stimulating the mind of a disciple to see certain principles or ideas.

When using impression or overshadowing the Master can work with more than one disciple, but in the case of a divine possession he may be limited to the one physical body.

Question: At the baptism of Jesus, when John the Baptist witnessed the Christ descend upon Jesus and overshadow him, he also heard a voice from heaven declare: “This is my beloved son.” If the Christ had already entered Jesus, who was the voice, and to whom was the heavenly voice referring?

JJ: This was the Ancient of Days, the Father of humanity. DK also confirms this. Christ, however is also a Father in relation to Jesus. This is why he is called “the Father and the Son.”

The reader quotes: “Believest thou not that I am in the Father, and the Father in me? the words that I speak unto you I speak not of myself: but the Father that dwelleth in me, he doeth the works.” John 14:10

JJ: Both the disciple and the Master have to adjust to each other’s vibration and consciousness and blend and merge. This is a major task as evidenced by the fact that right after Christ came into Jesus that he went into the wilderness for forty days. The reason for this is that it takes about 40 days for both entities to adjust. After the adjustment the disciple shares the consciousness of the Master as if they are one entity. He is in the Master and the Master is in him.

After the adjustment is made the Master can leave at any time his full attention is required elsewhere, but a significant link would remain.

Question: I am having trouble with the distinction between temporary overshadowings and permenant overshadowings. Revelations seems to imply permanence. i.e “am set down with my Father in his throne”.

JJ: There is no such thing as a permanent overshadowing. For one thing as the physical body where this happens is not permanent. But there is a permanent link and when the Christ Consciousness is attained in fullness the disciple then symbolically sits on the throne of God forever.

Question: Why do two mental bodies have to both reside in the same physical body in order to have such a close connection? Isn’t it enough to be closely tied in through the Oneness Principle?

JJ No. The Oneness Principle is not enough for certain types of work. For example, if you attain to the Oneness Principle and then die, your link with this principle remains. In the next world you can tune into the Divine Mind even better than here, but you hare handicapped in doing certain types of work because you have no physical body. Thus, even the disciple who has overcome is drawn back into incarnation to perform service that is not available in the afterlife.

Even so with a Master. There are certain types of service with humanity that require him at times to work directly with the consciousness of a disciple in connection with the physical body.

Comment: As I see it, the only distinction between a divine possession and a demonic possession, besides purpose, is one is voluntary and the other is involuntary.

JJ: There are a number of distinctions and that is one of them. A dark entity will seek to possess by means of the astral body. The disciple thus gains safety for himself by polarizing himself in the mind or above.

The dark entity does not seek to serve but to satisfy selfish desire by force of will.

The Master honors the free will of the disciple, allowing him to make all the decisions while he is visiting. He comes not for self but for loving service. He will leave any time the disciple should make the request.

JJ: This happens all the time through the use of the science of impression. Impressions from a Master are sent and received on the intuitive plane and then penetrate to the lower planes.

But to accomplish certain specific work the Master must descend in consciousness to the plane of the mind and link with the disciple at least this far down.

The Molecular Relationship cannot be established by using the intuitive plane only. A Master must descend to the mind (and the mind linked to the physical) and work with them.

Question: Divine possession, it seems to me is portrayed at the ultimate contact with the higher lives, but it is also the highest form of contact between us and the DB’s as well. Or am I missing something?

JJ: Those in incarnation who follow the dark path do not want to be possessed against their will any more than you or I. Standard possession that we hear about is done by very low grade entities and mostly affects the weak minded or emotionally disturbed and has nothing to do with the work of a dark master.

A Dark Master seeks to control disciples through deceit and false promises. One advanced on the dark path can overshadow a disciple, but I am not aware of a possession on the dark side as happens with the Brotherhood of Light where two occupy a body at the same time. If the dark brother does take over he will attempt to force his acolyte completely out.

Divine possession or sharing of life and consciousness as happened with Jesus is the highest contact while in a physical body.

Keep in mind that just because we are in a physical body does not mean that the consciousness is polarized there. The disciple is polarized in the mind or higher in or out of the physical.

Question: There are two conflicting quotes. (from DK) One says that Jesus vacated his body so that the Christ could take over. (Note: I have not found a reference where JJ teaches this. He teaches they shared Jesus’ mental body.) and Another quote that says that Jesus was a willing CHANNEL for the powerful will of the Christ. I mention this for two reasons: (1) seeming conflicts about over-shadowing, and (2) the current discussion over the divine origins of the writings of AAB.

JJ: Yes, this is one of the few real contradictions in DK’s writings. I know that Jesus did not vacate his body, but shared it with the Christ. DK seems to also agree with this in most of his comments about the Christ and Jesus working together. It may be possible that Jesus left his body for short periods so the Christ could do certain work, but overall they were both in the same body at the same time. The scriptures also bear witness of this as I have previously quoted. Here is one of many: “the Father is in me, and I in him.” John 10:38

It is also possible that Alice A. Bailey used the word “vacated” when DK intended another.

There are cases where the disciple does vacate his body and trades it with a higher entity so certain work can be accomplished, but this was not one of them. If Jesus was completely vacated from his body he could not have passed through the third and fourth initiations during his life as taught in the Bailey writings.

“I planted some bird seed. A bird came up. Now I don’t know what to feed it”. Steven Wright