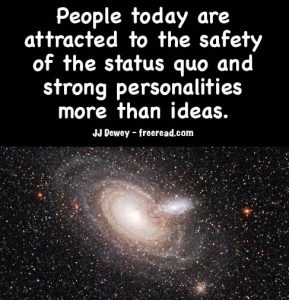 I was asked whose truth I speak of when I use the word.

If I say something like “The truth is…” it should be taken for granted by you that what I say may or may not be correct as indicated in my first 200 posts where I did everything in my power to make you question all authority. The only way you will know for sure about the truth of what I say is to run it by your own souls. If your soul confirms it to you then you should trust it, but if your soul does not you must continue to question until the truth is revealed.

The truth is, I mean My truth is, whoops, I mean that which I see as truth, but that you may see as mumbo jumbo is:

Thoughts and decisions are the beginning of cause which has produced the effect of he entire universe in which we live.

Question: “So is there a universe without Cause and Effect operating?”

To go where there is no cause and effect is to go to a place where you do not exist or have power to decide.

Answer: Both separation AND oneness of life are effects initiated by some cause.

Question: Are not miracles beyond cause and effect?

Answer: No. Anyone capable of such a feat merely has understanding of the levers necessary to accomplish it through cause and effect. Even the raising of the dead is an effect of some cause.

Question: What is the point to ‘going home’, becoming one with our creator?”

Answer: I have news for you. You can’t go home.

The Dark Brothers want us to be happy with the doctrine of just BEING and then wrapping things up and returning home. This makes the people of the world much easier to control through scare tactics.

But when we realize that we are BECOMING beings eternally progressing we discover the truth and the truth sets us free. Free to do what? Free to DECIDE for ourselves and BECOME that which we decide to become.

As we leave home in this world we change, expand and grow and when we return we find that the home we remember no longer exists. Everything has changed, but that is all right. In many ways everything is better than before. Besides we have crated new homes that are even more satisfying than before.

There are many homes, or many mansions, in the spheres of God. As we BECOME we move away from one mansion home and on to another more joyous one.

Finally, after we complete our journeys in this universe we do return home to a oneness with God, but with enhanced intelligence and qualities.

To the modern person driving in a car the sight of a person walking on water is a miracle beyond cause and effect whereas, again, the initiator merely understands cause and effect better than he does.

Any time we see an effect produced here there is a cause that is linked to “here.”

If we were totally operating in some other reality the effects would show up in that reality and would completely bypass this one.

Question: “I am a bit confused about Being and Becoming. Becoming sounds like moving from one point forward, which is a linear process and therefore limiting, whereas I saw Being as encompassing all, including Becoming. Is this the case, but it is really only practical to talk about Becoming in our limited state of consciousness on earth because Being relates to the formless, or non-physical, worlds? Or have I got this mixed up?”

I would say you have this reversed. When you are in the process of BECOMING that part of you which has BEING is coexisting with you as you BECOME. But those lives who have not chosen to BECOME are in a state of BEING only, but always with the possibility of BECOMING. Thus becoming embraces the state of being and becoming, as cooperating states, but those in a state of being alone have nothing to do with becoming.

BECOMING is more like a circular or spiral expansion than a straight line. As you progress your ring-pass-not expands as an expanding atom or solar system.

In actuality you are a circular being. The physical body is merely a nucleus as the center of an atom. Your astral and mental bodies circulate around you making the whole you like a globe or great ball of fire if we could see it. As you become (evolve) your subtle bodies grow and expand, but even this is only one of the expansions incorporated in the process of becoming.

Question: You said that love only exists where there are two, implying that love must be for something or someone. Could you elaborate?

To talk about love with any degree of understanding we need to define it. “Love is the magnetic attractive force that pulls the many into harmonic Oneness, yet allowing for individual identity and free will.”

If there is only one of something there is nothing to attract.

Love is not the fullness of God but one of the three main aspects which are:

These three correspond to:

God had to reflect Itself into a Trinity and then to infinity before Love could manifest.

To say that Love is a state of being that can be experienced while you are completely alone is to theorize about a state that no one in the flesh has ever experienced because it is impossible to ever be alone and have life.

I believe it was BJ who mentioned about being alone with her animals and garden, but these are life forms that enhance Love through their magnetic power.

You are not even alone in your body for there are millions of tiny lives there who are capable of receiving the energy of Love from you. Every cell in your body and every atom is a life form.

True spiritual love could be said to be a state of BEING actively engaged in service of others, service to the whole or bringing the many into united service.

When one experiences higher spiritual contact he or she will have a wonderful feeling of Love, but still we have two or more involved. There is you and there is the Holy Spirit that is contacted. Then there re the many linked through that Spirit.

One could say that when we return to our Source that we rest in oneness but reflect on the many parts gathered in love.

Question: Aren’t there many example to returning home such as returning to spirit or uniting in consciousness with higher lives?

Answer: There are many wonderful feelings that are either an integral part of us or remind us of feelings from past lives that we can associate with “coming home.”

When high spiritual contact is made for the first time in any one life it seems very familiar, because our essential livingness is a reflection of God. As we go through the process of becoming we experience many wonderful feelings that seem familiar, like coming home, but we never really get home because each new expansion of consciousness, livingness and ring-pass-not puts you in a place, or mansion of God, that you have never been in before.

Think of it. Which would you rather do? Go back to your old home and your old school of your youth? Or have a home that evolves and improves as you do, so each time you return for a repose the rest is more glorious?

From one point of view we do return to our home which is God, but when we return our intelligence is enhanced and our eternal home becomes a better place than it was before.

Question: What’s a good way to teach these principles?

Let me tell you a secret I have learned and incorporated in teaching people in person.

One of the few things I learned when I went to church long ago was in a Sunday School class I attended. The teacher was a very relaxed young guy who began the class by asking a question. It was not a run-of-the-mill question, but an interesting question. Then I noticed that he often spent the whole class period of 45 minutes doing nothing but calling on raised hands eager to give their two cents worth.

In some classes he only asked one question, some two, but hardly ever more than three. The teacher always spent over 90 per cent of his time just calling on people, then sitting back and letting them talk.

The funny thing was this guy received all kinds of comments about what a great teacher he was when he did very little actual speaking.

Since then I have done quite a bit of teaching of various sorts and I have found that if I run out of things to say or interest seems to wane then all I needed to do was ask a question and sit back, like the Sunday School teacher, and let the class teach each other.

Someone mentioned that Jesus wanted us to become as little children. This is true but then the scriptures seem to say the opposite here:

So which scripture is correct?

Answer. They both are when you examine the meaning.

Jesus was talking about people who were set in their ways and refused to be opened to new things. In this relationship He was telling us that we must be open-minded as children and be willing to learn to enter the Kingdom of Heaven.

But Paul was also teaching the truth, but instead of attitude he was talking about the learning process itself. He was saying that we grow up and mature we learn better methods and gain knowledge and as we do we put away childish things like believing in Santa just because someone tells you he exists. Yet we should always follow the advice of Jesus and be open to all possibilities.

We must become as open as a child to receive soul contact, but put away childish (unworkable methods) to keep it.