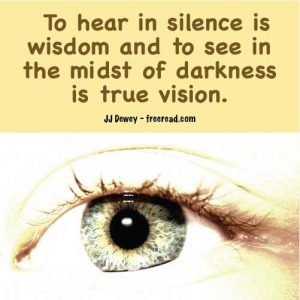 Awareness of the Negative

I received a criticism that the use of “destructive forces” in the Song of the 144,000 was negative and should be changed.

Since it is important that all who say (sing) the Song do so from a viewpoint of understanding I thought I would make some more comments.

On the contrary, let us take the state of homelessness and poverty that exists throughout the world. Now let us suppose that all those who have abundance decided that the words “poverty” and “homeless” were negative words and decided to never use them and attempted to put themselves in a state of mind as if the poor did not exist.

What would be the result?

The result would be that there would be none who would be advocating helping the poor because they could not even mention them and soon the poor of the world would be completely ignored.

I can see it now – the positive person only using positive words as abundance and prosperity as he steps over a homeless beggar because he does not even see him in his reality.

What good is some individual bliss, or even love, if it is not extended down to the so-called negative states so it interplays in the world of duality?

I have watched people throughout my life who fit into three categories.

(1) The extra positive person who makes an effort to not even think a negative thought or say a negative word.

(2) The opposite person who always seems to dwell on the negative.

(3) The person who is positive in attitude, but has no qualms about using a negative word or examining or planning for negative situations.

From my observations I have found that the least successful of these three categories is number one. Now the extra negative people usually do not enjoy high success, but I have been surprised how many of them are moderately successful.

The most successful of these three is number three. He expects the positive, but is prepared to deal with the negative that does surface from time to time.

The situation of the free world previous to World War II illustrates my point. A great war had just been fought and won and no one wanted to even think about the possibility of another war because World War I was the “war to end all wars.” Many peace groups started up with a positive consciousness similar to numerous new age groups today. There was also a boon in channeling and Spirit contact and almost without exception all spiritualists were predicting and speaking only peace up to the final week that the World War actually began.

Many of these groups refused to even consider that war may break out and carefully censored themselves thinking that a purely positive use of words would influence Hitler.

On hindsight it seemed as if the whole free world was asleep to the dangers that awaited them. If they had been aware they would have been able to prepare.

Was there anyone who saw things for what they were, who was “sensitive” to the negative as well as positive possibilities?

There was one man, and unfortunately only one public figure, who dared see the potential negative as well as positive. His name was Winston Churchill.

When he first heard the name Hitler, about seven years before the war something in his soul spoke to him and told him that this man was going to become a great danger to the world. So what did his soul do? Did it tell him to only think positive thoughts and Hitler would go away.

Churchill felt strongly impressed through the soul (and telepathic messages from the Brotherhood) to warn the world of this man and this is what he diligently attempted to do.

For the next seven years, suffering through much criticism and ridicule, he warned the world about the coming Nazi threat. For seven years he concentrated almost entirely on the growing negative situation and was a thorn in the side to the positive feel-good people he saw around him.

Finally when Hitler invaded Poland and England saw that war was upon them because they blissfully were asleep to the negative, a wakening occurred. And who did they turn to?

Mister negative himself. They got rid of mister positive – Chamberlain – and replaced him with Churchill as Prime Minister.

Every time I think of this event I do so with a thankful heart, for after studying World War II I firmly believe that Hitler would have won the war if it were not for Churchill.

The interesting thing is shortly after he became prime minister he gave one of the most positive speeches in the history of the world, the “we will never surrender” speech. This speech was definitely inspired by the Great Ones. I felt moved to tears when I read it.

Now getting back to the Song. The main purpose of the Song at this time is to bring down protection for the Lights of this little planet, for those who will actively work to make the needed changes to bring in the New Age of peace and abundance.

In every past age, despite all attempts to be positive, a very high percentage of these workers have been killed.

The Christ, the greatest of all, was crucified and eleven of his disciples plus thousands of others were killed with torture and violence.

Look at any time in history where disciples worked for positive change and you will see that these brave souls went through tremendous persecution to accomplish their missions.

This age it must be different. And that difference will come not through the focusing on the positive alone, for we live in a world of dualities. Many disciples in ages past tried to concentrate on the positive alone and yet found themselves in traps because of lack of preparation for the negative.

The Song must be said unselfishly. It is true that the saying of it brings peace and personal benefits, but this should not be the prime goal. The prime objective should have the whole group in mind. When you see the light and Love and Power manifesting see it manifesting and helping all the group. If this is done successfully with the same thoughts and words then each individual will receive more spiritual energy than he could possibly give out. But we must be united in thought and word and deed to make this happen. The power we have received from the Song is only a slight foreshadowing of that which is to come if the singing of it is not corrupted.

I want to end by stressing the need for unselfishness in using the gifts of the Spirit. While it is true that Jesus did still the winds, partially due to his inner peace, you will notice that in His three temptations he refused to do any miracle that benefited Himself alone. Every miracle that He performed was to benefit someone else. Even the quieting of the storm was to save His friends.

In our personal lives we are expected to do all we can for ourselves before we receive any help of a miraculous nature. This is why the second son in the parable was not protected. There were many things he could have done to prepare and he did not use the tools God gave him to do so. If anyone was deserving of a miracle it would have been the first son who used all his resources wisely.

I’ll end with a quote from Chapter 46 of he Aquarian Gospel.

IT was a holy day and Jesus walked upon the Athens beach.

2 A storm was on and ships were being tossed about like toys upon the bosom of the sea.

3 The sailors and the fishermen were going down to watery graves; the shores were strewn with bodies of the dead.

4 And Jesus halted not, but with a mighty power he rescued many a helpless one, oft bringing back to life the seeming dead.

5 Now, on these shores were altars sacred to the gods supposed to rule the seas.

6 And men and women, heedless of the cries of drowning men were crowding all about these altars calling on their gods for help.

7 At length the storm was done, and all the sea was calm, and men could think again; and Jesus said,

8 You worshippers of wooden gods, how has the fury of this storm been lessened by your frantic prayers?

9 Where is the strength of these poor, weather-beaten gods with painted swords and crowns?

10 A god that could abide in such a little house could hardly hold a frantic fly, and who could hope that he could hold at bay the Lords of winds and waves?

11 The mighty powers of worlds unseen do not give forth their help till men have done their best; they only help when men can do no more.

12 And you have agonised and prayed around these shrines, and let men sink to death who might have been, by your assistance, saved.

13 The God that saves dwells in your souls, and manifests by making use of your own feet, and legs, and arms, and hands.

14 Strength never comes through idleness; nor through a waiting for another one to bear your loads, or do the work that you are called to do.

15 But when you do your best to bear your loads, and do your work, you offer unto God a sacrifice well-pleasing in his sight.

16 And then the Holy One breathes deep upon your glowing sacrificial coals, and makes them blaze aloft to fill your souls with light, and strength and helpfulness.

17 The most efficient prayer that men can offer to a god of any kind is helpfulness to those in need of help; for what you do for other men the Holy One will do for you.