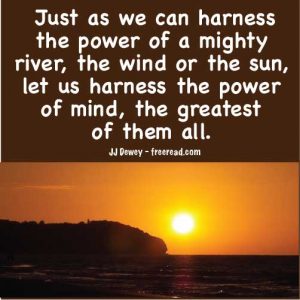 A point was made on cover-ups concerning innovative energy sources. In any industry where considerable money is invested and upon which thousands of jobs depend there will be resistance to any plan that can make them obsolete.

We must understand that this is not evil, but a natural reaction in the present competitive system. Eventually, as abundance for all becomes available, competition will give way to cooperation and this type of resistance will be a thing of the past.

Such a time is still in the future and for the present we must expect this resistance, accept it for what it is and work around it.

I’m sure that there are many inventions that can help humanity that are being covered up, but sooner or later the better ones will always come to the surface – some just take a while.

Tesla had the idea that the earth itself creates unlimited energy through its oscillation and he felt he could invent an antenna that a person could put on his roof and obtain unlimited energy. Too bad he never perfected it. Or maybe he did and we do not know about it.

Comment: “With any form of power, the main rule of conservation should read, don’t take more than you can use or maintain.”

All lives in the universe eventually learn this lesson of the avoidance of waste. The Law of Economy governs this.

The three ingredients necessary for life are a symbol of this abundance: water, earth and air. No matter how many people there are on this little planet there will always be more water than all of the combined inhabitants can use, more earth than necessary to grow plants for us and plenty of air to breath.

But even though we have this abundance note how the cells in our body take all they need, yet not more than they require. They each take the oxygen, water and elements they need, but no more and then allow the other cells to fill their needs with no hoarding or unnecessary waste by any.

Even so, the coming age will be one where use will be efficient, yet the Law of Abundance will also be applied and the wise will have all their needs fulfilled.

This is a lesson that many who call themselves environmentalists need to learn. Some of the radical among this group actually desire an economic collapse, the destruction of industry, of technology, of capitalism and a return to a life style similar to the Amish. Many seem to think it is evil that we use as much energy as we do and want to see us sacrifice our needs as a matter of principle whether it is necessary or not.

Believe me, the new age will not be highlighted by barn building, slopping hogs and reading by candlelight. Instead, look more in the direction of advanced technology, right human relations and a more abundant life that was thought possible in any previous age of our remembrance.

A reader gave good references and made the excellent point that instead of threatening the oil industry with extinction that they should be encouraged to shift some of their attention to alternative fuels so they will not go out of business when we make the shift.

The bottom line is that big business must eventually take an interest in alternative fuels to make them a success.

Who would have thought a few years ago that Honda, Mazda, Mercedes Benz, Ford and other giants would take an interest in innovative engines that may do away with oil? They are today, and investing billions in the endeavor.

Let us look at the pros and cons of other alternatives in the mix in present time.

Ethanol. There is a big push for this in Idaho in support of the farm economy. They mix 10% alcohol and 90% petroleum and call it ethanol in this area – gasohol in others.

The advantages of ethanol is that it burns cleaner than regular gas and reduces our dependence on oil. Some claim that it reduces pollutants and carbon within the engine extending its life. There seems to be no disadvantage…

A major drawback is that the creation of ethanol requires the energy contained in a gallon of alcohol plus an additional 48% to produce a gallon of this fuel. In other words it takes one and a half times more energy to produce ethanol than the burning of it will yield. Chances are this energy requirement will come from coal which is one of the highest pollutants. This discounts the environmental advantages from the ethanol, making it possibly worse than oil, all things considered.

The one indisputable advantage, however, is that it reduces our need for foreign oil and helps our farmers survive.

Producing the materials (vast quantities of steel, silicon, glass, and concrete) for deployment of a solar hardware requires substantial energy, often from burning coal. Estimates are all over the place but most think it would take a couple years of solar power to pay back the energy needed to produce the panels and install them.

The greatest pollution problem is space and this item alone will prevent standard solar energy from ever supplying more than a couple percent of our energy needs.

Consider this. If we could convert 100% of the sun’s energy into electricity, a square foot of land at the equator would supply enough energy to light a 125 watt light bulb. But then if we take the night time the variable weather into consideration we would only have enough for a 22 watt bulb. The big problem is that we can only convert about 10% of this into energy so this reduces the power to 2.2 watts. Finally if we move our solar collector to a more probable location in the United States the power is reduced to less than one watt.

To build a solar energy plant equal to the power of a typical coal burning one of a billion watt capacity then would occupy a space of 50 square miles. (Note Written in 2001. Thanks to technology increases that area has been reduced to around 15 square miles in 2020 in an area of high sun. In areas of low sun we could still be at 50 square miles)

To even come close to supplying our energy needs we would need about 500 plants which would require (figuring maintenance roads and access) 25,000 square miles of ground which is equal to the surface area of Connecticut, Delaware, Rhode Island, New Hampshire and New Jersey combined.

It is true we may have a breakthrough in energy conversion, but even if efficiency doubled from 10% to 20% it would remain impractical as a large scale energy source. (Note: today in 2020 we are up to around 20%)

Way back in the Eighties, however, I heard an idea for harnessing solar energy which I thought sounded very practical as an alternative, but have not heard a mention of it since and cannot find anything about it on the internet. It goes like this.

The most efficient solar collector available is right under our noses produced by nature. This is the giant sunflower plant. These flourish in the hot sun, grow very quickly and store a high percentage of the sun’s power.

The idea was to grow large fields of these plants in sun rich areas of Arizona, New Mexico, Texas and other Southern states. After they are mature we would then harvest and dry them. The dried sun flowers would then be taken to a specially built power plant and burned for fuel to be turned into electricity.

The advantages over coal here are numerous.

(1) There is no dangerous or disruptive mining involved. (2) With the technology available today the new plants could burn the sunflowers with few emissions and very little pollution. The major pollutants in coal such as mercury and uranium are not even in sunflowers though there would be some greenhouse gasses released. (3) The resource is renewable. The ashes could even be used for fertilizer to grow new plants.

This article stated that the deserts of Arizona alone could supply the energy needs of the entire nation.