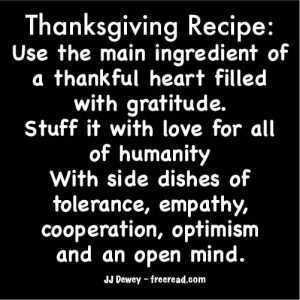 Since today is Thanksgiving in the U.S. I thought I would say a few words about this important topic.

One of the reasons thanksgiving is important is that it is a part of a principle, a corollary of giving and receiving or the basic interplay of male/female energy.

There are two types of giving. The first is constructive or edifying giving and the second is destructive or negative giving.

There is perhaps nothing more pathetic than a person who willingly receives constructive giving with pure intent, yet gives back no appreciation or thanks. You would think this would be a rare occurrence, yet unfortunately its name is legend.

The ability to be thankful is one of the attributes that is supposed to set humans above the animals.

A while back I started feeding nuts to squirrels in my back yard. They seemed happy to receive the nuts, but my reward for feeding them was certainly not thankfulness. Instead, my motivation was to help make their lives a little easier and watching the cute little fellas enjoy themselves. I tried feeding them out of my hand. At first they were afraid but got braver. Finally one came up and bit my hand causing me to drop the nut which he then confiscated. The little ingrate thought he had got away with something by obtaining the nut in this manner.

Now that I have fed them for a year or so, instead of feeling thankful they have a sense of entitlement. If I forget to feed them they come up to my window looking inside with contempt on their faces because I have not fed them yet. Sometimes one will throw his body on the window making a bang to remind me to do my job.

Because thankfulness is the exception and not the rule the true servant must not be motivated by appreciation from those whom he serves. Take a look at the greatest servants in history and you will see that many of them died having little appreciation from those who received and often members of the inner circle attempted to either steal the glory of the work or destroy the teacher or initiate.

When therefore a parent, a teacher, or servant receives appreciation for his labors from those whose consciousness has risen above the littler squirrels his heart indeed is warmed. I would imagine that even the highest of masters, or beings who rub shoulders with the Gods appreciate a thankful heart. Sure they can and will continue to serve and to help but even the Great Ones are enhanced in their sense of being by a simple thank you.

It is interesting that there is one school of thought who believes that the key principle in overcoming death is simple thankfulness. This feat is not that simple, yet one may rest assured that he will not receive the keys of life and death without having a thankful heart.

We live in a cycle where people would rather see themselves as victims seeking to sue at the drop of a hat taking revenge on those who offended them. Many who should be thankful seek to extract a pound of flesh from those who are simply seeking to serve and to help.

We all saw the recent rescue of coal miners in Pennsylvania. They seemed thankful for a short time for all the sacrifice of their brothers who worked might and day to save their lives. Afterwards the rescued miners received a bundle of money from a book and movie deal. Their fellow miners could handle that but what they could not handle was what happened when attorneys told the now wealthy rescued miners how they could make another bundle. If they sued their employer for all he was worth then they could obtain more money still. This temptation was more than they could resist and the last I heard they are proceeding with a lawsuit.

If the suit succeeds then the company will go under and all their fellow miners who rescued them will loose their jobs.

Imagine how these miners feel. They went to great sacrifice to save the trapped miners lives and soon after they are saved the now rich miners turn on their friends and may be responsible for the loss of their jobs.

What could have produced wonderful good will with a little extended appreciation has now caused the threatened miners to totally despise their previous friends.

The true disciple must always look for opportunities to give thanks, to rise above victimhood. Giving thanks is a means to take control of your destiny, to create positive currents that will cause the wind to be at your back making life for yourself and others easier and sweeter.

I don’t want to bore you with a long list but I am thankful beyond words for the Holy Spirit and the Spirit of truth which rests upon me and opens my eyes in a small way allowing me to shed forth some light to open the eyes of others to some important principles.

Thank you for being my friends.

1 thought on “A Thankful Heart”