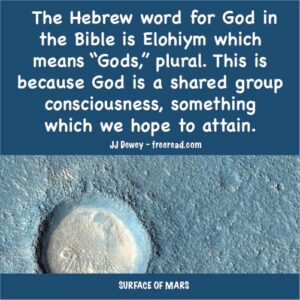 Thanks to Mindy Burge for the transcription

Susan Carter: Welcome to the Gathering of Lights! We have been planning this particular Gathering since September of last year so it is really exciting to see all of you here. I felt very privileged that we were able to have it in Manti again so we didn’t have to travel too far but we have some people who have traveled a long, long way and we thank you for coming. It’ll be a lot of fun. I don’t know that JJ needs an introduction but I’ll introduce him anyway. His name is Joseph John Dewey and he’s fifty something. His wife is Artie and she is the heart of the home. They live in Boise, Idaho. JJ and I met over the internet like you met him. We met November 25, 1999. So it’s been awhile. I met him in June and I and I was expecting this very loud, strong person because of the way he writes. When I met him I said, “Who is that? He’s a quiet man.” But he doesn’t write quiet. He writes with power and that’s why I think all of us are here; because of the power we feel. Our souls telling us there is truth in the words that he has written. So, I am very glad that he has a heart, a mind and a soul that are open to being taught so he could turn around and teach. I’m very appreciative of that… I’d like to now turn the time over to JJ.

JJ: Are we ready for a good time? Susan said I was soft spoken and all this time I thought I was a dynamic individual.

I’ve told the story before of when I was young and my favorite singer was Del Shannon. If you remember, he sang the song Runaway and his falsetto goes wa wa wa wa wonder. I tried to copy him. It was before the days when everyone had tape recorders. I never knew what my voice sounded like. I really studied his songs and memorized them. I thought I sounded just as good as he did.

One time my dad came home with a tape recorder he had borrowed from a friend. He said, “I want you to sing that song you’ve been singing, that runaway thing. Sing it in this.” So I sang it in the mike. Then, with a big grin on his face, he said, “We’re going to play this back to you.” He played it back to me and I was horrified. I didn’t sound anything like I thought I sounded. That really woke me up to the fact that I wasn’t going to be a rock star.

JJ: And more than that? Jesus says, ‘Ye are what?’ So what do we need to be awakened to? The Bible says, ‘In the beginning God created us how?’ In His image. What does that mean? What does it mean to be created in the image of God? Relate that to the fact that Jesus said, “Ye are gods.” If you are an exact reflection of God, then what are you? You’re a god too. Is this something that we need to be awakened to? If you are awakened to the fact that you are a direct reflection of God-In the beginning God created man and woman in His image. In the image of God, created He them.

The word for ‘image’ in Hebrew is the same word that the word ‘photograph’ is derived. So it means we are like a photograph of God, an exact reflection of God with all the attributes of God within us. The scriptures speaking of Christ say He had the fullness of God within Him then they go on to tell us that we are the sons of God even as He is and as He is, we are supposed to be. “Be ye therefore perfect even as your Father in heaven is perfect,” and all these different things giving us the idea that we are something more than human.

Not all of us can walk on water or do some of the things that Christ did. In other words, we are a little bit lower than the gods but our consciousness is capable of taking us back to fulfill the measure of our creation which is what? To be a reflection – to be in the image of God.

In the scriptures, “God” is translated from the word ‘Elohim’ which doesn’t mean God. It’s actually plural. The English Bible says, “In the beginning God created the Heavens and the Earth.” It literally reads in Hebrew, “In the beginning, (even the word ‘beginning’ is a mistranslation but for practical purposes we’ll use it) the gods creates the Heaven and the Earth.” It’s an odd wording. It’s a plural word used with a singular verb-creates. Any idea why that would be?

What’s a plural word that is used with a singular verb that could be compared to God? We have an example right here  with our group. Do we say ‘the group is’ or ‘the group are’? The group IS but the group is more than one, right? In the beginning the council created the Heavens and the Earth. The council creates. The council is more than one, right? Elohim actually means a council or the group of gods got together and created the heavens and the earth, as it pertains to us anyway. Of course, there are many different hierarchies of beings.

Right above us is what we call the spiritual hierarchy of the planet. This is composed of Christ and His group of associates. Above Him is he who the Christ referred to as His Father in Heaven and these are the residents of Shamballa. This is the hierarchy which is above the kingdom of God. We have all kinds of different hierarchies. Above the hierarchy here we would have the Solar Logos which is an entity that presides over our entire solar system.

He, as an entity, represents that principle for this planet more perfectly than any other individual does, so He, has a position, called the Christ. On each earth that is peopled like this one, there is a Christ and a planetary Logos who is called the Ancient of Days who presides over the entire planet. Over us is the Christ and over Christ is the one we call the Ancient of Days that presides over this entire planet. So we have all kinds of different connections here.

The warning message we sent the Russians was a calculated ambiguity that would be clearly understood. Alexander Haig