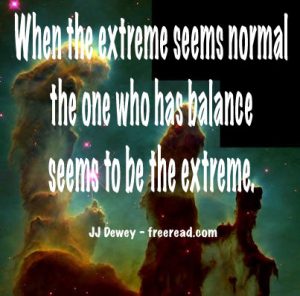 Why would balance be so essential to the disciple and why would a balanced nature often bring conflict?

Almost all people, with the exception of high disciples and adepts, swing back and forth like pendulums and only take a passing peek at the true midway point as they swing by it.

It is the nature of almost all people to want to take a particular side, left or right, black or white, born again or new age.

What is the reason for this?

The answer: Because they do not have to think. When a particular side is taken there is always a special set of answers peculiar to that side and when one extreme or the other is embraced then one does not have to make any decisions or do any thinking because everything has been pre-formulated.

Because of this tendency to take a side where formula answers exist the majority of people therefore turn into extremists, but because there are so many on each side of the extreme, the extremes seem normal. Where the extreme seems normal the one who has balance seems to be the extreme.

Here is an example

Many people in all religions believe that only this planet supports life. This belief is maintained even though it is the only one little orb in this universe of billions of galaxies with billions of star systems. All the lights in the sky are just for us to look at and enjoy.

When you think of it this is indeed an extreme view not supported by logical or balanced thought.

Many religions believe that a simple declaration of faith will suddenly make them enamored in the eyes of God and He will prepare a blissful place for then for eternity while more pleasant people who do not make the declaration will suffer untold torture for eternity.

Does this idea seem balanced or extreme when you think about it?

Many religious people believe that the earth and universe is only 6-10,000 years old even though there are mountains of evidence against it including the fact that we have spotted galaxies whose light has taken twelve billion years to reach us.

Metaphysical and new age people laugh at the religious extreme, but how about them? Are they also affected? Let’s take a look.

Many believe they are somehow immortal or al least just about immortal. Why? Merely because they believe it to be so or some alien (Zor) is coming to transform them. The question is why would the aliens pick them over a bunch of ranchers in Grangeville, Idaho? Or why would a mere act of belief make them immortal any more than the born againers belief will cart him off to heaven?

We indeed have extremes on both sides of the belief system?

Is it extremism to believe that two opposing doctrines are both correct? Verily, yes – unless there is some good explanation that tells us of a misunderstanding.

Many believe that they have escaped the world of duality and live beyond polarity in bliss and oneness. But when you think about it your body, as well as the earth around us, are created out of duality. The duality of a positive nucleus circled by negative electrons in the atoms create all our material forms. If we really escape duality then our bodies, this earth and universe would disappear as A Course in Miracles teaches. If we still see the world around us then we are still in duality.

Isn’t it extreme to believe that we are not affected by duality? Yes again. If you do not believe me stick your hand in boiling water and see if the duality affects you. Ask yourself why you even live in a house or apartment which protects you from the dualities of wind, rain and cold.

Thus we see that there are extremists on both sides. And what happens when a balanced person who looks at both sides, makes an independent logical conclusion and tells them his opinion?

If he tells the religious one that he is not saved any more than any other decent person such a one will often become angry, not because of an attack from an extreme position, but because of balanced view.

Thus we see that balance in the disciple often leads to the path of high resistance and much discipline and perseverance is needed to plow through the strange teachings before a small path of real truth is open to view.

Here are the qualities of the disciple mentioned so far:

(7) The power to initiate

(8) The ability to create and sense a point of tension.

We now come to number 17 which is, “Understanding and making efficient use of time.”

How can we become more efficient in time management?

How can we avoid wasting time?

Is it possible to perform more than one task at a time?

What is the principle behind the Sabbath of rest?