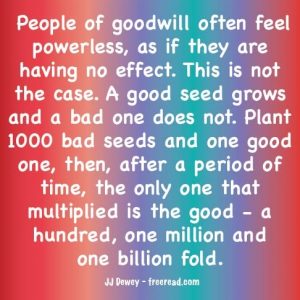 Just a few comments for those who may have a favorite writer or teacher who may be controversial.

About all we can do in this regard is to seek and present true principles behind revelation and the discovery of truth in the hope that seekers will benefit and sharpen their discernment skills as they proceed along the path.

I’m sure all of us have been inspired by a writing or teacher and then, as greater light came, we moved on. Then on reflection we may have wondered why we were attracted to the teaching to begin with.

The truth is that each of these teachings we find (when the heart is pure) are stepping stones to greater reality.

That which we know now may seem as illusion when several more veils are removed from the heart of God.

Therefore, each of us must proceed with the highest light we have and milk each doctrine that catches our attention until our cup is full. Then the next step will be revealed.

None of the teachers are all right or all wrong. Some are merely closer to the truth than others.

Some in the group feel that Ramtha has something to offer, others do not. The Ramtha group has sold hundreds of my books as well as other helpful books on their list so this and other organizations do provide stepping stones of knowledge in addition to their own teachings.

Again, the important thing to acquire, even above an inspired teacher, is personal soul contact. With soul contact truth can be gleamed from writings filled with illusion. With no soul contact illusion will be seen even in presentations of pure truth.

A reader mentions Lobsang Rampa who is suspected by many to be a fraud in some of his claims. I also found him fascinating in his presentation of teachings and have read all his books. Whether his claim of switching a Tibetan body for a Canadian one is true or not, there are many truths to be gleaned from his teachings.

I found the Teachings of the Masters of the Far East very helpful and inspiring when I first began to study metaphysics, but later found out that Baird Spaulding, the author, had not made the trips to India that is claimed in the books. This discovery did not nullify the positive influence it had on my search for truth.

Like many of us in this group I also took a journey through orthodox religion and indeed found much there I decided to leave behind. But I also found many truths to take with me that will be valuable for the rest of my life and beyond.

I want to stress that all are welcome here no matter who their favorite teacher is. All we ask for is an open mind and a sincere heart.

Question: How does one become aware of “imminent attacks by dark forces”?

JJ Those on the left have a totally different vibration from those on the right hand path. Aspirants have difficulty differentiating until they have felt them both in all their variations.

If the Dark Brotherhood are in the attack mode toward a disciple he will be able to easily tell the vibration is negative. If they are, however, merely laying the foundation for deceit they will attempt to simulate the vibration of the Brotherhood of Light. When this happens only an experience with the dualities of the vibrations of light and darkness will lead the person through the deception to the point of truth. The Dark Brothers cannot duplicate the spiritual fire that accompanies a communion with the Christ, his associates or the soul.

Question: Are we to understand that “the dragon” represents one person? A “dark brotherhood”? Or, perhaps, just an attribute that any of us can and do have from time to time?

An important meaning of the negative aspect of the dragon symbol as presented in the Book of Revelations is deceit as I said in my previous post. It also represents initiates of that deceit whether it be one entity or many. In other contexts it can represent wisdom or even salvation as represented by the serpent lifted up by Moses.

John saw a beast that had the appearance of a dragon and thus brings forth a negative interpretation.

Question: If “the dragon” is, say, the attribute of deceit, why not simply refer to deceit as “deceit”? Why the animated disguise? How does that help understanding?

John did not consciously write the Book of Revelation, but received it as a vision and visions and teaching dreams use the language of symbols. Meditation on any symbol will reveal aspects of truth that mere words like “deceit” cannot express.

A reason for the symbolism is that if John were to have plainly written out the meaning of the book it would have been quickly destroyed by the beast of that era.

Question: What is an “unearned authority”? Too often it seems a phrase given to something we would rather not believe might be true.

Unearned authority is quite easy to identify. This is an authority who expects to be followed even though he cannot demonstrate or show a path to the discovery of the truth of his words.

On the other hand, an earned authority is simply one who can demonstrate or show the way to the truth of his words. The student has tested this authority and found him useful. For instance, a Spanish teacher who can speak the language and teach others how to speak is an earned authority after he has been tested by the student.