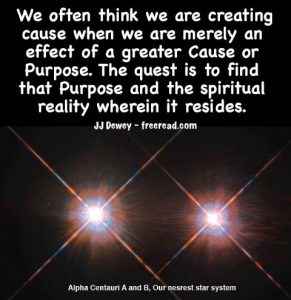 Question: If we wind up marrying several people in this or several lives then who will we be married to in the next world?

There are several things that determine the answer here. First you will forever have the power of decision and this allows you to marry whoever you want in each life in which you find yourself provided the mate is willing.

Secondly, if there is either great love or hate you will be brought together with this person with whom you have intense feelings. If you think you have left a spouse, but still carry hate or grievance, then in reality you have not left them and will meet again.

Question: You say that karma is merely cause and effect yet normally effect immediately follows cause whereas karma is often delayed. Can you elaborate?

Look around you. The whole universe, the earth, your body, tiny cells, down to the atom are creations made through cause and effect. What is obvious, however, is that the many intelligent creations we see around us are the result of causes initiated by great intelligence which are somehow guided into effects testifying to this intelligence. Many of the effects took eons to fully manifest.

While it is true that gravity often seems to play out its effects in a black and white manner it is also true that when intelligence is incorporated into those causes and effects we can have produced an airplane, still subject to the laws of gravity, but having the ability to seemingly transcend them.

You may take a rock from a neighbor’s yard and he cares not a thing about it. Yet you may take another apparently worthless rock from another which may be deemed a priceless possession, the loss of which would cause great consternation.

The taking of one rock causes virtually no effect on the one neighbor, but a great emotional effect on the other, especially if the thief knew the value of the rock to the neighbor.

In the first case all cause was associated with physical action. In the second case the added dimension of emotional attachment was added into the equation making a just law of karma much more complicated to materialize. To make this happen there steps in an intelligent force that manipulates situations so eventually the person who took the second rock will realize the pain of having something valuable stolen from him. It matters little whether the object stolen is a rock or a diamond. What matters is that the offender learns what it feels like to lose an object of value by theft.

One of the things that causes the confusion around karma for the Christian are the orthodox teachings on the atonement and forgiveness of sins.

Many of the things that were called sins (or transgressions) in the days of Jesus were not real causes and effects, but the breaking of laws which had little ort no effect except fort the production of guilt.

For instance, the law commanded the celebration of the Passover. Now suppose you do not celebrate the Passover. Are you damaged in any way? No. Not unless you feel guilt because you displeased an angry God.

They were commanded to offer sacrifice during the new moon. Now suppose you offered it the day after the new moon. Has anything changed? Is there any damage? None, unless one fears offending an angry God.

They were told they could not even eat a piece of bacon. Now let us suppose you grabbed a piece and ate it. Is there any damage outside of guilt for offending an angry God?

The fact is that in the days of Jesus the Jewish people were subject to many laws which had little if any physical cause and effect behind them. Thus when Jesus lead the people to transcend the law he did so not by changing the little cause and effect behind them, but by elevating their conscious ness to the soul to the removal of guilt. When guilt was removed many of the laws became as if they did not even exist.

Many of these laws were not natural laws, but manufactured laws for the purpose of teaching discipline to the ancient Israelites.

Notice that the laws without real effects have almost passed away, but the ones with effects are still in play throughout the world – such as some of the ten commandments as thou shalt not kill, steal bear false witness etc.

Thus the sacrifice of Christ on the cross spoke to the souls of men and released many from conjured up guilt over ephemeral laws, while the law of cause and effect, or karma, remained intact.

Question: Does karma dictate that one who hurts another through an accident has to suffer that same hurt?

If one who caused the accident did all in his power to make things right and had an understanding of the grief he caused there would be no need for him to experience a similar accident to the one he caused. The Agents of Karma could then direct the residual force to move the person to work in the service of his fellowmen.

However, if he had overpowering guilt that he could not shed he may set himself up for an accident as a tool that would remove the guilt.

This is an unnecessary step for those who have atoned with the Christ Consciousness, but many there are who so condemn themselves.